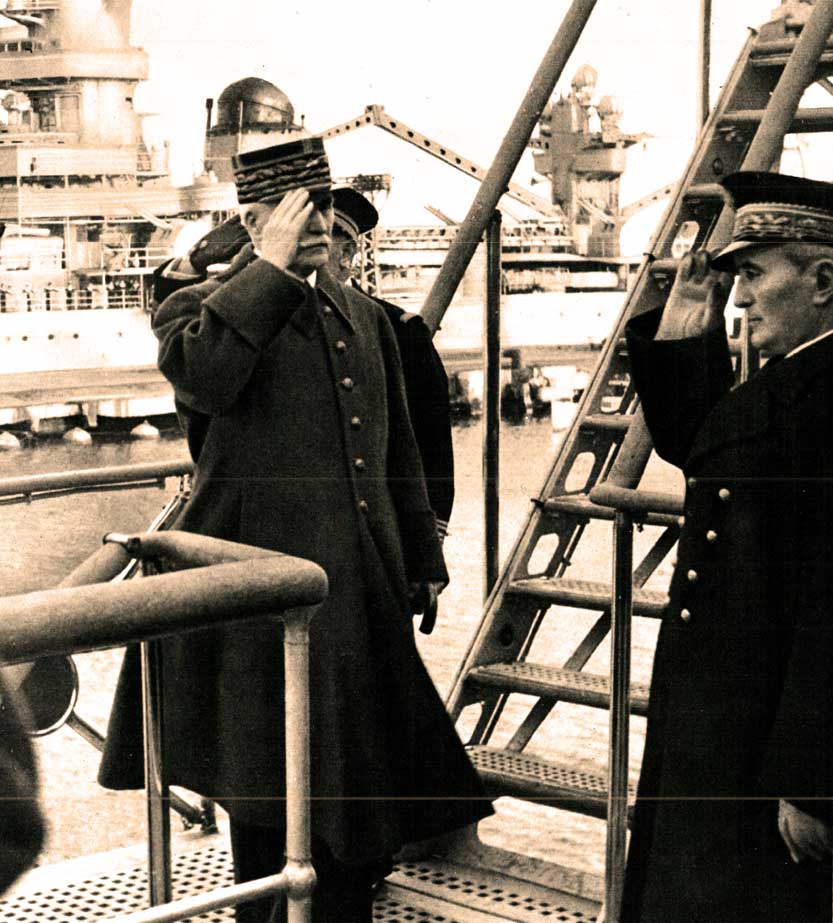 Marshal Petain and Admiral Darlan – Meeting of the mouthpieces.

News for this February 11th in 1941 was primarily about the war in Europe; a war the U.S. was comfortably-but-getting-less-so not directly involved in. We were still very much on the sidelines and still had access to all the contentious centers of attention, some 531 days into it. We were also still freely reporting from Berlin, despite government censorship and were able to report claims and counter-claims on a daily basis, or until tensions ratcheted up further.

But on this day, news was about British raids over Germany. Reports from Berlin claimed 33 British planes were shot down with virtually no German losses and little damage to the city of Hannover in raids overnight . An attempt to reach Berlin by the RAF had failed.  The Germans also claimed the British were now using incendiary bombs, causing fires in a number of civilian neighborhoods, but were rapidly extinguished. They denied any military targets were hit, but indicated the RAF raids resulted in a number of civilian losses.

Reports from Berlin went on to report the situation in France, where the Vichy (or German-run government in France) government was rumored to have a shakeup, but which assured Berlin Marshal Petain was still Puppet-in-Charge. Other than that, news was sketchy. News went on regarding the death sentences of 3 Norwegians, accused of spy activities surrounding the seizure of an alleged shortwave radio transmitter, claimed to be used in relaying messages to Britain over German troop movements in Norway. A fourth accused Norwegian was sentenced to five years in prison and two others were acquitted.

Reports from London were different. The news of breaking diplomatic ties with Rumania was greeted with pessimism, although it had been expected, since the Rumanians had been leaning in the direction of Berlin for some time. Still, it was one less country to be counted on as an ally. As for the British version of the overnight raids on Germany – reports claimed the RAF had raided Hannover some 27 times in recent nights. RAF losses were said to be 4 bombers, not 33. Raids also included targets in occupied France, with 2 German fighters shot down and 3 RAF planes reported missing.

Somewhere in the middle was most likely the truth.

Back in the U.S. – not so much talk about war as talk about being Un-American, as the Dies Committee hearings were on the verge of getting continued funding for another 15 months of activitiy. News of the death of former Russian General Walter Kravitsky added an extra dimension to the work of the Committee as it was disclosed that Kravitsky, a former star-witness of the Dies Committee had been most likely murdered, rather than the suicide as initially reported. Lawyers for the General wanted an FBI investigation to begin, since they felt the death was on an International level. Kravitsky defected on the heels of a Stalin purge of officers, claiming some 35,000 officers were liquidated. Fears were the Kravitsky death was at the hands of Russian agents.

All that, and a lot more for news on this February 11th in 1941 as presented by the NBC-Blue Network’s News Of The World.