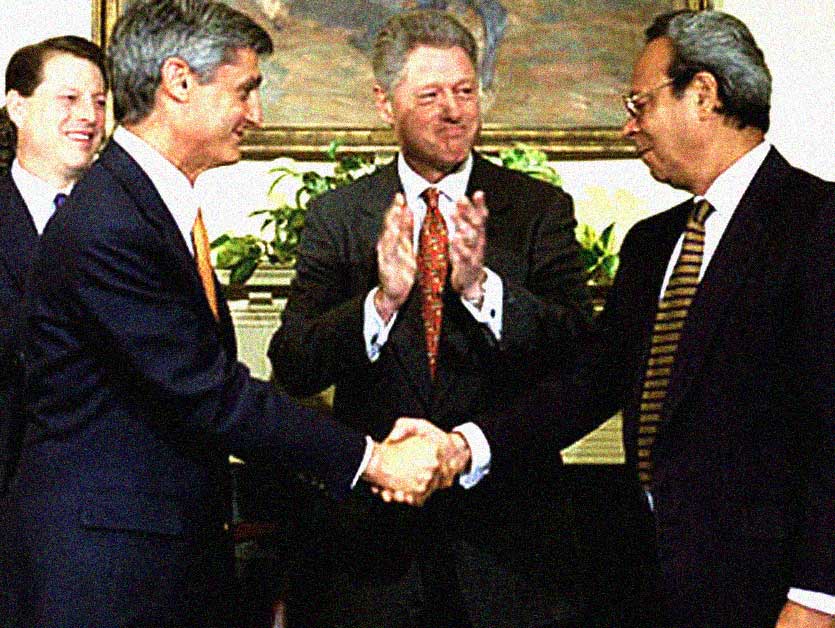 Not really an earth-shattering day, unless you consider the long-term implications of a $20 billion loan to Mexico, the merger of Fleet Financial with Shawmut National Bank, putting it in the top-10 banks in the country, or the on-going OJ Simpson “trial of the century”. That’s what February 21st looked and sounded like in 1995.

The $20 billion loan between the U.S. and Mexico was an emergency measure aimed at bailing out the floundering Peso. The gesture, though not disclosed at the time of this broadcast, was rumored to be loaded with caveats. The anticipated joint announcement, by Treasury Secretary Bob Rubin and Mexican Finance Minister Guillermo Ortiz was slated to include the disclosure that Mexican oil revenues were to be put in an escrow account as collateral. There was also a U.S. demand Mexico tighten its credit and shrink its money supply. That demand came with an immediate reply from the Mexican Central Bank by boosting its interest rates a whopping 50%.

The Bank merger was another matter – and most likely one which would  likely be the source of many headaches and sleepless nights, come 2008. The merger between Fleet Financial and Shawmut National Bank of Massachusets set the stage for Fleet to jump into the top 10 of largest banks in the U.S. – the merger was said to be in the neighborhood of $3.7 billion. Analysts were crowing that the new wave of mergers was having a positive effect on the banking industry by reducing redundant expenses. One of those redundancies was the instant loss of some 3,000 jobs. Death, where is thy sting?

Speaking of death – The OJ Simpson murder/Crime-of-the-century/Media Circus Trial was getting ready to reconvene after a three-day break.  Poised to assume center stage was the presentation of more crime-scene evidence by the Marcia Clark and The Prosecution. Prior to the weekend break, the Jury had the opportunity to mull over a bloody glove and ski-cap found at the crime scene. Next witness to appear before the Jury was slated to be Brian “Kato” Kalin.

And that was a small, seemingly insignificant portion of what went on this February 21st in 1995, as reported by Mitchell Krauss, substituting for Bill Lynch and The CBS World News Roundup.