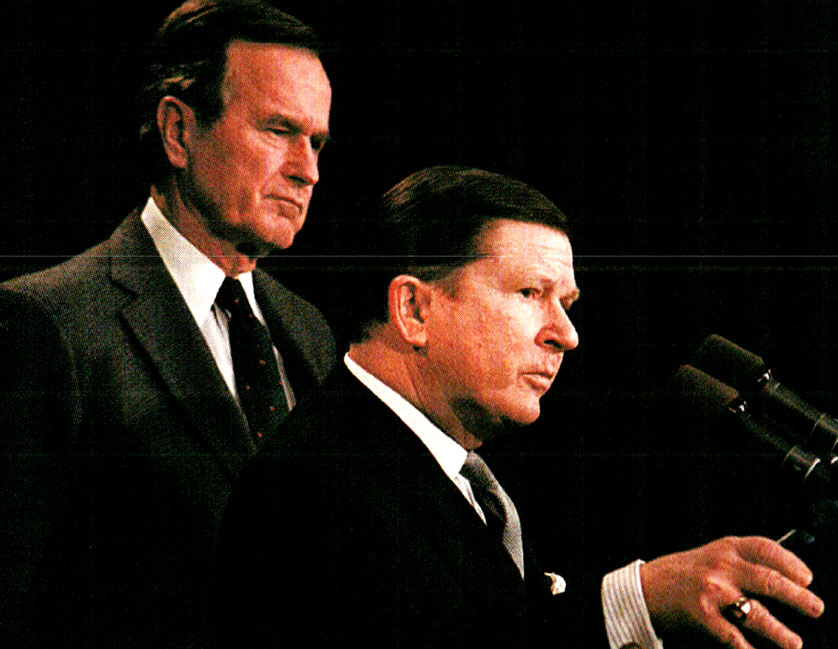 Bush with appointee John Tower - "What, me drunk?"

Bush with appointee John Tower – “What, me a drunk?”

News for this February 26th in 1989 had much to do with President Bush’s tour of China. On this last day of his visit, Bush threw a “Texas-style” barbecue for his Chinese hosts, complete with Lone Star Beer, Texas Beef, but missing a few Chinese dissidents, including Fang Lizhi who had been invited to the barbecue, but uninvited at the last minute and kept away by police.

Seems even America “land of the free-home of the brave” was willing to overlook a few Human Rights issues when it came to politics.

But human frailty issues were another thing. Bush appointee to head up the Defense Department, John Tower was coming under fire for what many charged was his drinking problem. Tower went on the offensive, pledging “never to drink as long as he was Defense Secretary”. Oh . . . . sure.

The Senate was expected to take a vote on Tower’s nomination later on in the week.

Attempts at a warming of relations between the USSR and Iran was underway. Soviet Foreign Minister Eduard Shevardnadze was meeting with Ayatollah Khomeini in Tehran who said he welcomed a better relationship with Moscow to “help fight the devilish acts of the West”. This in relation to the West’s embracing of author Salman Rushdie.

And that’s some of what went on this February 26th in 1989 (it was a Sunday then), as reported by CBS Radio News on the Hour.