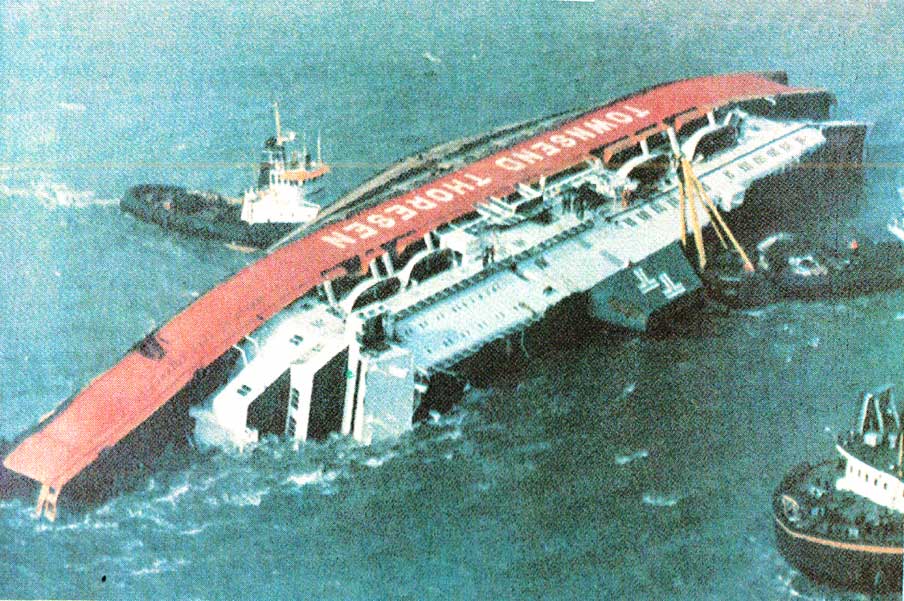 The sea was calm - the torrent was not.

The sea was calm – the torrent was not.

News for this March 7th in 1987 started off with word of a tragedy in the English Channel on a run from Belgium. In otherwise calm seas, a British Ferry Boat suddenly listed and turned on its side, capsizing and killing some 49 with many missing and feared trapped.  It was thought the 8,000 ton ship either struck a harbor wall or sand bank, forcing open the cargo doors on the Bow, causing the ship to quickly flood with sea water. There was no sound of bang or collision, leading investigators to the conclusion that water had gotten into the Auto deck of the boat – a finding which had been discovered in 1980 with precautions issued that such an event was likely to occur and that a boat would capsize so quickly, passengers would not be able to escape. Small comfort to the drowned.

And there was other news. The Geneva Arms talks were continuing, with discussion about compromise in the area of Medium Range Missiles and renewed speculation of another Reagan-Gorbachev Summit meeting. Confirmed was Secretary of State Shultz going to Moscow in April to meet with Soviet Foreign Minister Eduard Shevardnadze to go over a host of issues, including Human Rights as well as Arms talks. The White House was sounding upbeat about the prospects.

Which was good, because the cloud of Iran-Contra was the houseguest who refused to leave and it threatened to cast a pall over the remainder of the Reagan Presidency. When asked, President Reagan muttered that “in his old business” it was customary to leave something for the Third Act. Reagan vowed there would be a wowzer climax. The mind fairly reeled at the prospects.

And news of the sudden death by heart attack of the Nebraska Senior Senator Edward Zorinsky had many on Capitol Hill in shock. Zorinsky, a lifelong Republican until switching parties in 1976, was taking part in a skit at the annual dinner of the Omaha Press Club when he complained of chest pains and collapsed. He was 58.

Other notables facing health issues on this day – Jazz Drummer Buddy Rich was diagnosed with an inoperable Brain Tumor. The 69 year old Drummer was admitted to UCLA Medical Center and was reported in fair condition and “resting comfortably”. It was not determined whether Rich would undergo Chemotherapy or not.

And on this day, the axe fell at CBS News, with more than 200 jobs on the block as the result of cost-cutting measures and the gradual, but steady erosion of news departments at the networks. Among the casualties was veteran Washington correspondent Ike Pappas who said those remaining had the toughest job because, as he remarked “they don’t work for CBS News – they have the label, it’s not the same”.

Truer and more prophetic words were never spoken. I’m sure the analogy between the capsized boat and the upturned News Department wasn’t lost among many in the Fourth Estate.

And that’s how this day went, via the rapidly eroding and diminishing CBS World News Roundup for March 7, 1987.