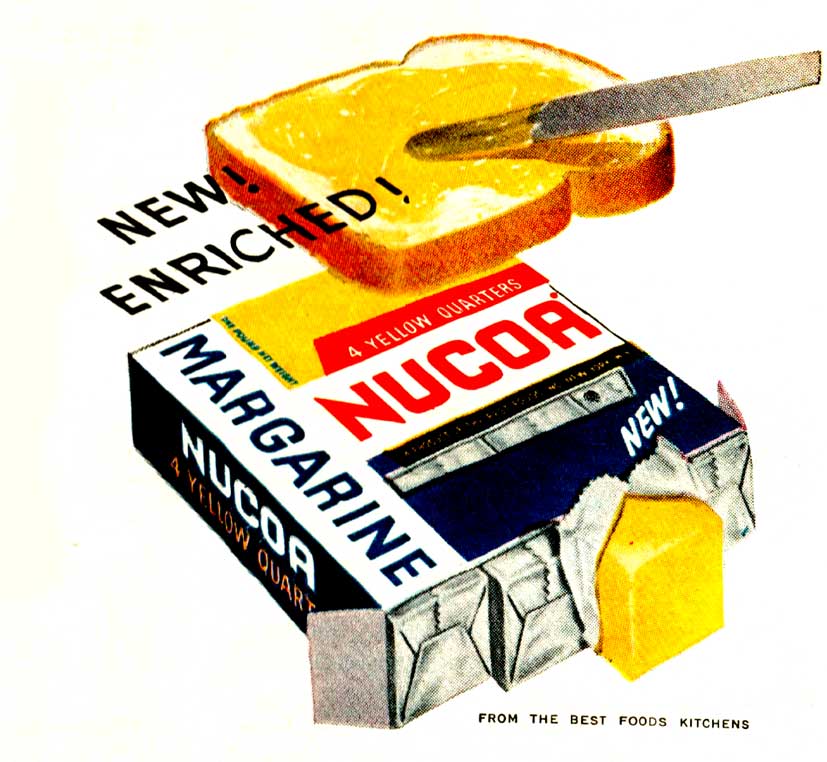 Believe it or not, a controversy that went on since the 1800's.

Believe it or not, a controversy that went on since the 1800’s, but not all that different now.

Strange as it may seem now, the controversy over a Tax placed on Margarine which was colored yellow, had been going on since the mid-1800s. By the late 1940s it had reached a boiling point. The issue wasn’t the Margarine itself, that was originally white – it had something to do with the coloring used in making the margarine yellow.

The controversy surrounded whether to maintain the 1/4 cent per pound tax on plain (uncolored) margarine or a 10 cent tax on margarine which was colored yellow. No other color was under consideration. There would be no additional tax if the margarine was colored green, for example – just yellow.

The reason for all the brouhaha was the idea that oleomargarine, created as a synthetic replacement for Butter, would be seen as competition for the Butter market. Putting a stick of Butter next to a stick of plain Margarine, the difference was clearly evident. But with Margarine colored to resemble Butter, it was thought by some, particularly in the Dairy Industry that Margarine was a counterfeit product, and therefore shouldn’t resemble Butter in any way. Hence the proposed tax. It was argued that the controversy and the idea of a tax initially arose from the Public, who believed they were deceived into buying what was considered by many to be an inferior product.

In this broadcast, part of the CBS Radio Series Cross-Section U.S.A., several people were asked, from industry professionals to consumers, how they felt about the tax and this controversy.

Fascinating stuff – seemingly perplexing that so much time and energy would be put into something as seemingly trivial as this. But it all boiled down to unfair competition and charges of counterfeit of an original product. Needless to say, the idea of a synthetic product being developed to counter the real one echoes issues in the High-Tech and Pharmaceutical industries today.

Here is that debate over the Oleomargarine Tax as heard on CBS Radio’s Cross-Section U.S.A. for March 13, 1948.