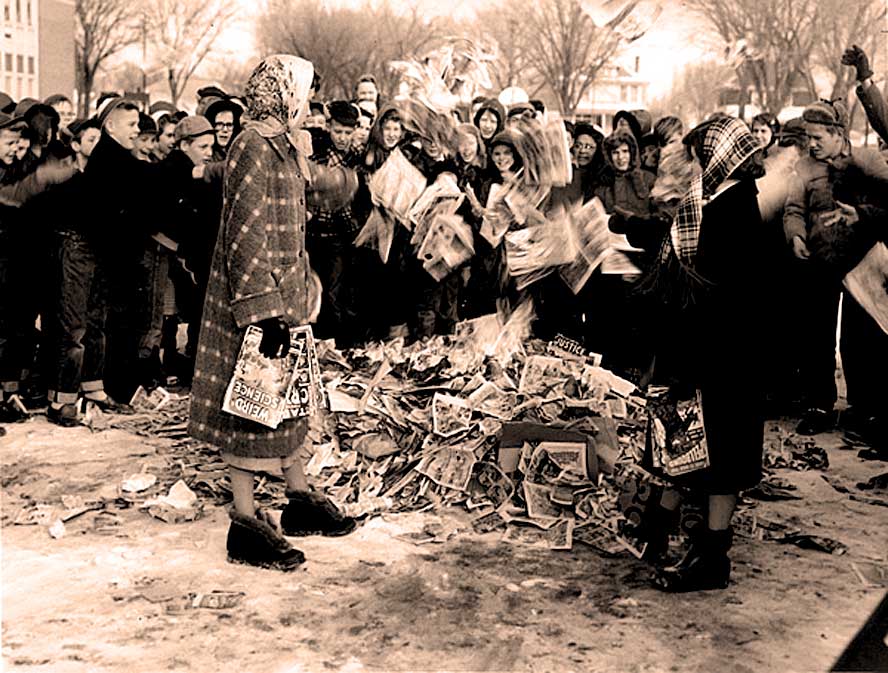 Banning and burning - Letting someone else do the thinking for you.

Banning and burning – Letting someone else do the thinking for you until it’s too late.

One of the prevalent memories of the “carefree” 1950s was the preoccupation much of our society had with reading material deemed obscene,and the various organizations and movements afoot, pledged to rid every bookstore, magazine stand and library with materials deemed to be morally  objectionable. How a small segment of our society had somehow put themselves in the position of being arbiters of taste and values, was something of a mystery. But in the time of Red Scares and Cold Wars, anyone could get away with just about anything, just so long as they dangled the Communist carrot for all to see.

Initially, the big issue was over comics and the perceived increase in portrayals of sadism and extreme violence depicted in the brightly colored pages. But then the jaundiced eye turned to literature – fiction – writers; many of whom had been dead for the better part of a century. And the same Witch-Hunt mentality which overtook Hollywood was now in danger of overtaking the Literary world. I remember when practically every novel by Henry Miller was routinely taken off shelves and burned, and how even Mark Twain had people wondering. So frightening were the implications of our society turning into a mass of luddites and prudes, that even authors such as Ray Bradbury wrote masterpieces of protest (Fahrenheit 451) as a way of drawing attention to an ugly plight.

As the Censorship craze reached its peak in 1957, serious questions were being raised as to just what the motives of all these banning and burnings were all about. Who was behind them?

Since media in the 1950s was still actually engaged in curiosity, the program Open Mind presented a panel discussion on Book Censorship, consisting of a series of programs dealing with the issue. This first one – Book Censorhip featured Anne Freemantle, editor of the Catholic Book Club,  Morris Ernst, attorney engaged in a number of censorship and civil liberties cases, and Dan Lacey, managing Director of the American Book Publishing Council.

Here is that Open Mind discussion from February 24, 1957.