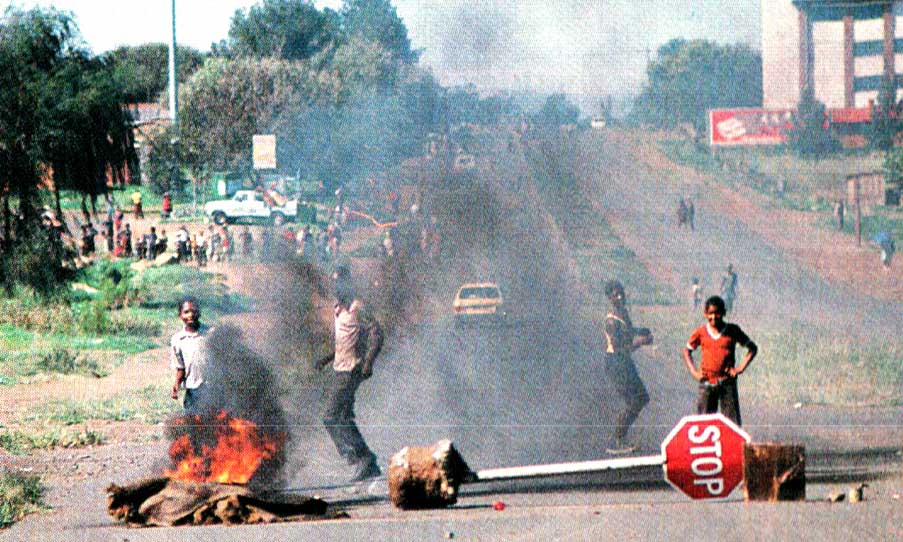 The view from Sharpeville.

The view from Sharpeville.

News for this day in 1985 began with an Angry commemoration – March 21st 1985 marked the 25th anniversary of the massacre in Sharpeville, South Africa where 69 Blacks were gunned down by South African police during a demonstration protesting laws requiring Blacks to carry identity documents on March 25, 1960. The laws were still on the books in 1985, and the anniversary drew demonstrations all over South Africa on this day. One demonstration, taking place near the White suburb of Port Elizabeth, resulted in Police killing 16 blacks and wounding dozens more. Police claimed the crowd of several thousand refused to stop and proceeded to throws stones and spears. Eyewitnesses claimed the police opened fire, unprovoked and indiscriminately. And the outrage continued.

Meanwhile, a Military operation involving Israeli troops was unfolding in Lebanon. Israeli Army officials confirmed the raid of two Lebanese Shiite villages just north of the Israeli border had killed some 20 suspected terrorists and unearthed a large cache of weapons and ammunition. Even though Israel was withdrawing its troops from Lebanon, the action was aimed at protecting its forces from terrorist attacks. The report went on to say the operation had nothing to do with the ongoing civil war between Muslim and Christian militias fighting in Sidon. Lebanon claimed the action was against 9 Shiite villages and was considered a stalling action on the part of Israel.

And in New Delhi, reports came of a Soviet Diplomat, gunned down from a passing motorcycle not far from the Soviet Embassy. It was the second such incident in less than a week involving a Russian Diplomat.

Meanwhile, back home – reports that the economy was in the process of slowing down and inflation was heating up had most on Wall Street and Capitol Hill jittery. Even though spin doctors were quick to fall over themselves, pointing out the data was incomplete and the figures were often revised as more information became available. Still, the worry that the high level of imported goods coming into the U.S. was now having an effect on the worsening situation by robbing U.S. manufacturers of selling goods and slowing down the economy had many scratching their heads. So much for Spring.

And that’s a small chunk of what went on this rather chaotic March 21st in 1985 as presented by The CBS World News Roundup.