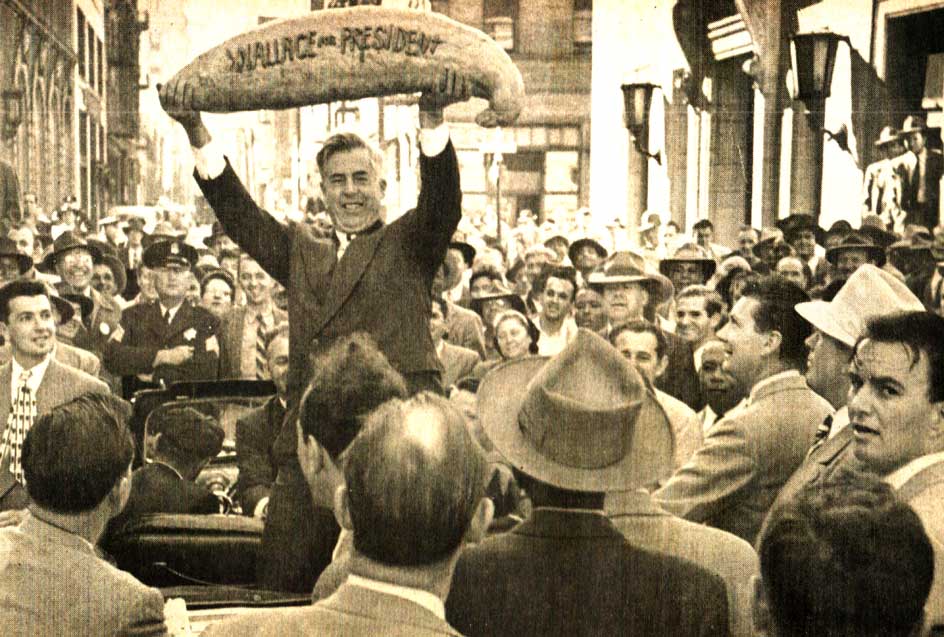 News for this April 14th in 1947 had much to do with the comings-and-goings of former vice-President/former Agriculture Secretary/now third-party Presidential candidate Henry Wallace.

Seems Henry Wallace, in search of some thaw to the intensifying Cold War, was running afoul of the conservative establishment in Washington. Wallace, on a fact-finding tour of Europe, was perceived as saying things not complimentary to the Truman Doctrine regarding Post-war Europe. His meetings with British Prime Minister Clement Atlee and his public denunciation of aspects of the Doctrine caused many on Capitol Hill to toss brickbats at the former VP, including one Republican Senator who urged charges of Treason be leveled at Wallace.

Fortunately for all concerned, President Truman declined to get involved and issued a terse “no comment” to the reports. For all the brickbats, Wallace was getting a considerable amount of praise for his honest attempts at seeking peace.

Meanwhile, the question of what became of the missing $11 billion worth of Lend-Lease aid to Russia was finally being answered after a long silence from Moscow.

And strike talks were continuing with telephone workers. First Day of Baseball was shelved due to the rain in Washington. SCOTUS ruled a returning veteran was entitled to his old job, but not for more than a year. On Capitol hill, the Republicans unveiled two new versions of Labor Law, squaring off with Union officials over their proposed Anti-Strike Laws, which included strikes against public health and public safety and ruled against the Closed Shop. Union head Phillip Murray of the CIO called the measure a “first step towards Fascism”, likewise the AFofL. Seems the tide of anti-Union sentiment was running high all around Capitol Hill, with the Senate introducing a similar bill which also included a Federal court injunction in the case of strikes and a curb on industry-wide bargaining.

Detroit and the Auto Industry averted a second round of strikes by agreeing to a .15 cent an hour wage-increase for Electrical Workers. The Auto Workers were looking for .33 cents an hour – the Auto makers countered with an interim .10 cents an hour wage boost until negotiations took place later on in the Summer. It was all seen as part of a trend by the unions to scale back demands.

And the Moscow Conference of Foreign Ministers was continuing with a generally upbeat feeling over the outcome of this round of talks with issues on Germany still pending. Still, things were looking a bit Spring-like around Moscow on this day.

And that’s just a slice of what happened on this April 14th in 1947, as presented by NBC Radio’s News Of The World.