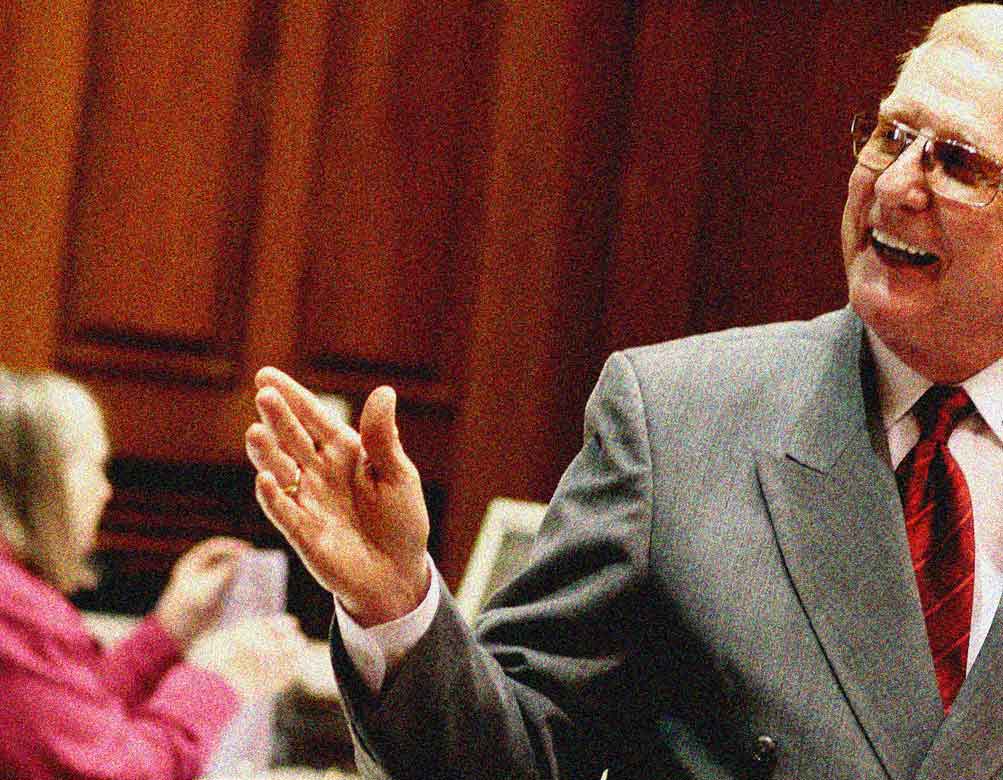 Congressman Dan Burton - "Pay no attention to what the right hand is doing".

Congressman Dan Burton – “Pay no attention to what the right hand is doing”.

An alternately scandalous and hopeful day, this April 16th in 1997. Starting with news that Republican Congressman Dan Burton, Chairman of the House Investigation into Democratic Fundraising practices, wound up himself coming under investigation for his own campaign finance practices.

Seems Burton had received money raised from a tax-exempt religious organization, the Sikh Independence Movement, who had funneled money raised by Sikhs living in the U.S. to 8 members of Congress from both parties. Such organizations are banned from funding political campaigns in the U.S. The revelation caused a ripple of embarrassment through Capitol Hill, and Burton’s lawyers said they would get to the bottom of it.

Another scandal was coming to trial, this one from the Army. A sex scandal at the Aberdeen Proving grounds involving a 23 year-old enlisted woman, repeatedly raped 8 times and beaten by a drill Sergeant over a three month period was sending shock waves throughout the Military. The accused, Staff Sergeant Delmar Simpson could face life in prison for ordering the woman to his office, which was equipped with a bed, forcibly undressing and raping her. The enlisted woman remained silent until she learned she had contracted a case of Chlamydia as a result of the assaults.

On the other side of the world, a scandal was brewing involving Israeli Prime Minister Bibi Netanyahu and the wonder-world of influence peddling. Israeli Police recommended an arrest and resignation, but spokespeople for Netanyahu said the Prime Minister had no intention of resigning or being arrested. Reports surfaced that Netanyahu had appointed an unqualified political crony as Attorney General in the hopes of getting special treatment for a political ally, facing charges of corruption. The crooked webs . . .

Meanwhile, Big Tobacco was engaged in talks with the Attorney General over settlement of legal claims piling up. Attornies for Philip Morris and RJR Nabisco were looking for one settlement, which would surely require Congressional approval before going forward. The implications were many and far-reaching, not only for the public, but for the Tobacco industry as well. Meanwhile, dissident shareholders at the annual meeting for RJR-Nabisco called for a spin-off of the tobacco entity and a retiring of Joe Camel. The Board looked askance and offered “no comment” regarding the talks.

On the plus side – South African President Nelson Mandela was hosting peace talks over the question of Zaire. Zairean Rebel leader Laurent Kabila was meeting with the South African President over the question of establishing peace and ending the six month war in Zaire. Despite the secrecy of the talks, all appeared upbeat and optimistic at their conclusion.

Also upbeat were talks going on in New York between North and South Korea. Secretary of State Madeleine Albright issued a positive statement regarding the ongoing talks, and pleasure that China was getting involved in the process as well.

And that’s just a small portion of what went on, this rather hectic April 16th in 1997, by way of NPR’s All Things Considered.