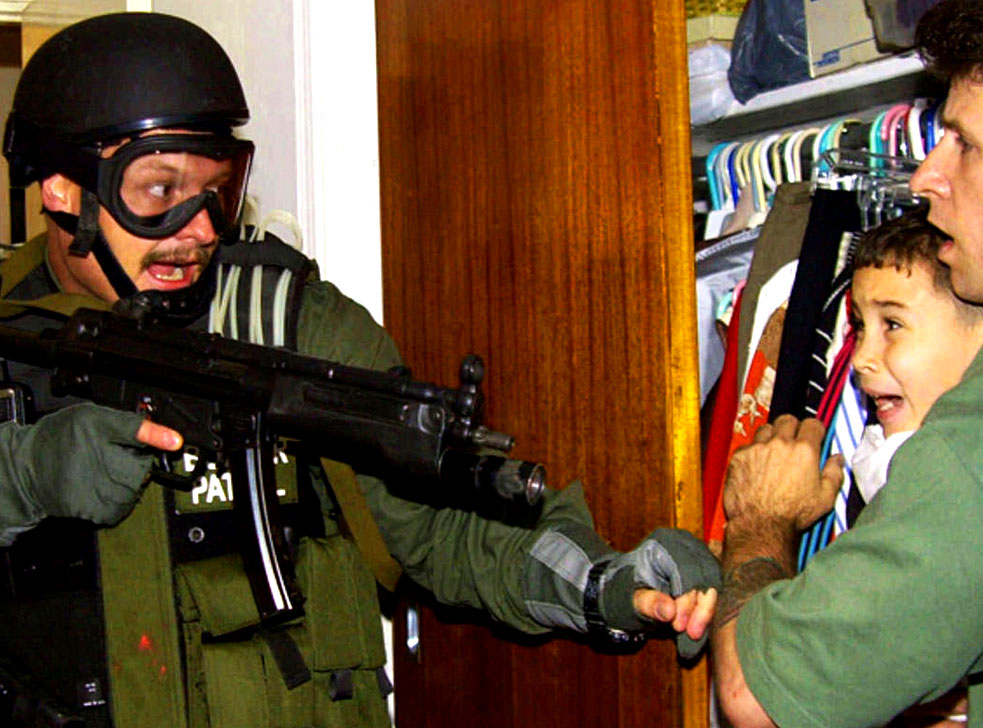 Fourteen years later, the story may be fuzzy - the photo isn't.

Fourteen years later, the story may be fuzzy – the photo isn’t.

This April 22nd in 2000 will probably best be remembered as the day the Feds nabbed Elian Gonzalez and sent him back to Havana.

For those who may have forgotten (the incident, but not the photo), Elian Gonzalez and his mother were refugees, bound for Miami when the aluminum boat they and ten other people were on sank, drowning Elian’s mother, but casting Elian adrift with two other survivors. The boy was picked up by fishermen off the Miami coast and turned over to the U.S. Coast Guard – and then the trouble started.

After months of negotiations, appeals and demonstrations, the Justice Department decided the best thing for the boy was to be back home with his father. So they staged a raid on the home of Elian Gonzalez’ relatives (where he was staying) in Miami early in the morning on April 22nd.

The raid did much to cause rifts and divisions, particularly within the Cuban-American community. Opinions were sharply divided over whether or not sending Elian Gonzalez back to Cuba was the right thing to do, and many blamed Attorney General Janet Reno for using excessive force in retrieving the boy. But both Janet Reno and President Clinton responded that, with tensions running so high, it was thought there would be a violent showdown between the Feds and the Cuban-American community.

So the whole thing lasted around 3 minutes, just long enough for Alan Diaz of Associated Press to grab the iconic series of photos and for a storm of protest to begin.

Gonzalez was taken to Andrews Air Force Base where he was reunited with his Father and be back in Cuba by June.

The controversy kept going, with the rest of the country now weighing in on the incident. The sharply divided opinions within the Cuban-American community were quickly spread, and even the Press now offered different opinions over how the incident should have been handled. It was widely speculated that this incident, which centered on the divisions within the community of Miami-Dade County Florida, may have been a deciding factor over the outcome of the 2000 Presidential elections.

So maybe this seemingly innocuous incident over the fate of a six year-old had bigger implications  in the political world. At the time it was about a tug-of-war between two sets of relatives and two countries who weren’t particularly talking to each other.

And that’s  how it all rolled on this April 22nd, 2000 as viewed by CBS Radio Hourly News.