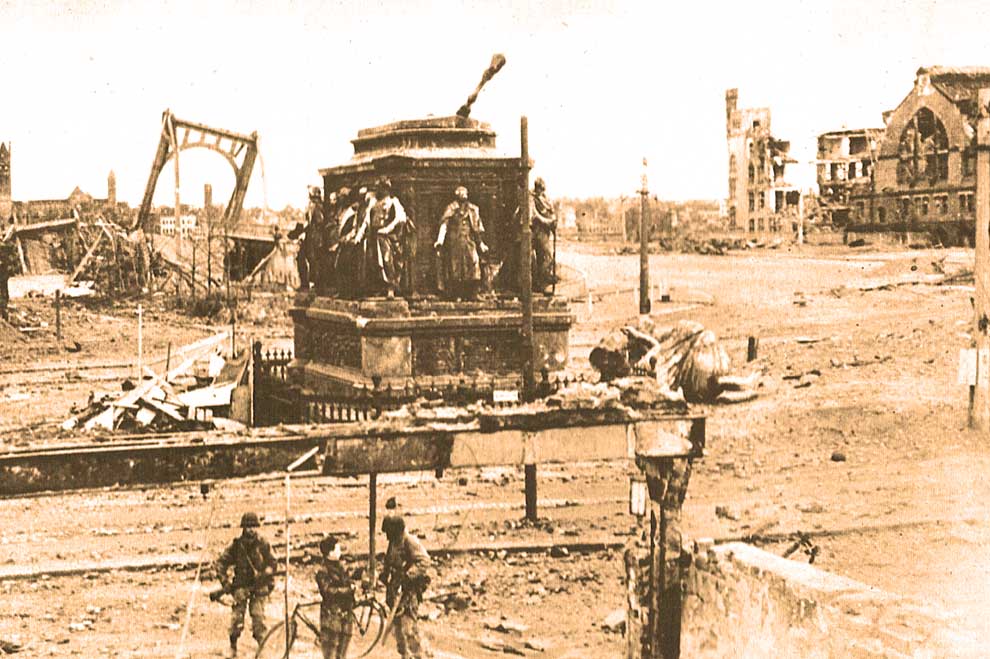 News for this day in 1945 was about the continuing war in Europe, despite an almost constant flood of rumors to the contrary. The latest report disclosed the role of Count Bernadotte of Sweden acting as intermediary between the Allies and Germany. With his return to Germany after the Allies rejection of acting German government head Heinrich Himmler, reports went on to say Bernadotte was heading back to Allied Headquarters with a revised surrender proposal from Himmler. Repeated warnings not to believe reports of a German surrender were emphatic, since just about every reporter in Europe was angling to get the “scoop” on official surrender news. Even though surrender was imminent, there was still considerable fighting going on. Word was expected from Moscow almost any moment that Berlin had fallen to the Red Army.  Reports were coming in that the Russians had taken almost complete control of the capitol. Meanwhile, the U.S. 7th Army entered Munich, as well as liberating the Concentration Camp at Dachau, just northwest of Munich . The 3rd Army was surging toward Berchtesgaden, and at last report was 75 miles from Hitler’s hideout. The British Army had crossed the Elbe River east of Hamburg. It was announced by the new Italian government that former Dictator Benito Mussolini and several associates had been executed by Italian Partisans.

Meanwhile, the San Francisco Conference meeting was continuing, amid a flurry of anticipation. A lot of work needed to be done and it needed to be done fast. Delegates were working overtime, drafting resolutions, setting up committees before the Conference was scheduled to conclude within a few days. With end of the war in Europe an eventual reality within days, not weeks, the necessity to set up the governing body and councils was of utmost importance.

The fighting in the Pacific was continuing, with U.S. forces advancing on two airfields in southern Okinawa. It was also reported that casualties from the Okinawa invasion so far (as of April 30th) were some 11,000 killed, including some 29 Medical personnel when a suicide air attack on the hospital ship USS Comfort, crashed into the stern of the ship some 50 miles south of Okinawa, killing 5 Medical officers and 24 nurses.

And that’s a sampling of what went on this last day of April, 1945 as reported on NBC’s News Of The World and World News Roundup.