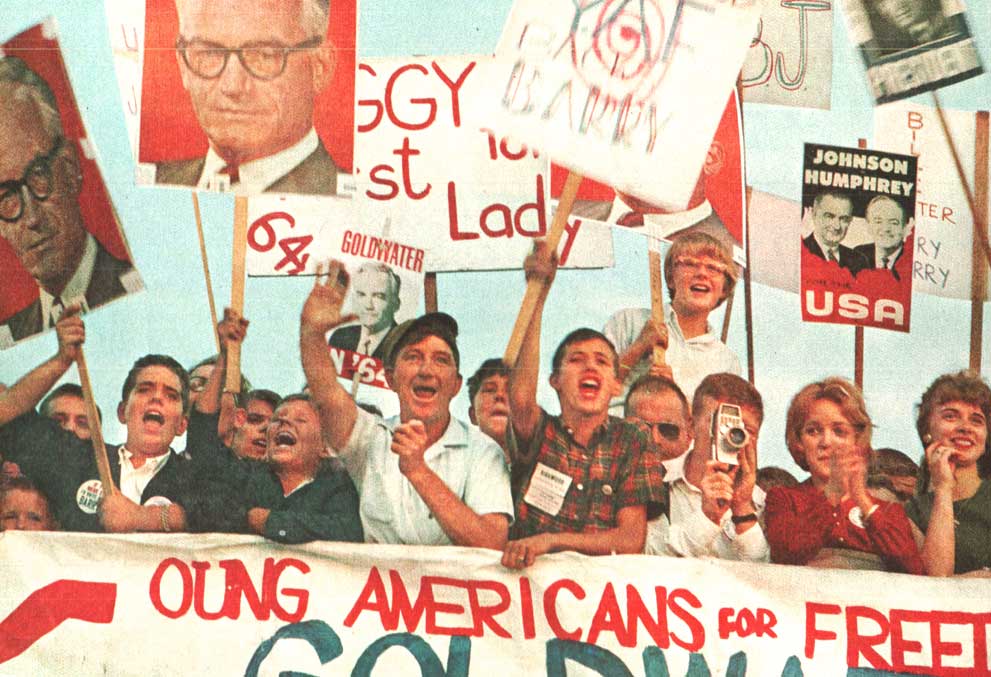 This day in May, 1964 was all about Primary fever and the race to the White House. On May 15th, voters were going to the polls in Primaries for Oregon to pick a candidate. The Democrats had only one candidate to choose from; LBJ. But the Republicans had 6 to choose from , and the GOP campaigning was fierce.  With Barry Goldwater, Henry Cabot Lodge, William Scranton, Nelson Rockefeller, Senator Margaret Chase Smith and former vp Richard Nixon all vying for the estimated 265,000 voters, a horse race atmosphere was prevalent  throughout Oregon, and it was that way all over much of the country, in primaries for this election year. With Ambassador Henry Cabot Lodge given the edge, the latest numbers showed Nelson Rockefeller was gaining in the popularity polls. It wouldn’t be over until it was over.

In other news via this newscast from ABC Radio and WXYZ-AM in Detroit,  Michigan politics was up and at it again with friction between Attorney General Frank Kelly and Governor George Romney over the issue of legislative reapportionment. Barbs between Kelly and Romney were on the increase with each side accusing the other of flagrant disregard for the Constitution.

Meanwhile, on the national level – things were heating up on Capitol Hill over the Bobby Baker affair. Senate Republicans vowed to keep alive the investigation of former Democratic aide Bobby Baker. The hot debate was climaxed by a party line vote which Democratic members voted down a GOP proposal for further Senate Rules Committee hearings.

And Vietnam was rearing its unsettling head. In South Vietnam, government forces were batting Communist guerrillas and got another setback as the government forces suffered large losses in a Vietcong ambush north of Saigon, with late reports claiming some 51 government soldiers killed and hundreds wounded. The news did not go without notice at the White House, as LBJ called in Defense Secretary Robert McNamara for talks on the situation.

And things were looking hopeful for landmark sales figures of 1964 model cars. People seemed to like the Ford Mustang.

And that’s how it went for this May 15th in 1964, as presented by ABC Radio News and WXYZ in Detroit.