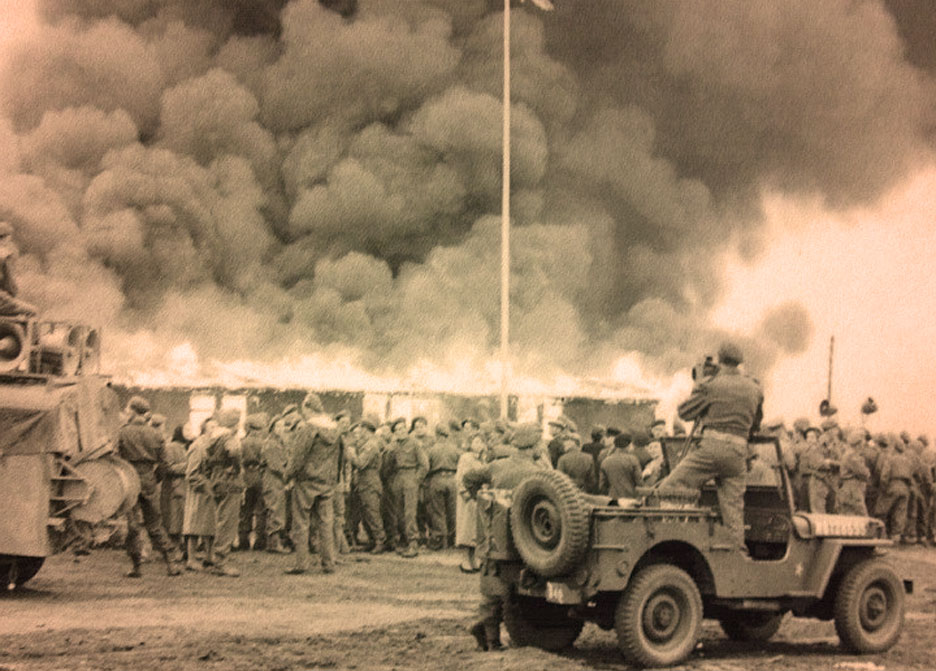 The Burning Of A Nightmare – Demolition Of Belsen Concentration Camp – May 21, 1945 – Past Daily Reference Room

As the War in Europe ended, the horrors and atrocities of that war were coming to the surface in grim and graphic detail. Some films taken, when the Allies first liberated the Concentration camps, which dotted Germany, were so horrendous that many of them weren’t shown to the American public for several years after. But radio, with its ability to put those graphic images into words, was making the discoveries known.

The BBC, who very early on had championed the use of on-the-spot recording, sent reporters to cover those events as they occurred. One of those events was the liberation and aftermath of the Nazi concentration camp at Bergen-Belsen, which had been taken over by British troops in mid-April.

The reports, which were used in a weekly program produced by the BBC World Service and sent to American radio stations, was broadcast on May 23, 1945 – two days after the Belsen Concentration camp was finally razed. The decision to burn the camp to the ground was made after it was realized Belsen was so badly overrun with Typhus and Tuberculosis that the only solution was to demolish it completely and build a relocation camp for the remaining survivors.

The recordings feature voices of the survivors, and in one case, an interview with one of the female Nazi guards.

It is a staggering document, and an important one. Further evidence that must never be forgotten.

In case you haven’t heard this one before (and I’m not sure if this has surfaced again in the last 69 years), here is that episode of London Column, as it was transmitted to the U.S. on May 23, 1945.