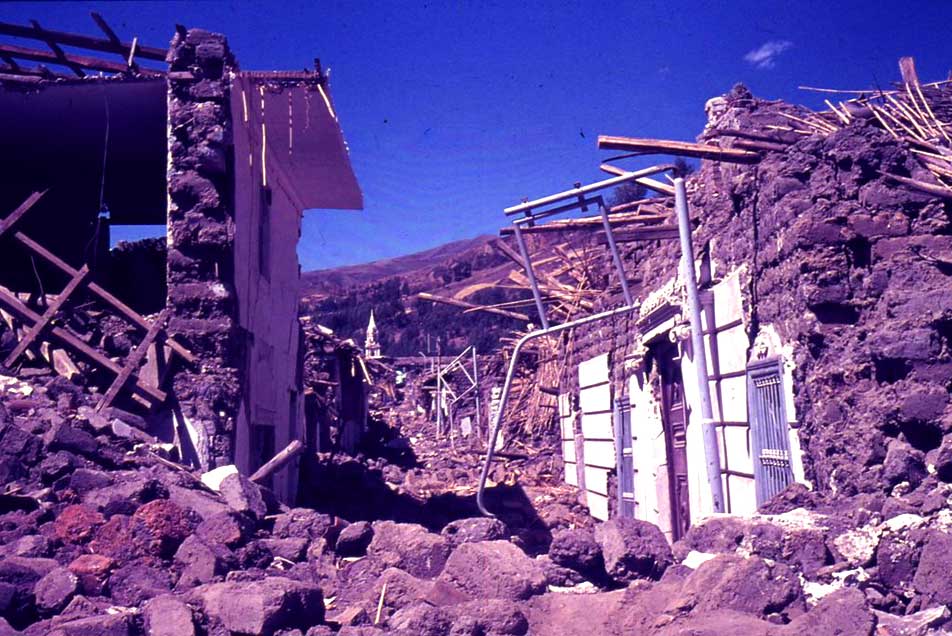 What wasn't leveled was washed away.

What wasn’t leveled was washed away.

With reports slow to come in, news regarding the massive earthquake hitting Peru two days earlier painted a grim picture,guaranteed to get grimmer as the days went on.

Initial reports said the earthquake struck half the country and caused widespread devastation. It was then reported the earthquake caused two dams surrounding a lake high in the Andes Mountains to collapse. The water rushing down the mountainside washed away two towns, each with a population of some 40,000. Government officials said the two towns simply disappeared.

Latest word from the Peruvian capitol reported cracks appearing in some of the highest mountains in Latin America, with fears of a catastrophic landslide at almost any time.

No word on numbers of dead – it was expected to reach well into the thousands. It was regarded as one of the worst earthquakes ever to hit the region, and if all the reports and predictions came true, the worst natural disaster the world has ever known. The earthquake was centered roughly 300 miles northeast of Lima, and at the time of this broadcast there was no contact with the hardest hit areas. Reports were coming regarding areas considered to be only the fringe of the earthquake area.

And while that was going on, there was other news.

President Nixon was sending a task force of Congressional members and White House staff to Southeast Asia to access what was going on with the status of the Military operations. Many felt it was a “show visit”, as the Congressional team, Governers and White House members was made up of members for the war and most had their minds made up before leaving, and as one Congressman pointed out, they would be carefully escorted only around places the White House wanted them to see.

Also on Capitol Hill – vote was coming up regarding the excursion into Cambodia, saying the U.S. should stay as long as there is one American prisoner being held there. Opponents of the bill said it would only prolong the war indefinitely and not save one single prisoner as a result. Ironically, it was speculated that President Nixon would announce some U.S. troop withdrawals from Cambodia in the next 24 hours.

Confusing times had by one and all.

And the Economy was reeling under the effects of the War. Testifying before the Senate Foreign Relations committee, IBM Chairman Thomas J. Watson said the war was the major factor in turning a healthy economy into an unhealthy one. And the longer the U.S. stayed in Vietnam the more chaotic the country will become. He went on to say the damage already done will take decades to repair and he felt we might soon reach the point where much of it was beyond repair. And AFofL-CIO Economist Nathaniel Goldfinger said the war was pushing the country into a deepening recession that could go even further. With the worst inflation in 20 years, the biggest rise in unemployment in 10 years and the highest interest rates in 100 years.

And a lot more, for this June 2nd in 1970 as reported over The NBC Nightly News.

And while you’re at it – as you know, we’re still knee-deep in our Past Daily Spring Fundraiser. Still a ways away from meeting our goal and rapidly running out of Spring. If you like listening to history, finding out about things you may have forgotten about, only heard about, or never knew about – Past Daily is right up your street. But it needs your support. It takes most hours of most days to get these posts preserved, digitized and ready for you to hear, study and download for yourself (yep – you can download everything on this site, if you haven’t done that already), and all we ask in return is chipping in a few bucks here and there to help us keep it going. It costs portions of pennies each day to be able to bring you all this history – all those sounds which may be new to you.

So – if you can do it – please consider popping in a few bucks to the donate button located just below. A little bit goes a long way and the good vibes it brings are endless. And tell your friends – we need love all over the place. We’ll be forever grateful.