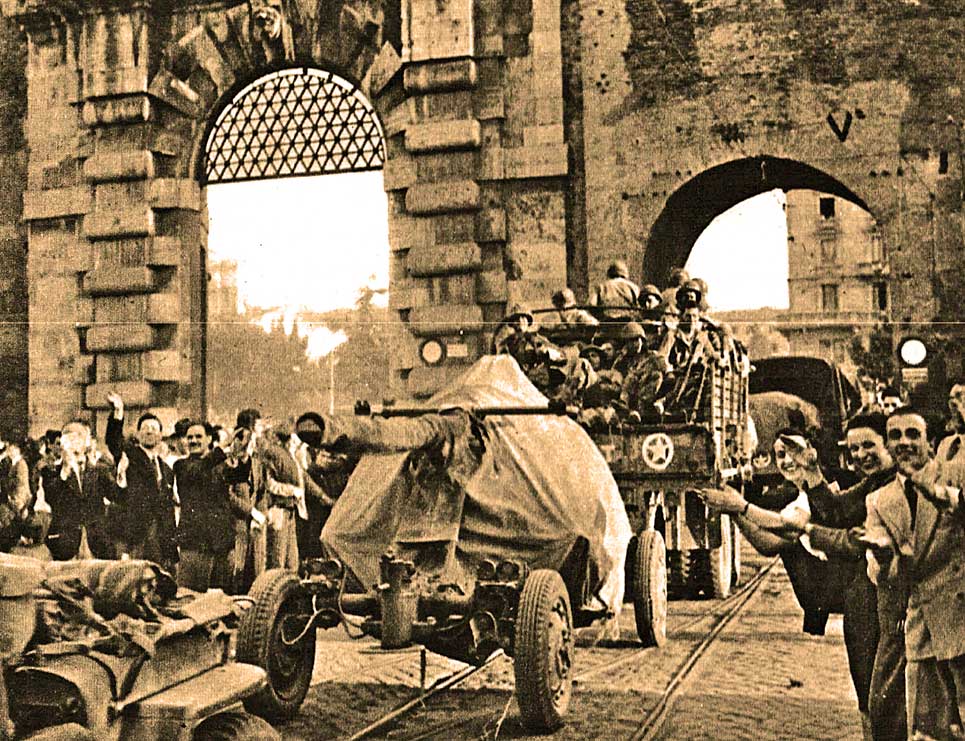 Seventy years ago today, before we were handed the momentous news of the Allied Invasion of France, we were given a glimpse of things to come by way of President Roosevelt’s announcement that Rome was now in the hands of the Allies.

Yesterday, on June fourth, 1944, Rome fell to American and Allied troops. The first of the Axis capitals is now in our hands. One up and two to go!

It is perhaps significant that the first of these capitals to fall should have the longest history of all of them. The story of Rome goes back to the time of the foundations of our civilization. We can still see there monuments of the time when Rome and the Romans controlled the whole of the then known world. That, too, is significant, for the United Nations are determined that in the future no one city and no one race will be able to control the whole of the world.

In addition to the monuments of the older times, we also see in Rome the great symbol of Christianity, which has reached into almost every part of the world. There are other shrines and other churches in many places, but the churches and shrines of Rome are visible symbols of the faith and determination of the early saints and martyrs that Christianity should live and become universal. And tonight (now) it will be a source of deep satisfaction that the freedom of the Pope and the (of) Vatican City is assured by the armies of the United Nations.

It is also significant that Rome has been liberated by the armed forces of many nations. The American and British armies — who bore the chief burdens of battle — found at their sides our own North American neighbors, the gallant Canadians. The fighting New Zealanders from the far South Pacific, the courageous French and the French Moroccans, the South Africans, the Poles and the East Indians — all of them fought with us on the bloody approaches to the city of Rome.

Only hours later, history would continue to unfold.

Here is that address; President Roosevelt’s 29th Fireside Chat, as broadcast on June 5, 1944.