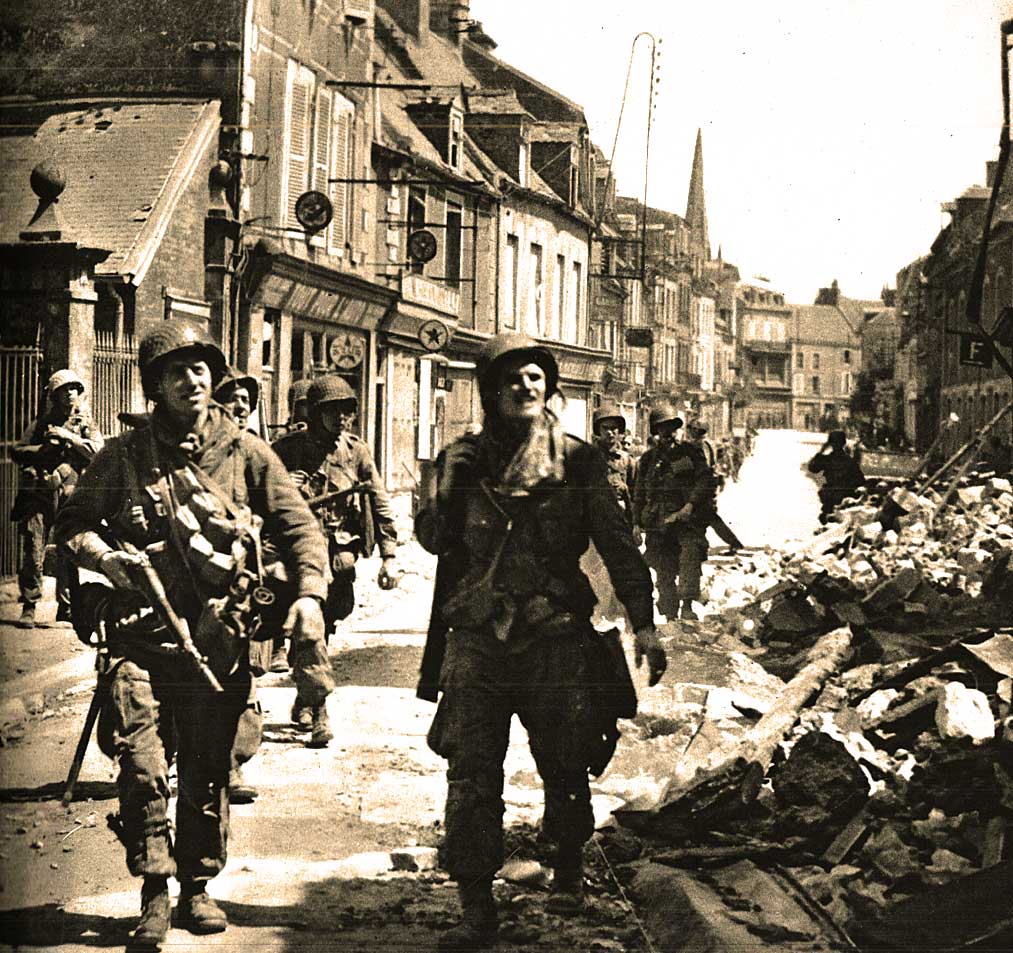 After the initial elation, the long road East.

After the initial elation, the long road East.

After the initial bulletins and breathless declarations our invasion of Europe was underway, the long slog east began. But for the next few days, news coverage was pretty much constant, until a solid footing was established on French soil.

For the time being, the landing of Normandy was a success even if all the initially planned objectives were not reached. To the west of the invasion beaches, the American sector was held by the 82nd and 101st Airborne divisions parachuted on the night of June 6th (these two divisions suffered a lot of casualties) and by the 4th Infantry Division having landed at Utah Beach at dawn (without encountering any major problems). The American parachute troops had a 15-kilometer bridgehead on the evening of June 7th. In Omaha Beach, the situation of the 1st and 29th American infantry divisions landed at dawn was more critical. Only a small part of the soil of France was under their control. The Commonwealth landings on the eastern flank (on Gold, Juno and Sword beaches) encountered difficulties but it was generally a great success. The paratroopers of the 6th Airborne Division seized the bridges over the Orne and made their junction with the troops disembarked at Sword Beach.

On the German side, the surprise was total. The storm which reigned the day before in the English Channel did not trouble the sentries on the coasts, nor the officers in their staffs. Allied air superiority prevented any movement and for the time being no Panzer division was fully engaged to push back the attackers to the sea. Hitler was not informed of the allied invasion until nine o’clock on the morning of June 6 : having gone to bed late, he fell asleep with sleeping pills and gave as instructions that no one wake him up. Meanwhile, Rommel was in Germany and celebrated the anniversary of his wife. The same day, he rode towards Normandy to take matters into his own hands.

The Germans launched their first counter-offensive towards Port-en-Bessin north of Bayeux, where US and British troops tried to join their bridgeheads. The 716th German Infantry Division and the 21st Panzer Division are designated to counter-attack.

Allied fighter aircraft flying over Normandy saw German armored movements and destroyed a large number of tanks and vehicles. They abandon the counter-attack and decide to move at night. The paratroopers of the 6th Airborne Division, located to the east of the landing beaches in the vicinity of the village of Ranville, cling to them and defend their positions with the newly disembarked anti-tank guns. Reinforced by the British 3rd Division, they rejected the advanced elements of the 21st Panzer Division, which retreated to the defensive line of Caen. In order to seize the latter, General Montgomery ordered the launch of operation Perch, which begins the same day.

Meanwhile, hundreds of American and British gliders landed in Normandy, often behind the lines of German forces, forcing the latter to retreat.

Here is a little-under two-hour extract from that second day of the assault on Fortress Europe, as presented by NBC Radio and the reports from the field, the BBC and other points where news was developing. Between the reports, regular programming made periodic appearances, with the venerable Big-Band holding sway while the news was being gathered.