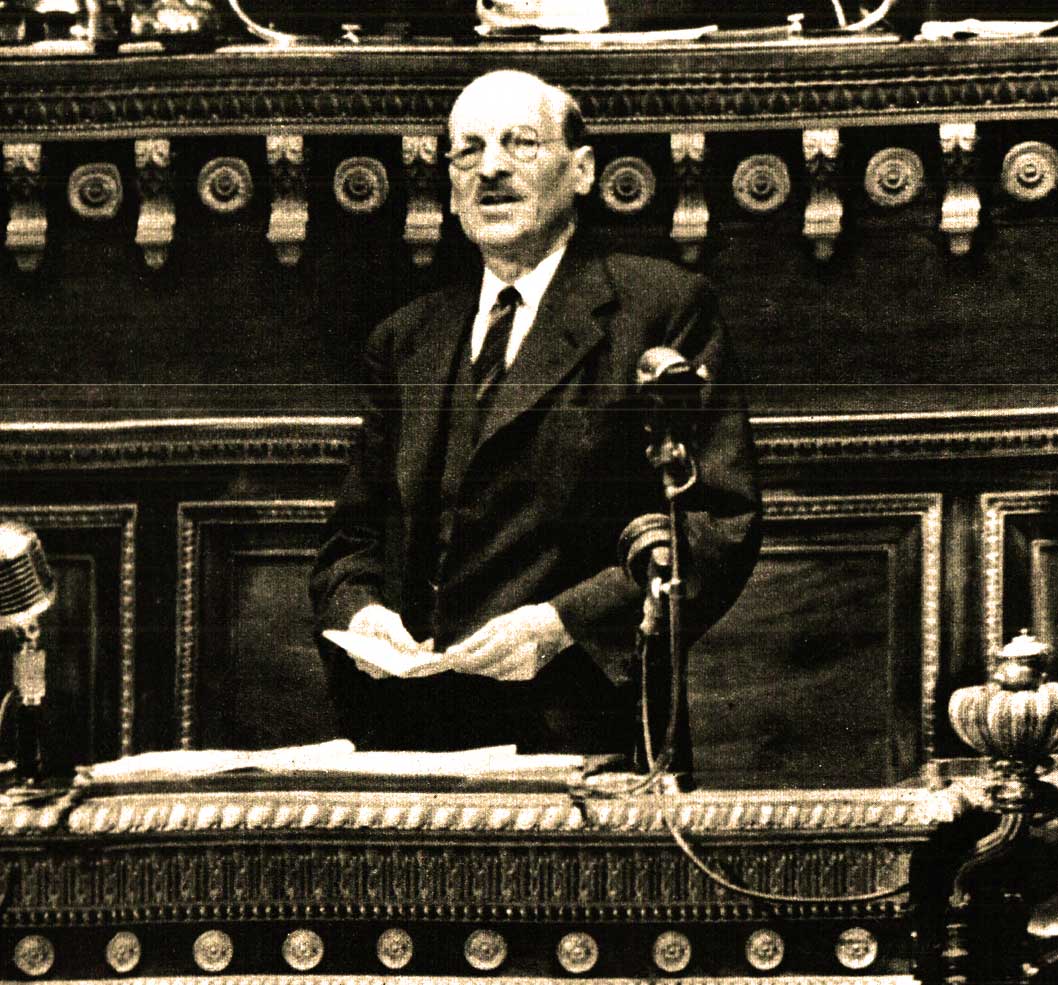 Prime Minister Clement Atlee - handed a Post-War Migraine with the promise of Aspirin.

The Pessimism From Downing Street – Clement Atlee On The Economic Crisis – August 10, 1947

With the end of World War 2 came the beginning of the economic and social crisis that gripped, not only the former Axis countries, but the victorious European Allied countries as well. The reconstruction of bombed-out cities, the re-tooling for peace, the incredible cost of waging war, not only in terms of money but in terms of people. The ocean of refugees, the masses of homeless left displaced from destroyed homes. The slow reconstruction of housing, the overcrowded shelters. The political crises that dominated all of Europe.

Even in 1947 – some two years after the war ended, the crisis only grew. With rationing, belt-tightening and the great economic hardship which befell England, an unease settled over the country. Strikes and protests – a political shift away from the government in power during the war to one, it was hoped, would offer some relief.

The relief wasn’t coming. The shortages, rationing and dire economic conditions were still prevalent. Britain was in worse shape in 1947 than it was in 1945.

And so Prime Minister Clement Atlee addressed the British people, and the world, on the situation as it stood as of August 10, 1947. He proposed further belt-tightening measures. Further reduction in armed forces, reduction in imported food and non-essentials and work on increasing domestic production for those things absolutely vital including food and raw materials. He offered no easy solution, nor was it a quick one. But if it was any consolation, most everyone was going through the same hardship.

Here is that address, as it was given by Prime Minister Atlee via the BBC Home and Overseas Service on August 10, 1947.

Just another of the many thousands of historic recordings offered at least twice a day from Past Daily. If you enjoy these recordings, and use them for your own reference or study, would you please make a donation to our Indiegogo Past Daily Fundraiser, currently going on? Every little bit helps, but we really need your help. So far we haven’t been able to reach anywhere near our goal and we’re still a good ways off before we can even say we’re within sight of it. Your Tax Deducible contribution will help preserve and digitize the thousands of historic recordings, the same ones you hear every day on Past Daily, and to help make all those recordings become available to everyone. But we can’t do it without your help or without your contributions – every bit helps. Please consider making your Tax Deductible Contribution today, so we can continue bringing you all the history you can handle – and tell your friends. You can help out by clicking on the headline below our Piano playing/singing Mascot and making your voice heard to help keep history alive.