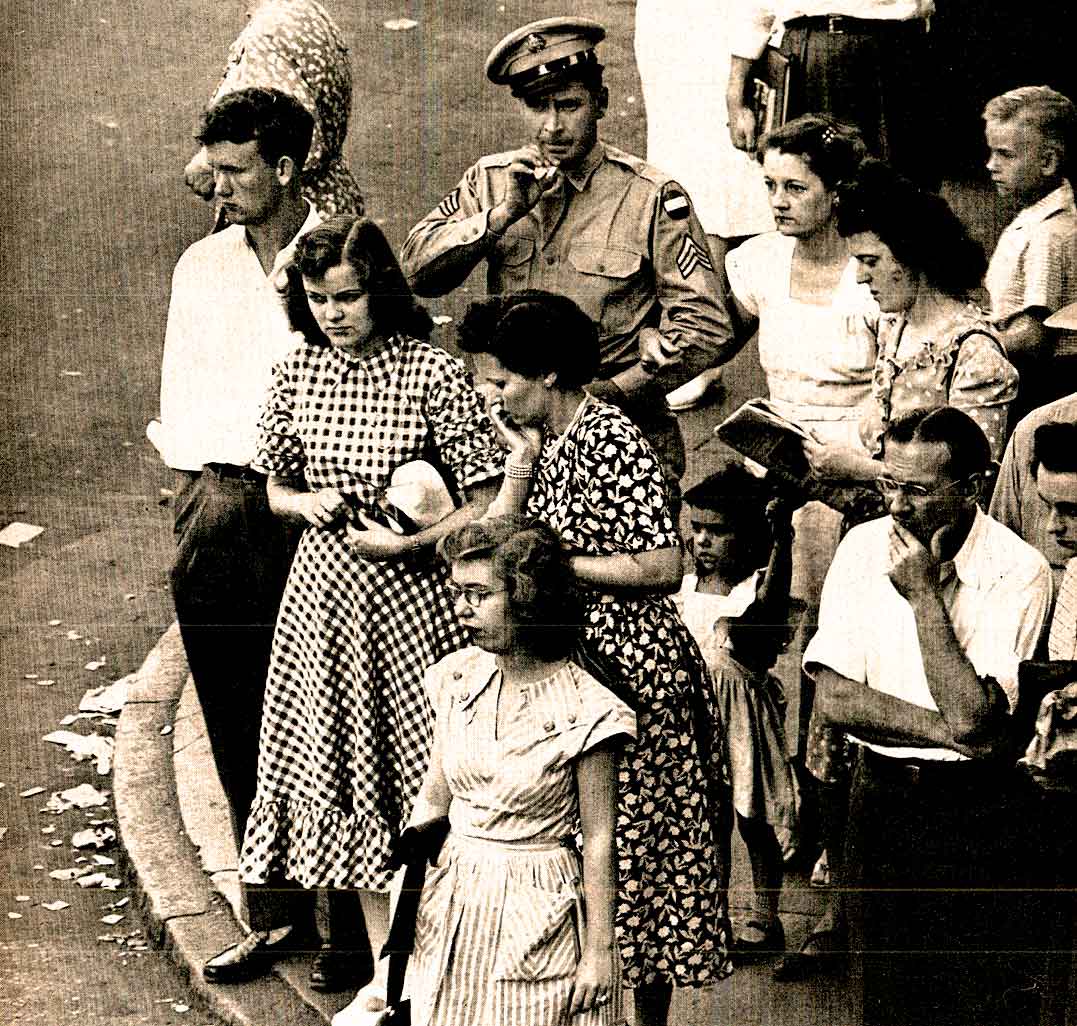 And sometimes Summer isn’t necessarily violent or simmering or even contentious.

This particular August 14th, 65 years ago was just that; a typical August day in 1949, with no earth-shattering upheavals or drama – just the day-to-day.

Well – there were the elections in Western Germany going on. And aside from the occasional reminder of pre-War days, with speeches having that characteristic Hitler ring, the elections were going off rather well and the candidates were, for the most part apathetic. But still significant, since these were the first elections to be had since the last time Germany went to the polls, in 1933.

Capitol Hill was up to is usual, with a Senate Subcommittee hearing on the B-36 Bomber program – and as usual there was a goodly amount of bickering back and forth as to its merits and detractions. But it wouldn’t be Capitol Hill without them. Next up were hearings regarding the Five Percenters

And so too, was the daily back and forth of Propaganda between Washington and Moscow. The Voice of America with its daily broadcasts to Iron Curtain countries, and Radio Moscow jamming those broadcasts and sending back their own. The War of Words, as always.

The situation between Communist China and Nationalist China, on a continuous boil and threatening to spill over into all of Southeast Asia at any time. But for now, just rattling sabers.

The crippling disease Polio was in the news – this time with reports of breakthroughs and success stories. Not yet a cure, but inching closer.

And since it was the middle of August, talk of heat waves made the news. The East Coast was sweltering with no break in sight.

But generally, it was an August 14th pretty unremarkable  in 1949 – a lot of names and places covered in this broadcast of Voices and Events. But mostly it was about Summer and too hot to really do anything.

For the time being anyway.

And sometimes history doesn’t mean all the insanity, violence or devastation. History can be about the day to day – the little things that form the backbone to the big events. That’s what Past Daily is all about – history in simple terms – the basic stuff. And it’s all important and it all needs to be preserved and restored and available to everyone to listen and study – even the seemingly unimportant moments. If you agree, we’re in the midst of our Indiegogo/Past Daily/Gordon Skene Sound Collection Fundraiser. We’re asking for pledges to help us keep the restoration and preservation going – to make some 200,000  hours of historic sounds, broadcasts, music and Culture available to you to listen to any time you want. We can’t do it alone – we need your help and your contribution, to chip in what you can to help make a difference. So please consider making that Tax Deductible Contribution in whatever amount you’re comfortable with. Just like the events of every day, it’s all important and it’s all necessary to understand the bigger picture. Please join our other friends who have given and are making a huge difference by clicking on the headline below our Piano Playing/Singing Mascot and make your pledge today. Is it a deal?