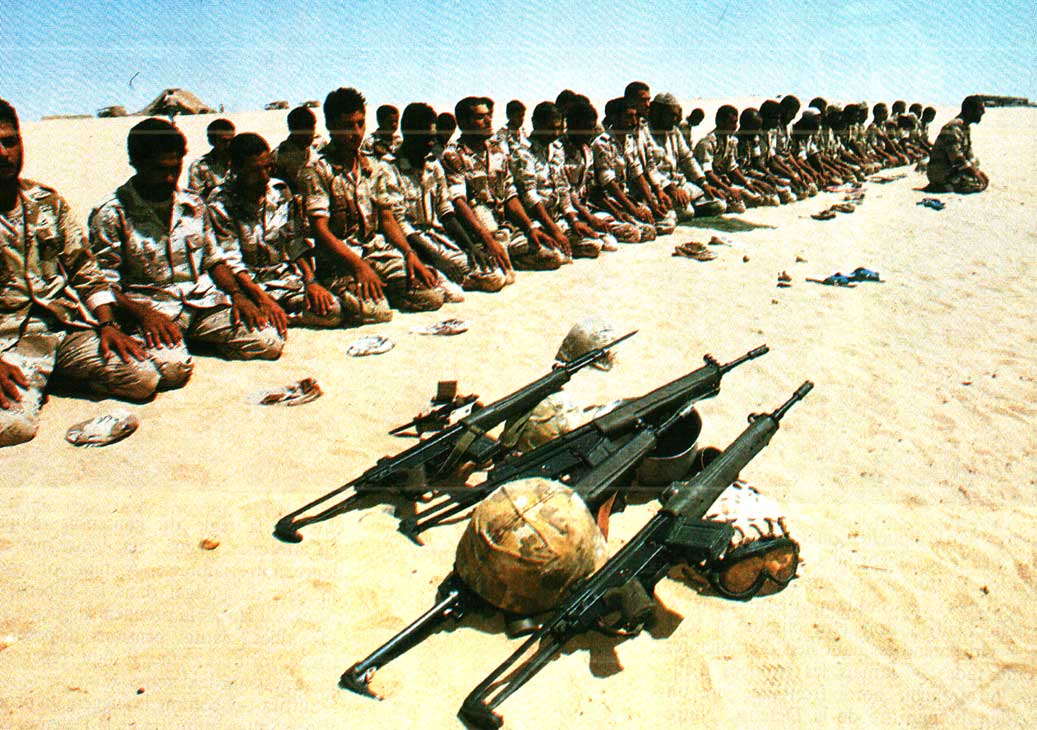 Looking at the bigger picture and suddenly the guys next door didn't look so bad.

Looking at the bigger picture and suddenly the guys next door didn’t look so bad.

With the Iraqi invasion of Kuwait still fresh on everybody’s mind, and the building reaction to it, a sudden turn in events occurred in the almost decade-long war with Iran; peace overtures. In fact, more overtures than a Verdi Opera.

Iraq‘s Saddam Hussein went on State Television and Radio to announce an agreement with virtually all of Iran‘s demands for a pullout of troops from disputed border areas and a prisoner swap in order to achieve a comprehensive settlement.

Why? Well . . .because all of a sudden it was looking like Iraq was going to need all the help it could get. Despite all the bluster to the contrary, an invasion by a “coalition of the willing” was a daunting prospect for Saddam Hussein. And a protracted war with Iran was a drain on resources, a drain on troops and a surefire game changer.

So the old adage “me and my brother against my cousin – me and my cousin against the stranger” seemed more apt than ever on this August 15th in 1990.

Meanwhile, Jordan’s King Hussein landed his own jet at Andrews Airforce Base near Washington and set off for the White House to attempt negotiations between the U.S. and Iraq over the Kuwait situation, which was spiraling out of control by the second. There were questions if, as mediator, King Hussein was bringing any peace proposals from Saddam Hussein to Washington for mulling over. Jordan was in a dicey position, since they were the only source of food supplies to Iraq and Washington was in a bargaining mood, many felt President Bush would offer to aid to Jordan to make up for the lost income Jordan would face by shutting the port of Aqaba as a supply point to Iraq. Easy to say – but entertaining various scenarios; one would include an Iraqi invasion of Jordan in reaction to the supply cutoff, which would be something of a trip-wire for Israel, who would immediately send troops to the Jordanian border, touching off another whole fracas.

No easy solution and a lot could go wrong in the meantime.

And terrorist threats were now popping up everywhere with Abu Abbas from the PLO faction in Iraq calling for terrorist attacks on American interests throughout the world and of U.S. troops now stationed in Saudi Arabia in particular.

And that was just a small fraction of what was going on in an otherwise fractured world, via The CBS World News Roundup for this August 15th, 1990.

Ending up our second week of Fundraising for the Indiegogo/Past Daily/Gordon Skene Sound Collection, things are looking better, but still precarious and we need your help now more than ever. Your Tax Deductible Contribution will go a long way in preserving this history, the voices, the events and the culture which you get to hear every day on Past Daily. It takes a lot of time and effort to pull all these posts together for your studying and entertainment – but that’s what we do because we think it’s important you know what history is all about and how often it’s repeated. If that appeals to you, then I would urge you to consider contributing what you can, what you’re able, to keep the preservation and restoration of history alive and well. So, please click on the headline just below our Piano Playing/Singing Mascot and make your pledge today.