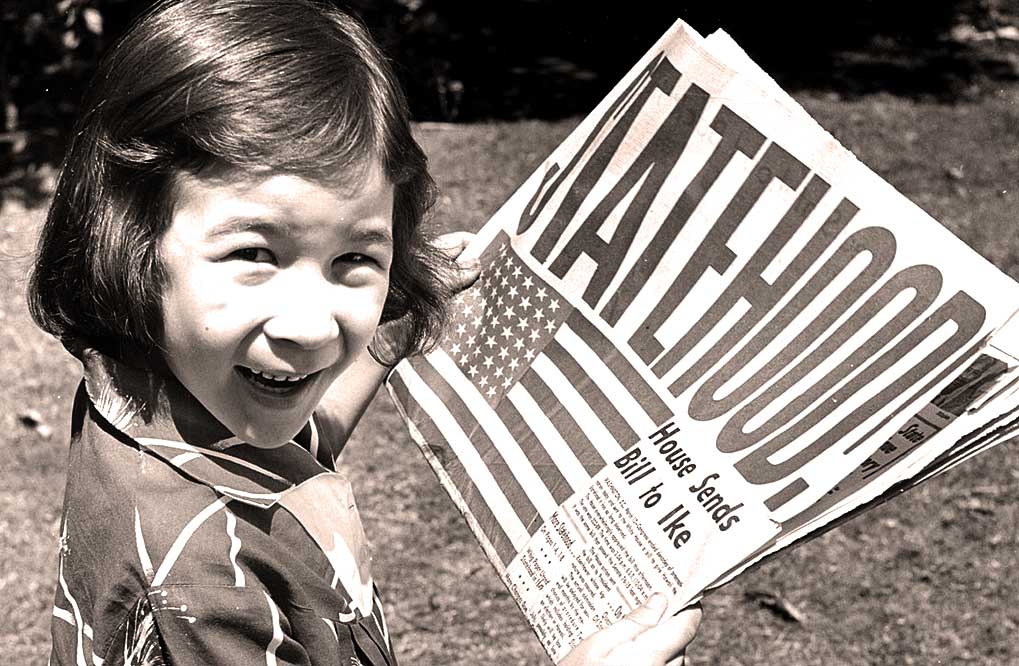 Hawaii: Making it all official.

After years of lobbying and decades of waiting, President Eisenhower finally made it official – Hawaii became the 50th state of the Union. The signing ceremony was brief, but the celebration quickly spread all over. We now had another star on the flag and another state in the Union. And everybody liked it.

Prior to 1959, Hawaii was an organized incorporated territory of the United States. The territory was established in 1900 by the Hawaiian Organic Act. In 1946, the United Nations listed Hawaii as a non-self-governing territory under the administration of the United States (Resolution 55(I) of 1946-12-14). Also listed as non-self-governing territories under the jurisdiction of the United States were Alaska Territory, American Samoa, Guam, the Panama Canal Zone, Puerto Rico, and the Virgin Islands.
The first known settlers of the Hawaiian Islands were Polynesian voyagers who arrived sometime in the eighth century. In the early 18th century, American traders came to Hawaii to exploit the islands’ sandalwood, which was much valued in China at the time. In the 1830s, the sugar industry was introduced to Hawaii and by the mid 19th century had become well established. American missionaries and planters brought about great changes in Hawaiian political, cultural, economic, and religious life. In 1840, a constitutional monarchy was established, stripping the Hawaiian monarch of much of his authority.

In 1893, a group of American expatriates and sugar planters supported by a division of U.S. Marines deposed Queen Liliuokalani, the last reigning monarch of Hawaii. One year later, the Republic was established as a U.S. protectorate with Hawaiian-born Sanford B. Dole as president. Many in Congress opposed the formal annexation of Hawaii, and it was not until 1898, following the use of the naval base at Pearl Harbor during the Spanish-American War, that Hawaii’s strategic importance became evident and formal annexation was approved. Two years later, it was organized into a formal U.S. territory. During World War II, Hawaii became firmly ensconced in the American national identity following the surprise Japanese attack on Pearl Harbor in December 1941.

Here is that special report, as it happened on this day in 1959 via NBC Radio.