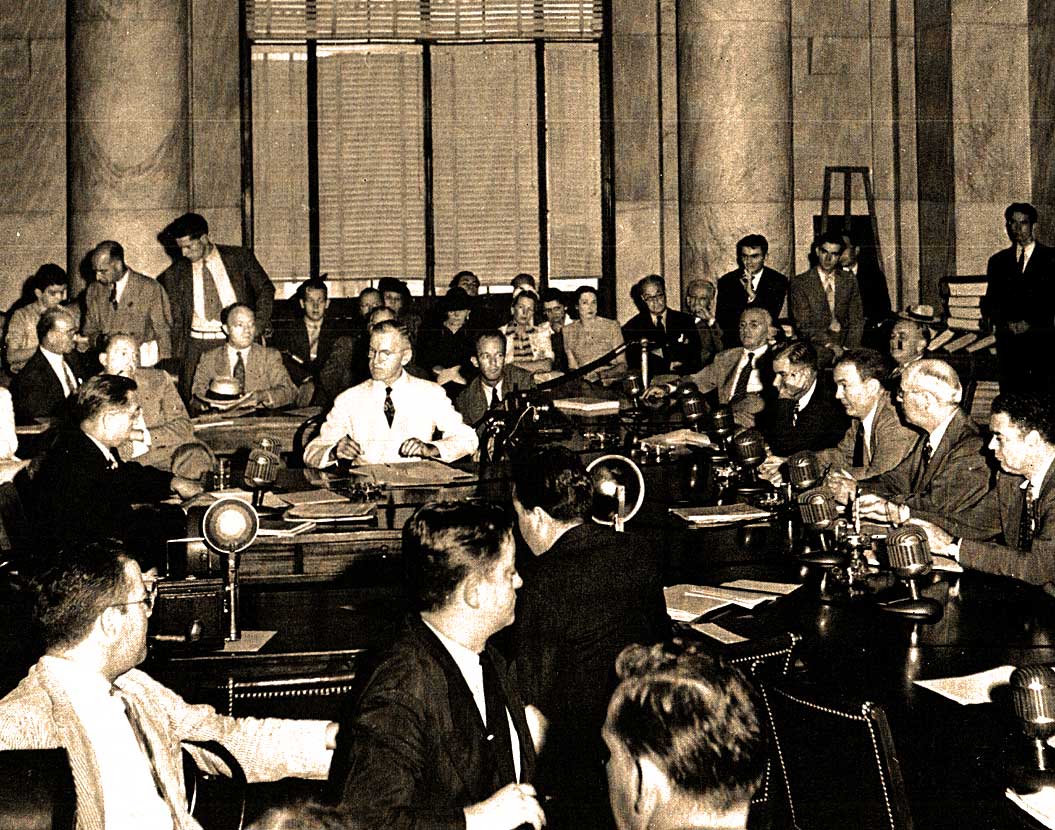 The Circus was in town.

The Circus was in town.

On this September 10th in 1941, beyond the news of the War in Europe – the sinking of the U.S. Freighter Steel Seafarer in the Suez Canal, the claims and counter claims of air raids over Germany and Britain, the progress along the Eastern Front and the successes of General Timoshenko, the news was about the happenings on Capitol Hill.

According to many that the “circus was in town”, the Senate held hearings over what was believed by several Isolationist Senators to be an onslaught of Propaganda coming from Hollywood in an effort to drive the U.S. into the war. Dubbed The Warmonger Hearings, Senators roasted and grilled one another over allegations that Hollywood, on the advise/pressure of Washington, was doing its level best to create a war atmosphere and goad the American people into joining the fight. The hearings brought a number of fiery exchanges and howls from the gallery – along with accusations that Hollywood was a hotbed of exiles, bent on getting the U.S. actively engaged in the war and spreading pro-war propaganda in the movies, and that movie houses all over the country had been forced into running these films because of the studio monopoly on Theaters.

And while Capitol Hill was in an uproar, the matter of the gasoline shortage was quietly being addressed by the oil interests and the urging of construction of a proposed 1800 mile pipeline from Texas to New York. Some on Capitol Hill protested, saying the construction of such a pipeline would take away much needed steel for shipbuilding. A report was being prepared and about to be presented to the Senate. One possible solution was the raising of gas prices in order to curtail usage. Only time would tell on that one.

In the meanwhile, President Roosevelt was readying an address on the current state of Foreign Affairs, to be given the following evening.

And that’s just a sample of what went on this September 10th in 1941, as presented by The Blue Network of NBC Radio.

In case you’ve forgotten (and we certainly haven’t) – Past Daily is in the middle of a Fundraiser. We’ve teamed up with Indiegogo, and along with the Archive which supplies us with all this historic audio, The Gordon Skene Sound Collection, we’re passing the hat and begging for your TAX DEDUCTIBLE contributions to help us continue to preserve, restore and share this history with you. Because we’re now a Non-Profit, we’re able to give you a tax write-off, which will come in very handy on December 31st. I know that’s a ways off, but you can never be too early to get the jump on a write-off. So please, take a moment and make your contribution by clicking on the headline right below our Piano Playing Mascot (down there) and making your voice heard and help us keep doing what we do best – bringing you history every day.