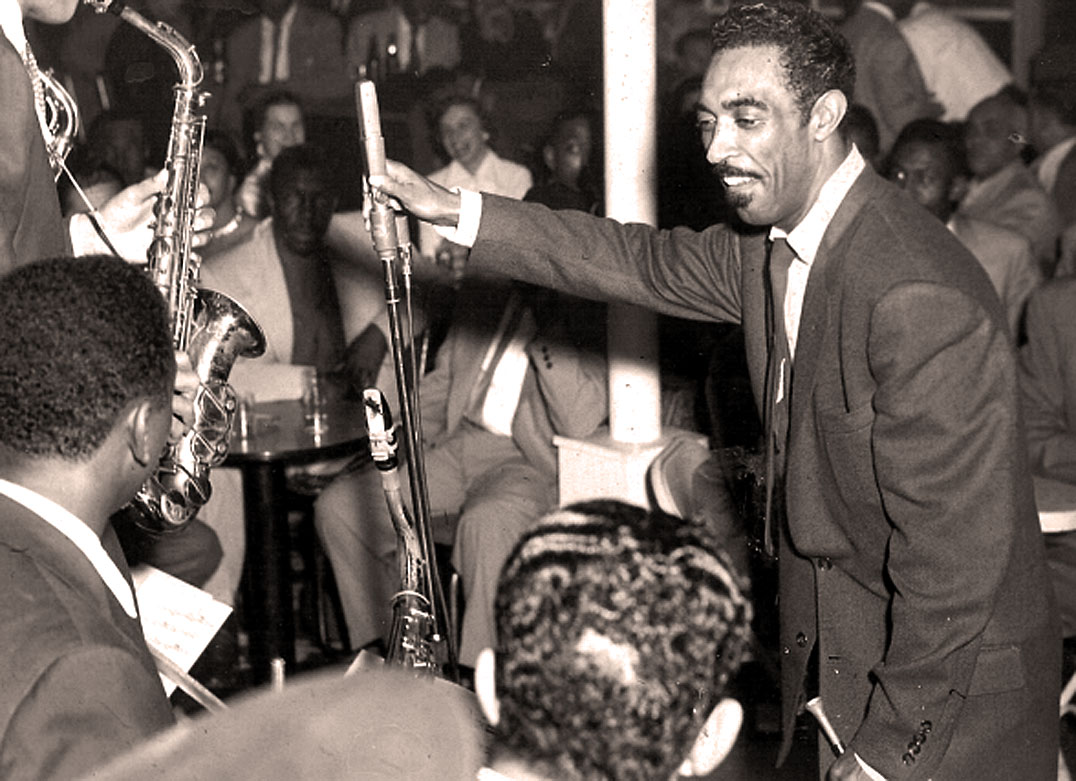 Gerald Wilson - leading an orchestra of giants in 1950.

Gerald Wilson – leading his orchestra in 1950. A Lion Tamer would be envious.

Click on the link here for Audio Player – Gerald Wilson and His Orchestra – Live at Veteran’s Memorial, San Francisco – 1950

As tribute to one of the most dynamic and original forces in Jazz from the mid-century on, I ran across this never-before-released live concert by Gerald Wilson and his orchestra, during a critical but not well-documented period of Wilson’s career.

This concert, recorded in experimental stereo in early 1950 at the Veterans Memorial in San Francisco features Gerald Wilson leading a band of what could only be described as giants of their day; such luminaries as Ernie Royal, Melba Liston, Sonny Criss, Gerald Wiggins, Red Callender, Wardell Gray, Zoot Sims and Stan Getz.

Because it’s experimental stereo, and 1950, this otherwise stellar recording has a few flaws and bumps here and there – announcements by Wilson are hard to hear because the band is miked but not the announcer. But it doesn’t detract from what is essential listening and a glimpse into the workings of a band and their leader who are in the midst of something big. What’s more interesting is that Gerald Wilson didn’t record under his own name between 1947-1961, when the legendary Pacific Jazz period started. And Wilson’s last band was in 1947 when he was recording for a few small labels in the Los Angeles area.

I can’t think of a better tribute to the lasting memory of a great artist than to present him during a rare and vibrant period and in a charged and exciting setting.

Wrap yourself around this one and celebrate an incredible life in music.

I’m going to keep this short – we need your help. We need it now – we need whatever you can contribute. Remember, it’s TAX DEDUCTIBLE. Click on the headline below the photo of our Piano Playing mascot and PLEDGE YOUR SUPPORT!