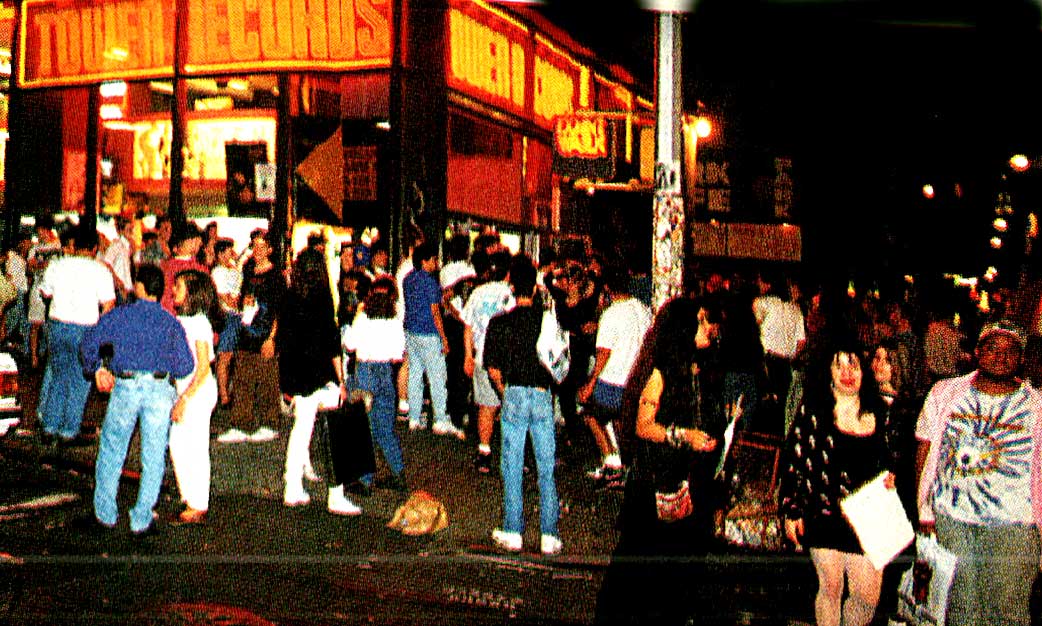 And while tensions in the Middle-East were easing somewhat, via more shuttle Diplomacy from Secretary of State James Baker and meetings with Israel’s Itzhak Shamir – a tenuous ceasefire began in Croatia – Federal Reserve reps meeting in Moscow with Gorbachev and Yeltsin to discuss Russia’s finances – and CIA Chief hopeful Robert Gates was offering a stream of mea culpa’s in the wake of his confirmation hearings – hundreds of record stores all over the U.S. and overseas were holding their collective breaths in anticipation of a flood of buyers, ready to toss cash and credit cards for the opportunity of being the first kids on the block to get the new Guns n’ Roses’ Use Your Illusion I and II, which was available beginning at midnight.

News for this September 17th in 1991 was something of a mixed bag. The forever on-and-off/pledged,signed,sealed and broken treaties, talks and summits continued in the Middle East, with Secretary of State James Baker flying back and forth between Washington, Cairo and Jerusaelm in the hopes of landing some sort of peace settlement, yet again. Baker and Israeli Prime Minister Itzhak Shamir met to resolve a flap that had developed over President Bush’s desired 120 day delay over $10 billion in loan guarantees. Shamir wanted assurances the loans would be forthcoming – and even though there were smiles and handshakes, nothing concrete emerged as was later disclosed by Baker when he landed in Cairo. The flap was generated by the controversy over building on land in the settlement territories. And on and on it went.

Civil Rights Activist Al Sharpton arrived in Israel to serve legal papers to a Hassidic Jewish man whose car struck and killed a black youth in the Crown Heights section of Brooklyn, touching off riots in August. The action was denounced by the Hassidic community.

Ceasefires were being brokered in the former Yugoslavian republics of Serbia and Croatia, but this was one of several brokered in the past few weeks, so hopes were not high.

Treasury Secretary Nicholas Brady and Fed Chairman Alan Greenspan arrived in Moscow to discuss the economic situation in Russia with Mikhail Gorbachev and Boris Yeltsin – according to Brady and Greenspan, they were coming to Moscow with know-how, not blank checks.

CIA Chief-designate Robert Gates was on Capitol Hill to over a file cabinet full of mea culpas over his role in the Iran-Contra scandal. It was one of those “had I known then what I know now” type confessionals to go along with his confirmation hearings.

And thousands of fans lined up at record stores all over the world in anticipation of the release of Guns n’ Roses latest two album set Use Your Illusion I and II. The album was slated to go on sale at midnight and the amount of sheer hype hadn’t been seen since the early days of The Beatles. The 90s were upon us.

And that’s just a small slice of what went on this September 17th in 1991, as reported by The CBS World News Roundup.

Come on everybody . . .I know you’re out there. We’re ONLY A FEW DAYS AWAY FROM THE END OF OUR FUNDRAISER WE HAVEN’T HEARD FROM YOU YET! WE’RE begging – we’re PLEADING! We DESPERATELY need your TAX DEDUCTIBLE CONTRIBUTION in order to keep Past Daily running and to keep our on-going campaign of preserving, restoring and sharing thousands of hours of history with you. We have to make our operating costs and we have to pay our bills and we’re a ways off from hitting our goal (not the $85,000 as it says on the Indiegogo page), but we need what ever you can chip in to help us keep going. PLEASE-PLEASE-PLEASE MAKE YOUR CONTRIBUTIONS TODAY BEFORE OUR FUNDRAISER IS OVER IN A FEW DAYS! Please click on the headlinE just below our Piano Playing Mascot and MAKE YOUR CONTRIBUTION TODAY. IT’S TAX DEDUCTIBLE AND IT IS DESPERATELY NEEDED.