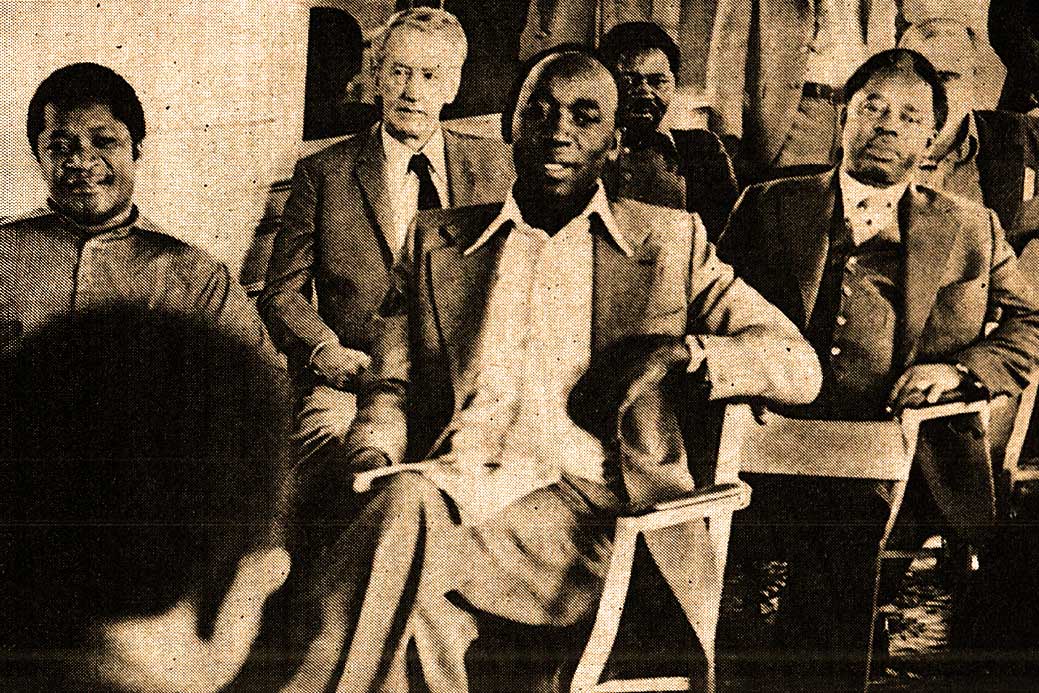 Meeting in London to discuss how Zimbabwe/Rhodesia was going to pan out.

Meeting in London to discuss how Zimbabwe/Rhodesia was going to pan out.

Africa was a hotbed of change, this September 25th in 1979. With the overthrow of the Central African Emperor Bokassa, who likened himself to Napoleon and ordered massacres of countless people including school children and the delicate transition of the former White-Minority government of Rhodesia to a Black Majority government of Zimbabwe was underway in London.

Starting off the news of this day with reports of the kidnapping of two American businessmen in El Salvador. No terrorist group was claiming responsibility of abducting the two, which resulted in a shootout, leaving one Salvadoran bodyguard dead.

Over to The Central African Republic where news of the overthrow of Emperor Bokassa by his cousin the previous night forced the deposed leader to seek exile in France – who weren’t particularly interested in taking him, even though he claimed to have dual nationality as well as having his wife and son living in Paris. As of this day, his private jet was parked on a tarmac at a French military base, 60 miles outside of Paris while the diplomatic wrangling went on.

In London, progress was being made in talks over the future of Zimbabwe Rhodesia. Agreement by the government of Prime Minister Bishop Abel Muzorewa to a draft constitution that would strip whites of their veto power. Whites reacted with caution, more concerned whether or not the Patriotic Front Guerrillas would agree to the terms, but were optimistic if it meant an end to the 7-year old Civil War.

And former President Nixon was returning to the U.S. after another visit to China, where he was said to have found relations between the two countries progressing faster than he could have imagined during his days in office when he first visited China in 1972.

All that, and news on Cambodia via the United Nations, for this September 25th 1979 as reported on The CBS World News Roundup.

LESS THAN 48 HOURS TO GO BEFORE WE GIVE UP THE GHOST. 48 HOURS BEFORE OUR INDIEGOGO/PAST DAILY/GORDON SKENE SOUND COLLECTION FUNDRAISER TO RESTORE, PRESERVE AND SHARE HISTORY IS OVER. Your support and TAX DEDUCTIBLE CONTRIBUTIONS ARE NEEDED NOW MORE THAN EVER. Please give what you can – it doesn’t matter. It all goes to a great cause – preserving History and sharing it with everyone. Please click on the headline right below our Piano Playing Mascot and make your CONTRIBUTION TODAY BEFORE ITS ALL OVER. WE NEED YOUR HELP AND WE NEED YOUR SUPPORT!