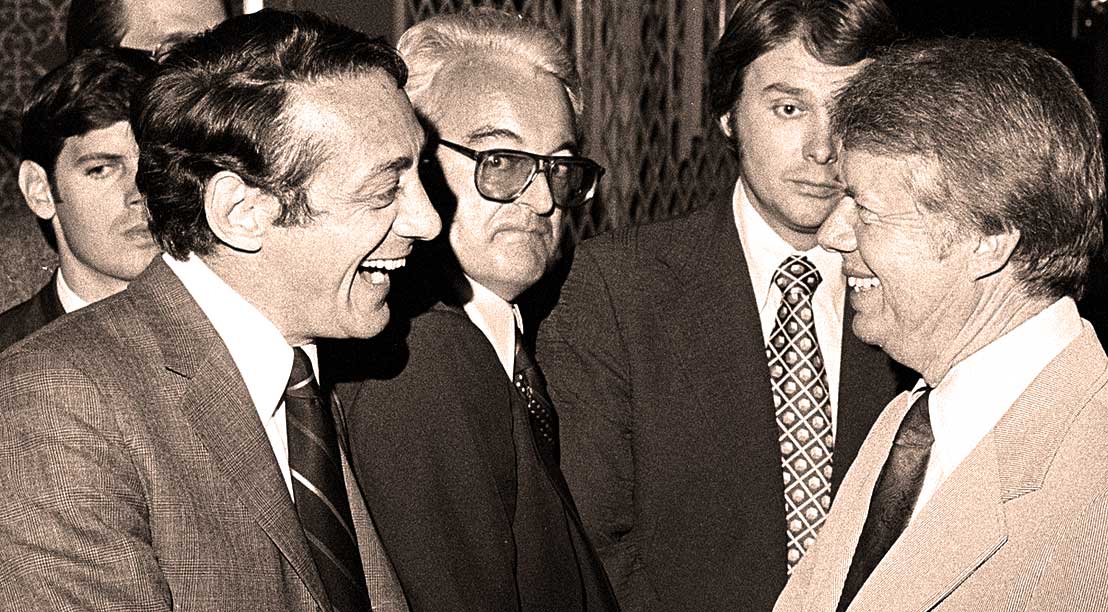 Jimmy Carter meets Harvey Milk - the onlookers had a different story, no doubt.

Jimmy Carter meets Harvey Milk – the onlookers had a different story, no doubt.

Hard to say “business as usual” this first week in October, 1976. The Presidential Campaign was officially a month-old and despite widespread yawns from both sides of the political aisle, polls showed the Carter-Ford race was a dead-heat.

But then, President Ford had some baggage to deal with – being an appointed vice-President and later a de facto President didn’t set well with many people. The specter of Richard Nixon loomed large and memories of Watergate still burned brightly in the collective electorate. Not to mention the fact that President Ford was going on a veto binge with the 94th Congress and the economy was on shaky ground as the House was heading to adjournment. Fresh on everyone’s mind was the veto of a $56 billion Appropriations bill for Social Services; education, employment, health and welfare, and it became President Ford’s 59th veto. The next day, the House and the Senate overrode Mr. Ford’s veto – the 12th time Congress was able to do so. After that, Congress was free to go home and campaign and wait to see what November was going to bring. It was revealed when President Ford was a member of Congress he played golf with a number of influential business figures, which some indicated swayed his position on various economic issues. Certainly nothing unusual as far as Capitol Hill went, but it was an election year . . . . .and there was that matter with Earl Butz to ponder. Seems the Agriculture Secretary received a severe reprimand from President Ford over his inflammatory racist comments Butz was reported to have made earlier in the year. A groundswell of calls from members of Congress for Butz’ resignation was growing.

Meanwhile, the world was quietly spinning out of control. The United Nations was the scene of a duel of words between Henry Kissinger and Andrei Gromyko over the subject of Southern Africa – specifically Rhodesia and the war against rebels along the Mozambique border which was engaging in stepped up activity. Kissinger offered a peace plan which was poo-pooed by the Soviets and agreed on by most everyone else that the plan was weak – but it was better than nothing, for the time being.

Troubles in Lebanon were continuing as Christian militia, backed by Syria, mounted an attack against Palestinian guerrillas in the mountains east of Beirut. One town had been re-taken so far and others were expected to fall in line.

And Saudi Arabia was back-peddling over a statement attributed to Foreign Minister Faisal threatening an oil embargo of the U.S. if Congress passed legislation aimed at the Arab boycott of Israel. Spokespeople were quick to fall over themselves, saying Faisal said no such thing and didn’t even imply it.

And that’s just a little of what went on this week ending October 3rd in 1976 as presented by ABC Radio’s World News This Week.