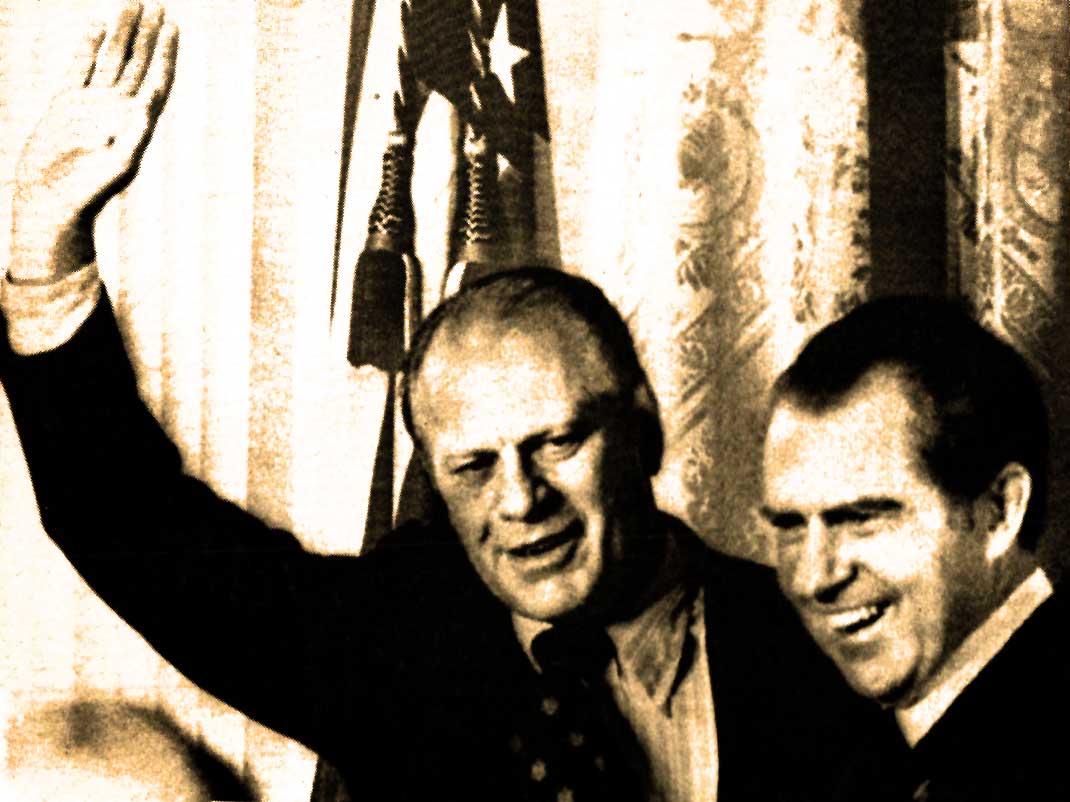 Hoping the get the heat off for a while.

Hoping the get the heat off for a while.

Following the surprise announcement of President Nixon’s choice of Gerald Ford as his Number 2, all of Washington was going into overdrive with speculation on what such a move meant.

Many on Capitol Hill hoped it would be the start of the healing process. That one scandal came to a conclusion (with vice-President Spiro Agnew handing in his resignation) and another was bubbling to the surface. Nixon was hoping the move would buy time, that the Agnew affair and the crisis in the Middle East would provide enough distraction to help America forget about Watergate. It was hoped Agnew’s resignation and Ford’s appointment would restore confidence and bring the nation together again. Although it wasn’t exactly clear how forgetting about Watergate and concentrating on Gerald Ford would accomplish that, the idea that Ford was a safe choice and a well-respected member of Congress on both sides of the aisle most likely helped. But still, the wagons were circling and Nixon was grasping at straws. The selection of Ford helped ease the prospect of a problem with the Senate’s venture into the unexplored territory of ratifying the vice-Presidential choice. The confirmation of Ford as VP was anticipated to be a breeze, and the agreement to televise the hearings was expected to be helpful in letting the rest of the country get to know who Gerald Ford was. Although, it was also universally felt the confirmation hearings would be dull as dishwater.

All this didn’t detract from the business of Watergate though. The level of trust towards Nixon was flimsy at best, with many calling into question his criteria for choosing associates. A Federal Rules Court appealing that the President was not above the law and could not withhold pertinent sections of those tape recorded conversations from the Grand Jury. By the end of the week President Nixon was facing the decision of whether to appeal to the Supreme Court.

And there was the matter of the War in the Middle East (Yom Kippur War) weighing on everyones mind. It was shaping up not to be the lighting quick war of 1967, but one which was taking a heavy toll on both sides. The Russians were airlifting supplies to Egypt and Syria and were encouraging other Arab nations to join in the fighting. The U.S. was making good on its move to supply Israel with replacement armaments. Despite all the saber rattle between East and West, it was hoped this episode wouldn’t threaten detente. But the real threat came in the form of an Arab move to cut off the flow of Middle-Eastern oil. That led President Nixon to another call for approval his energy program. But even without the threat, the U.S. was facing the shortage of heating oil during the coming Winter, and that was enough to bring the proclamation of Allocation Controls to begin November 1st.

All in all, a very complicated and murky week, the one which ended on October 13th in 1973 as reported by CBS Radio‘s Washington Week.