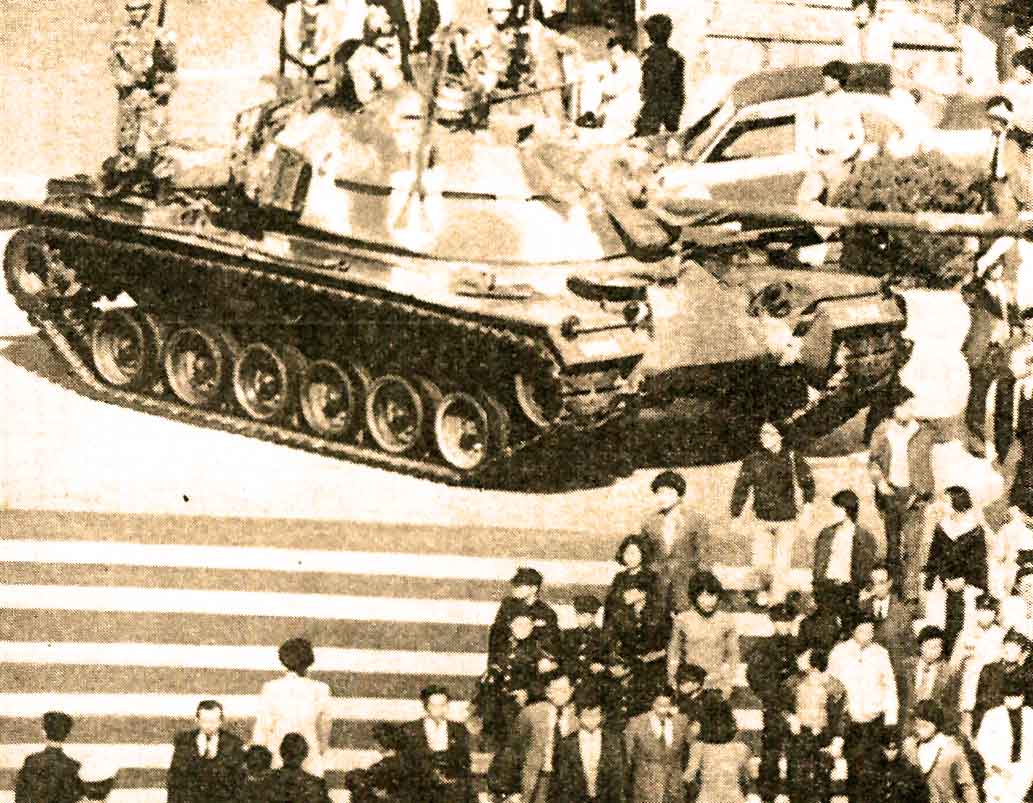 'Mine's bigger than yours'. Cracking down on protests in Seoul.

‘Mine’s bigger than yours’. Cracking down on protests in Seoul.

A day full of changes and crackdowns, this October 22nd in 1979.

Starting off the news of the abrupt resignation and departure of Israeli Foreign Minister Moshe Dayan over issues dealing with the West Bank, illegal settlements and what was perceived as an unpopular Begin government. Further complications came when the Israeli Supreme Court ordered the removal of the settlement of Elon Moreh, argued that the land the settlement was on was taken illegally from the Palestinian land owners.

In Korea – rioting and protests prompted a state of Martial Law all around South Korea as the government of Park Chung Hee issued crackdown orders, saying the ban on public gathering would be lifted “perhaps in a few weeks”. Members of the government wanted the tanks and troops to leave sooner, as they were concerned this latest sign of oppressive tactics wasn’t doing South Korea’s reputation any good with the rest of the world. The crackdown was the result of protests by students over the expulsion from Parliament of a top opposition leader, Kim Yung Sam who had criticized the government in an interview with The New York Times.

In Czechoslovakia – the government there was cracking down on dissidents by rounding up key figures they considered to be causing the all the trouble. Among them were playwright Vaclav Havel who, if convicted, would serve a long prison term.

Closer to home – Senator Ted Kennedy was expected to announce the formation of a committee to explore his Presidential Campaign prospects later on this week to be followed, it was assumed, by an announcement of his intention to enter the Presidential race. It was no secret Kennedy had been considering a run for the White House in 1980. Carter was expected to announce his decision to seek re-election shortly. The carps and potshots were already starting.

There was also the little matter of mixed message interpretations between President Carter and his chief Economic advisers. Seems Charles Schultze and Paul Volker mentioned something about Americans having to accept a declining Standard of Living for a time. Carter took it as a declining Quality of Life (lowering thermostats and driving smaller cars) where Schultze and Volker were talking about declining buying power. Tomatoes/Tomahtoes.

On the Union front – Auto workers at Ford were expected to follow their brethren at GM and approved and accepted a new three-year contract. Crisis averted. The situation over at Chrysler was shaping up to being a different story.

Not averted was the execution of convicted killer Jesse Bishop, which took place on schedule at Nevada State Prison. Bishop was convicted of a murder committed in 1977, but also confessed to the murders of 18 others, giving a list of names, dates and places during an interview with a Judge in August. It was now up to the court to figure out if what he was confessing to was true.

And that’s just a sample of what went on during this October 22nd in 1979, as reported by the CBS World News Roundup.