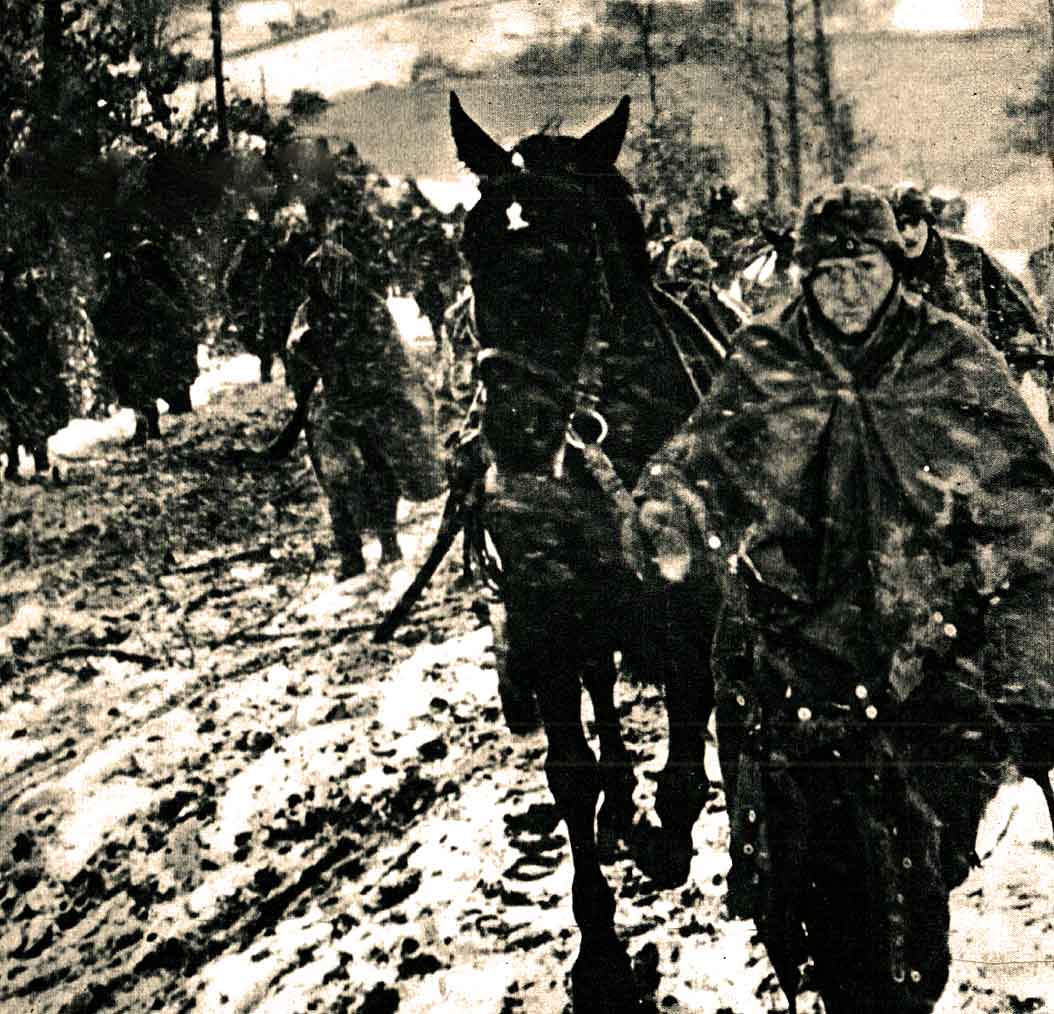 And there was always the famous Russian Winter to look forward to.

And there was always the infamous Russian Winter to look forward to.

News for this day in 1941 was enveloped in agitation and rejected diplomacy.

Beginning with news the Finns had rejected (politely) a proposal by the U.S. to cease hostilities with Russia, who was now up to their eyes in battle with invading Germans. Since Russia had abandoned its neutrality pact with German some months earlier, they were now viewed as Allies with Britain and the U.S. and a further conflict with Finland was deemed counter-productive to the Russian cause of repelling the German advances. Finland wasn’t moved – and cited to the U.S. State Department that the Russians were still in possession of Finnish territories, as well as the historic fact that their neighbors to the east couldn’t be trusted, and they were making sure the Russians were far enough away from the Finnish border not to try anything again in the future. The State Department countered with a threat of withheld friendship towards the country unless they backed off. Finland countered their conflict with Russia had nothing to do with the war going on with Germany. At press time, nothing was settled.

But on the Eastern front all was in a state of chaos, with German advances in the Crimea and Russian counter advances. The infamous Russian Winter was fast approaching and it was universally acknowledged the Germans weren’t prepared for it. For their part, the German High Command was reporting the Russians were bringing in troops from Siberia to help defend Sevastopol, and the feeling in Berlin was this was a desperate measure on Moscow’s part and a sure sign Russian troop strength was dwindling.

Meanwhile, in the Far East, Japanese newspapers were carrying a bitter rejection of Secretary of State Knox’s comments that Washington was running out of patience with Tokyo and they were rapidly approaching a point at which it could not go. The newspapers ran headlines claiming Washington was firing poisonous guns and Japanese diplomacy and that the statements of Knox was stirring up anti-Japanese sentiment in Washington.

News from the Middle East came a report from Tehran that a Russian plane carrying U.S. and Soviet diplomats was overdue at Tehran airport. Sources claimed it may have been due to unscheduled stops. The plane was reported to have run into bad weather after a muddy takeoff from Kuybyshev, the temporary Capital of Russia.

From London came news regarding debate on War policy and Production, which was said to reflect the seriousness of the situation in Britain, and newspapers were attempting to diffuse a storm of criticism of government policy before it broke. Public opinion was demanding a second front be started and Downing Street was claiming that second front was going on in the Mediterranean and Middle-East. Criticisms were leveled at the lack of cooperation between the Navy and the RAF with both branches claiming the fault was each others. More would be revealed as days and hours went by. Meanwhile, severe new restrictions were being imposed in Britain on paper use, including extreme cutbacks in poster printing, a ban on facial tissue and a ban on Christmas cards and wrapping paper.

From Capitol Hill came news that Congress was looking at the matter of Defense strikes, now that the Coal Strike had temporarily halted, and were investigating ways to prevent them in the future. Even though the situation with the Coal Miners was in a confused state, principals of the Unions were summoned to Washington for hearings as a way of preventing a resumption of the strike, which the government threatened use of troops to get the workers back on the job. All of this was by way of Congress demanding an end to strikes for Defense work. The Justice Department queried if additional legislation was needed to insure a prevention of strikes, but the unanimous opinion was the laws were already there, they just needed to be enforced. And so it went.

But talk on Capitol Hill also turned to an address given the previous night by General Marshall of a plot to blow up much of the defense industry by way of a network of Axis spies, already spread out over the U.S. And that the Axis was actively engaged in a propaganda campaign aimed at America to spread the belief that morale was at an all-time low and defense workers were quitting in droves.

And that’s a little of what happened on this November 12th in 1941 as told by The Blue Network’s News Of The World.