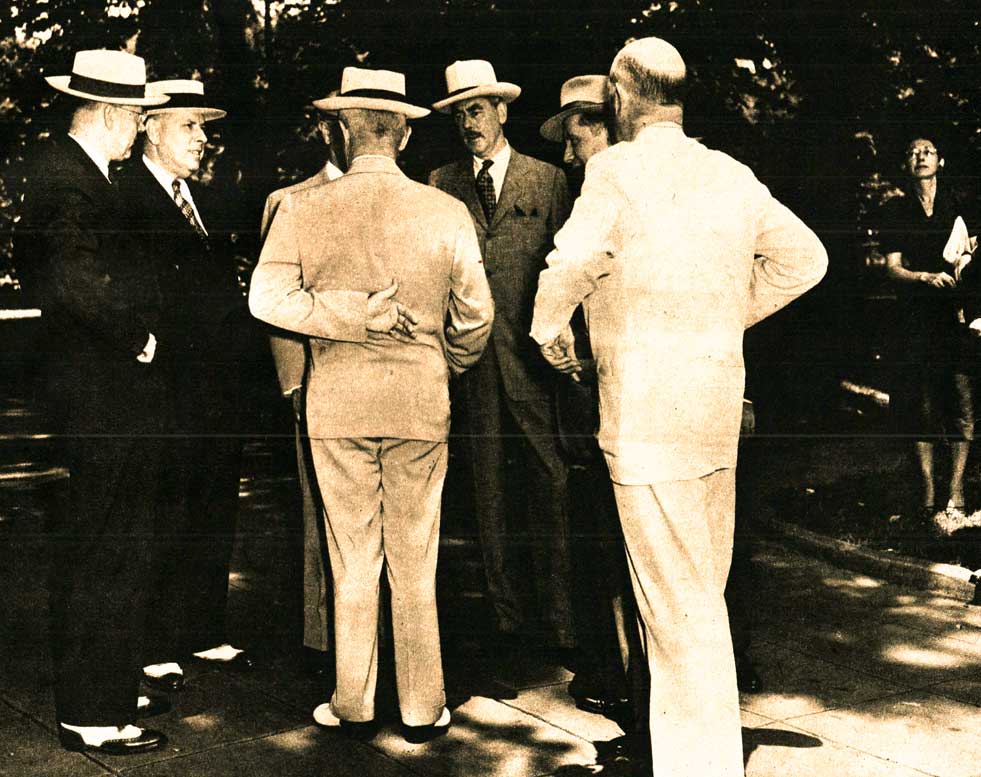 With the War over and the slow process of rebuilding underway, the economic woes of the world were becoming an increasing point of concern to the former Allies. Europe was in a shambles – destroyed in some places to the ground. Millions of refugees and displaced persons crammed what was left of some cities, took the slow unsure route to others in the hope of finding shelter and a new life.

And even among the Allies the road to reconstruction was a long and painful one.

So the onus of getting the world back on its feet was left up to the U.S. – our infrastructure hadn’t been damaged. Our cities not destroyed – we were, compared to the rest, in great shape. Although we were on shaky economic ground, we were still better off than the vast majority of countries who struggled through the War.

So on November 17, 1947, addressing a joint session of Congress, President Truman set out an appeal to increase our Foreign Aid to those countries in desperate need:

President Truman: “The Congress has been convened to consider two problems of major concern to the citizens of the United States and to the peoples of the world. The future of the free nations of Europe hangs in the balance. The future of our own economy is in jeopardy. The action which you take will be written large in the history of this Nation and of the world.

The Secretary of State and other representatives of the executive branch have appeared before the committees of Congress during the past week to present the facts regarding the necessity for immediate assistance by the United States to certain European countries. Austria, France, and Italy have nearly exhausted their financial resources. They must be helped if their peoples are to survive the coming winter, and if their political and economic systems are not to disintegrate. Exceedingly bad weather has brought on crop failures and fuel shortages, and has caused intense suffering. The food and fuel stocks of these countries are now near the vanishing point. Their peoples are in a dangerously weakened condition, due to years of short rations. Additional medical supplies and facilities are urgently necessary.

Austria needs $42 million, Italy needs $227 million, and France needs $328 million to buy food, fuel, and other essential goods during the next 4Ѕ months. Detailed information has been presented to your committees concerning these needs and the purposes for which the funds to be appropriated by the Congress would be spent.

Additional funds will also be required to maintain our position in occupied countries.

Emergency assistance by itself will not solve the European problems. Emergency aid is no substitute for a long-range recovery program, but it is a vital prerequisite to such a program. If the Western European nations should collapse this winter, as a result of our failure to bridge the gap between their resources and their needs, there would be no chance for them–or for us–to look forward to their economic recovery. The providing of interim aid will give us time to plan our part in an economic recovery program and it will give the peoples of Europe the strength to hold out until such a program begins.

I will shortly submit to the Congress recommendations concerning the long-range European Recovery Program. This program is the result of the combined efforts of thoughtful men of two continents whose concern has been the most effective manner in which 16 European nations, Western Germany, and the United States can work together for European recovery, world prosperity, and lasting peace.

It is a tribute to the strength of our democracy that we are able to make so great a contribution to the freedom and welfare of other nations and other peoples. This Nation is strong both in material resources and in the spirit of its people. Our economic strength, born of our system of free institutions, has contributed to raising the standard of living the world over. Our moral strength, resulting from our faith in human rights, is the inspiration of free men everywhere.

I refer to the strength of this Nation with humility, for it is an awe-inspiring truth that the manner in which we exert our strength now, and in the future, will have a decisive effect upon the course of civilization.

There is a truth whose significance grows with the experience of each passing day. The American people are becoming more and more deeply aware of their world position. They are learning that great responsibility goes with great power.

Our people know that our influence in the world gives us an opportunity–unmatched in history–to conduct ourselves in such a manner that men and women of all the world can move out of the shadows of fear and war and into the light of freedom and peace”.

Here is that speech, complete as given on November 17, 1947 and naturally, carried all over the world.