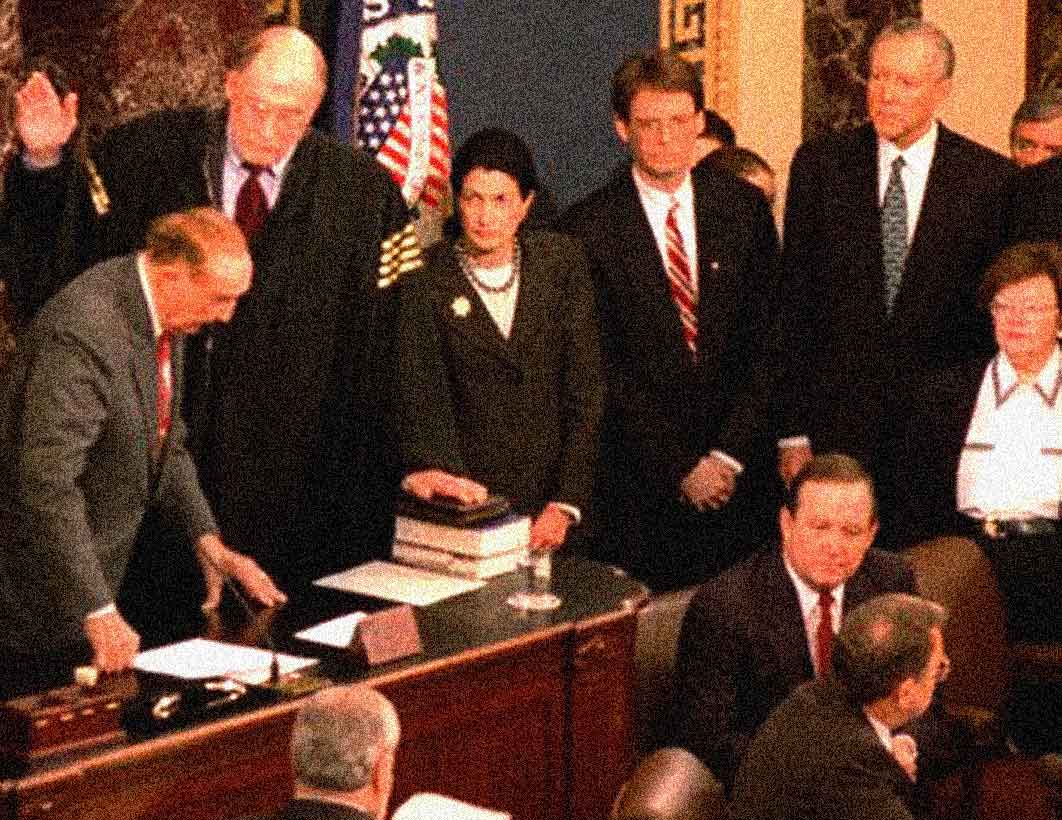 Of the Sound and Fury variety.

Of the Sound and Fury variety.

This January 14th in 1999 marked the first time in 131 years, Senators gathered to listen to arguments over whether or not to impeach President Clinton. For the next three days, 100 Senators would hear testimony, pore over documents and argue whether or not to call witnesses and ultimately vote to impeach or acquit the President of the United States.

Outside Capitol Hill the argument raged over whether this was a monumental waste of taxpayers money, a joke, a sick vendetta, the exercise of justice over the abuse of power, hypocrisy at its highest level or payback for Nixon and Watergate. It was time to talk about Impeachment of a sitting President.

Whatever it was, the eyes of the nation and a goodly chunk of the world were focused on Washington and the goings on in the Oval Office – of tales featuring cigars, blue dresses and smitten interns. Of plots, innuendos and late night confessions and Impeachment. All stuff of tabloids, to be sure. The rest of the world rolled its collective eyes, as the more pressing matters of life on the day-to-day took place, Impeachment or not.

Meanwhile, the Mayo Clinic released research that showed Women at high risk, had a better chance of beating Breast Cancer if they chose to also remove their healthy Breast via Prophylactic Mastectomy. The findings proved controversial, but did indicate that risk reduction was as high as 90% if the additional procedure was done.

Since it’s January and just as much January in 1999 as it was any other year, Cold Weather played a big part in the news for this day, at least if you lived on the East Coast. Delays were expected at airports all over the East due to heavy icing and snowstorms blowing in from the Mid-West. Another frozen morning in America.

And Denny’s was getting ready to air its latest ad campaign aimed at radio tolerance, just as a lawsuit was being filed against Denny’s for discrimination against Hispanics who claimed they were denied service by employees at a Denny’s in San Jose.

And Defense Secretary William Cohen said Saddam Hussein gambled and lost, thinking Clinton’s domestic brouhaha would prove distracting and overshadow the situation with Iraq. It didn’t. Allied embargoes and bombings of Iraq continued uninterrupted, as did the pressure on North Korea over its threats and saber rattling regarding its attempted Nuclear program.

And that’s a small slice of what went on this otherwise highly distracting January 14th in 1999, as presented by The CBS World News Roundup.