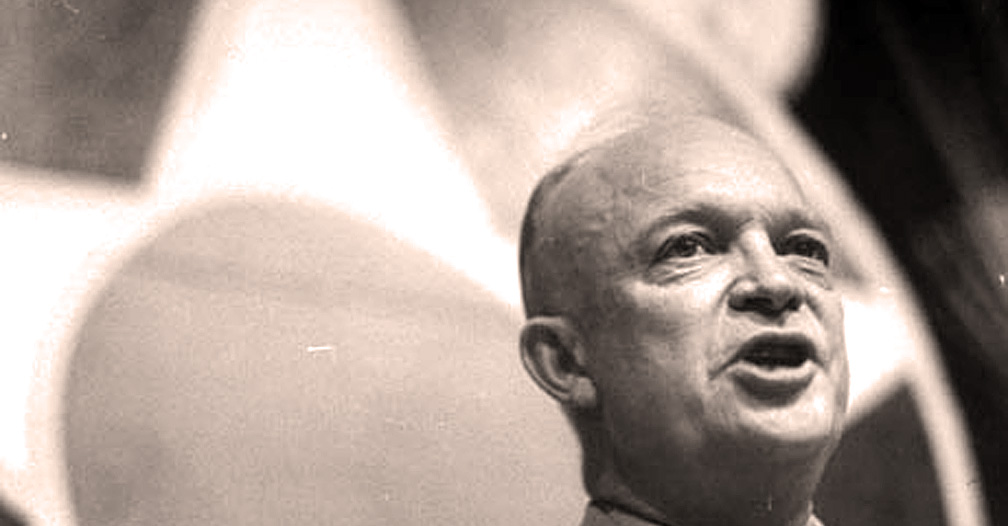 Eisenhower had a few things to say about our Defense budget - even in 1954.

Eisenhower had a few things to say about our Defense budget – even in 1953.

Even before his memorable Military-Industrial Complex Farewell address in 1961, President Eisenhower was all too aware of just how out-of-control military spending would become. In an earlier address in 1953, he warned that our obsession with Defense spending would obliterate all other programs desperately needed in our society.

He warned and warned repeatedly, but clearly, in all that time, not much attention was paid to our ever-increasing need for more-bigger-better weapons. The fear factor played a large part – it was the primary ingredient in obscuring common sense in favor of an unseen enemy, bent on destroying America at a moments notice.

Such fear has been the catalyst in our skyrocketing defense budget – one that continues to grow to the point where it has consumed most of our annual government spending.

In 1971 it was a point of concern, and the Eisenhower 1953 address became the basis for this documentary, The High Cost Of Defense from the Second Sunday radio series, first broadcast on October of 1971.

That we have shot way past even our most pessimistic assessment in 1971, gives some idea just how serious the situation has become. The nature of war has changed, yet the money spent increases, the fear escalates and the country goes lacking in even the most basic needs.

In 1971 we were fed up with The Vietnam War – a protracted conflict that drained lives and resources. We have had other wars since, each costing far more in lives, energy and intentions than they were worth.

In 1953, President Eisenhower broke it down – what was spent on Military hardware as opposed to what that money would have bought in the way of basic human needs. The difference between 1953 and 1971 was marked. 44 years later that sum is astronomical.

And in those 44 years, nothing has been done to stop it, to even reduce it. It just continues – and the gap gets wider and wider.

As a reminder of what planes and rifles and aircraft carriers cost in 1953 and 1971, here is that documentary; The High Cost Of Defense, as it was broadcast on October 10, 1971.