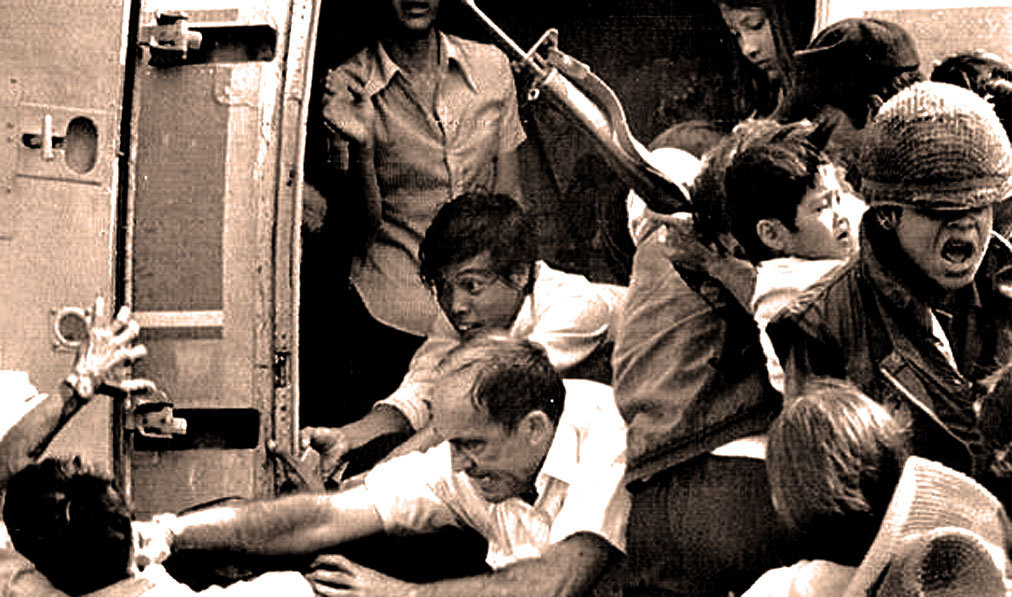 The panic was on.

The panic was on.

In what was previously described as a strategic withdrawal of South Vietnamese forces from key provinces, became a rout as South Vietnamese soldiers abandoned weapons and equipment and fled in front of advancing North Vietnamese troops, heading to Saigon.

As word spread, panic set in as the Saigon government attempted to declare martial law in the remaining cities surrounding the South Vietnamese Capital. U.S. Embassy staff in Nha Trang were busy packing and destroying documents, saying they were leaving as the military had lost control. At the American Consulate in Nha Trang, evacuations which had begun the previous day were sped up. Despite orders from Saigon to close Nha Trang airport, Consulate employees were busy loading the last planes with refugees heading to Saigon. Many felt Nha Trang would be in North Vietnamese hands by morning.

U.S. ships were standing by to take as many as possible refugees from Saigon, and the Pentagon was sending 700 Marines from Okinawa to protect the ships and the evacuation efforts. The North Vietnamese push south was gaining momentum. The South Vietnamese Army, in its headlong retreat may have destroyed or abandoned some $2 billion worth of military equipment supplied by the U.S., according to a Defense Department estimate. Despite that, the U.S. began a resupply effort, flying some 40 tons of military equipment for the South Vietnamese Army from Travis Air Force Base in California to Saigon. The shipment, primarily 105mm Howitzers which the South Vietnamese had lost during the current offensive, arrived earlier in the day. South Vietnamese officials said this was proof of President Ford‘s continued support of the war in Vietnam. However many people felt the resupply effort, no matter how much was slated to arrive, would be too little – too late.

Meanwhile, President Ford and Secretary of State Henry Kissinger were attempting to get the North Vietnamese to live up to the Paris Peace accords, but were having little or no success. It was further noted that the President had received a particularly gloomy report from Pentagon officials, saying in effect that Saigon could fall within a month, depending on how aggressive the North Vietnamese were and how shattered the morale of South Vietnamese troops was. The report went on to say that additional military aid from the U.S. wouldn’t make any difference. Even so, the President hoped Congress would pass emergency aid and didn’t want to anger Congress. Press Secretary Ron Nessen disputed news reports that Mr. Ford blamed Congress for the South Vietnamese retreat.

In Cambodia – President Lon Nol left Phnom Penh amid weeping colleagues and rebel rocket fire landing within 100 yards of his plane. While Cambodia fell to the Khmer Rouge, Nol made his way to Bali.

It was a day where news was changing and becoming more ominous by the hour.

But there was other news.

The Middle East Peace talks were slated to begin again with Egypt asking formally that the U.S. and the Soviet Union reconvene the Geneva Peace Talks.

Back home – Federal investigators uncovered another $ 1/2 million worth of overcharges on fuel oil sold to Utility companies. Officials estimated that overcharges alone may total over $20 million. The widespread cheating on prices may have occurred during the oil crisis of 1973 and 1974 and came about by the varying prices between “new oil” and “old oil”. Old Oil from wells drilled more than two years earlier, was controlled by the government at a fixed price about $5.00 a barrel. New Oil, from newly drilled wells was not controlled. The higher prices charged by the well owners was passed along to the refineries and eventually to the retailers, which explained the sudden jump in prices at the pump during the Oil Shortage.

And the dream of owning one’s own home was becoming a thing of the past, even in 1975, due to skyrocketing Mortgage rates and housing costs. So, as an incentive to jumpstart the flagging housing market, President Ford reluctantly signed a new Tax law that provided, among other things, a considerable tax credit to people who buy houses by the end of the year.

And that’s just a sample of what went on this April 1st, 40 years ago as provided by NBC’s Nightly News.