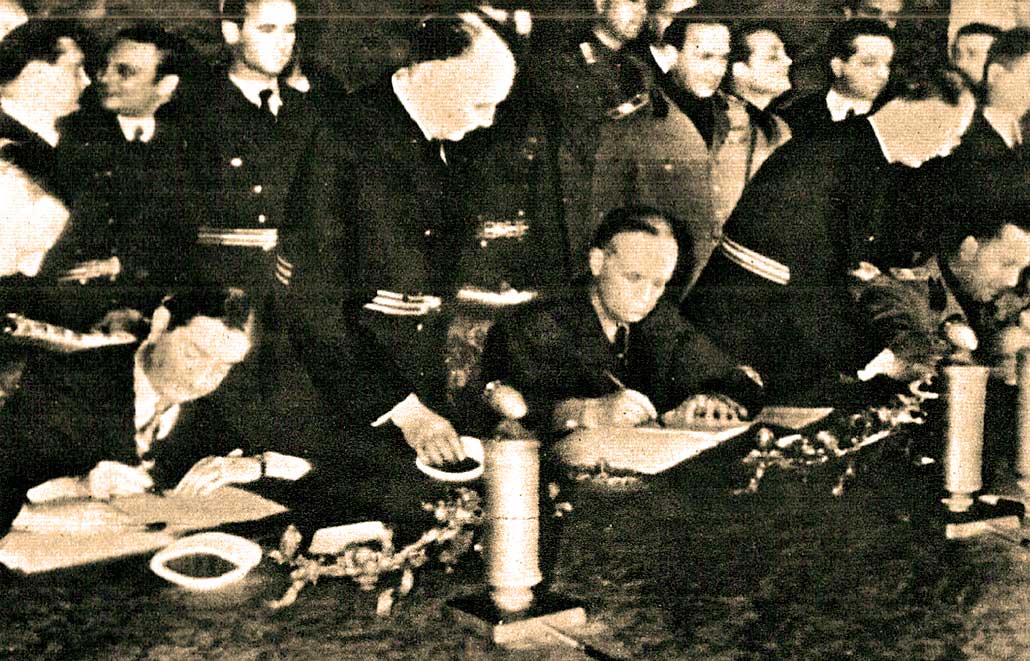 April 6, 1941 – War In The East – Germany Declares War On Greece And Yugoslavia

With the sudden turn of events in the Balkans, Germany had now opened an Eastern Front. While this broadcast was on the air, Germany had declared war on Greece and Yugoslavia, and was moving mechanized forces across the Yugoslavia border. Events were moving swiftly in this region of the world. With the apparent suicide of Count Teleki, the Premier of Hungary, and German forces retaking Benghazi in Libya, the Eastern Front was shaping up to becoming the new hot spot in this War.

While the Germans had retaken Benghazi, British forces were overrunning Italian positions, forcing Germany to send reinforcements.
All of this was considered to be a plan by Britain to engage the Germans on several fronts, thus draining supplies and lessening the chances of an invasion of Britain anytime soon and to weaken Germany by attrition. Many felt this was a replay of events leading to the end of the First World War, where Germany was forced to fight on the Eastern and Western fronts at the same time. Hitler was aware of this, and was trying to avoid opening a second front, possibly the reason for the non-aggression Pact with Russia. Initially, his Balkan campaign was being waged by diplomacy rather than fighting. But the plans for avoiding a second front went awry when Mussolini attacked Greece in October of 1940, and Greece’s resistance to the Italians became the second front Britain was looking for. The result erupted in a feud between Mussolini’s Fascist government and the Italian Army, coupled with the Italian public’s resentment over the increasing takeover of the Mussolini government by the Nazis. Further evidence was the latest communique saying Germany was sending four divisions of troops into Italy for service in Albania – all indications Italy’s empire was in the process of falling apart. Italian losses in Eastern Africa and the loss of Eritrea further dampened morale around Rome, along with British victories in Ethiopia and the surrender of Adis-Ababa. Only the German presence in Libya with mechanized divisions in Benghazi, forced a retreat of British troops to Egypt were Britain had defeated the Italian Army earlier.

And then there was the matter of Turkey, who had been reluctant to join Britain since much-needed supplies from Britain weren’t forthcoming as promised. Talks between Turkish representatives and British representatives were proceeding well, and it was felt that, with the outbreak of war between Yugoslavia and Germany, Turkish support of Britain and Russia would be assured.

Further adding to this new series of developments was President Roosevelt’s hint earlier in the week, that the U.S. might open the Red Sea to American shipping, as soon as Britain completed its conquest of Italian East Africa. Under the conditions of the 1939 Neutrality Act, the U.S. could supply Britain’s African Forces with foodstuffs and raw materials, but not with armaments. It was felt however, that this act could further precipitate another crisis in America’s already tenuous relations with the Axis powers, since U.S. vessels en route to the Red Sea ran the risk of attack by German ships. Up until now, American ships had been barred from the Red Sea war zone and U.S. arms had been carried in British vessels.

And so the situation in the East, this new Eastern Front was, as the Foreign Policy Association spokesman on this broadcast put it, fluid at best.

And that’s how the situation boiled down for the week ending April 6, 1941 as presented by The Foreign Policy Association and their weekly broadcast, recapping the events of this war for The Blue Network.