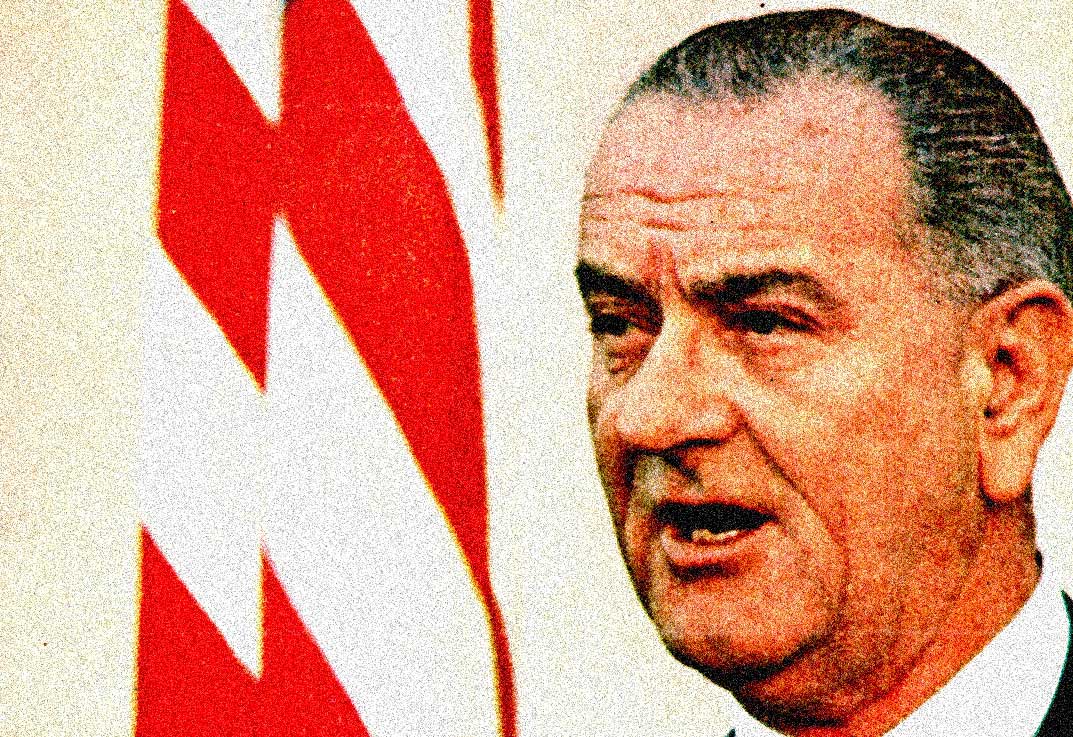 LBJ - "This will be a disorderly planet for a long time".

LBJ – “This will be a disorderly planet for a long time”.

In what was billed as a Major Foreign Policy Address over our involvement in Vietnam, LBJ delivered a speech at Johns Hopkins University, this day in 1965. The subject was Vietnam, and the intent was to get America used to the idea of getting itself geared up for another war.

What seemed inevitable was finally coming to fruition – we were getting involved in the Vietnam conflict and our involvement was getting deeper by the day. But in 1965 opposition to it was sparse; there was still opposition, much of it relegated to college campuses and marginalized by the media and the government as the rant of a Communist-inspired minority.

LBJ: “Tonight Americans and Asians are dying for a world where each people may choose its own path to change.

Viet-Nam is far away from this quiet campus. We have no territory there, nor do we seek any. The war is dirty and brutal and difficult. And some 400 young men, born into an America that is bursting with opportunity and promise, have ended their lives on Viet-Nam’s steaming soil.

Why must we take this painful road?

Why must this Nation hazard its ease, and its interest, and its power for the sake of a people so far away?

We fight because we must fight if we are to live in a world where every country can shape its own destiny. And only in such a world will our own freedom be finally secure.

This kind of world will never be built by bombs or bullets. Yet the infirmities of man are such that force must often precede reason, and the waste of war, the works of peace.

We wish that this were not so. But we must deal with the world as it is, if it is ever to be as we wish.

THE NATURE OF THE CONFLICT
The world as it is in Asia is not a serene or peaceful place.

The first reality is that North Viet-Nam has attacked the independent nation of South Viet-Nam. Its object is total conquest.

Of course, some of the people of South Viet-Nam are participating in attack on their own government. But trained men and supplies, orders and arms, flow in a constant stream from north to south.

This support is the heartbeat of the war.

And it is a war of unparalleled brutality. Simple farmers are the targets of assassination and kidnapping. Women and children are strangled in the night because their men are loyal to their government. And helpless villages are ravaged by sneak attacks. Large-scale raids are conducted on towns, and terror strikes in the heart of cities.

The confused nature of this conflict cannot mask the fact that it is the new face of an old enemy.

Over this war–and all Asia–is another reality: the deepening shadow of Communist China. The rulers in Hanoi are urged on by Peking. This is a regime which has destroyed freedom in Tibet, which has attacked India, and has been condemned by the United Nations for aggression in Korea. It is a nation which is helping the forces of violence in almost every continent. The contest in Viet-Nam is part of a wider pattern of aggressive purposes.

WHY ARE WE IN VIET-NAM ?
Why are these realities our concern? Why are we in South Viet-Nam ?

We are there because we have a promise to keep. Since 1954 every American President has offered support to the people of South Viet-Nam. We have helped to build, and we have helped to defend. Thus, over many years, we have made a national pledge to he!p South Viet-Nam defend its independence.

And I intend to keep that promise.

To dishonor that pledge, to abandon this small and brave nation to its enemies, and to the terror that must follow, would be an unforgivable wrong.

We are also there to strengthen world order. Around the globe, from Berlin to Thailand, are people whose well-being rests, in part, on the belief that they can count on us if they are attacked. To leave Viet-Nam to its fate would shake the confidence of all these people in the value of an American commitment and in the value of America’s word. The result would be increased unrest and instability, and even wider war.”

Ironically 10 years and three Presidents later, to the month, the war would finally grind to an end. The war with seemingly no end and questionable motives was finished.

Here is President Johnson’s complete address to Johns Hopkins University, given on April 7, 1965.