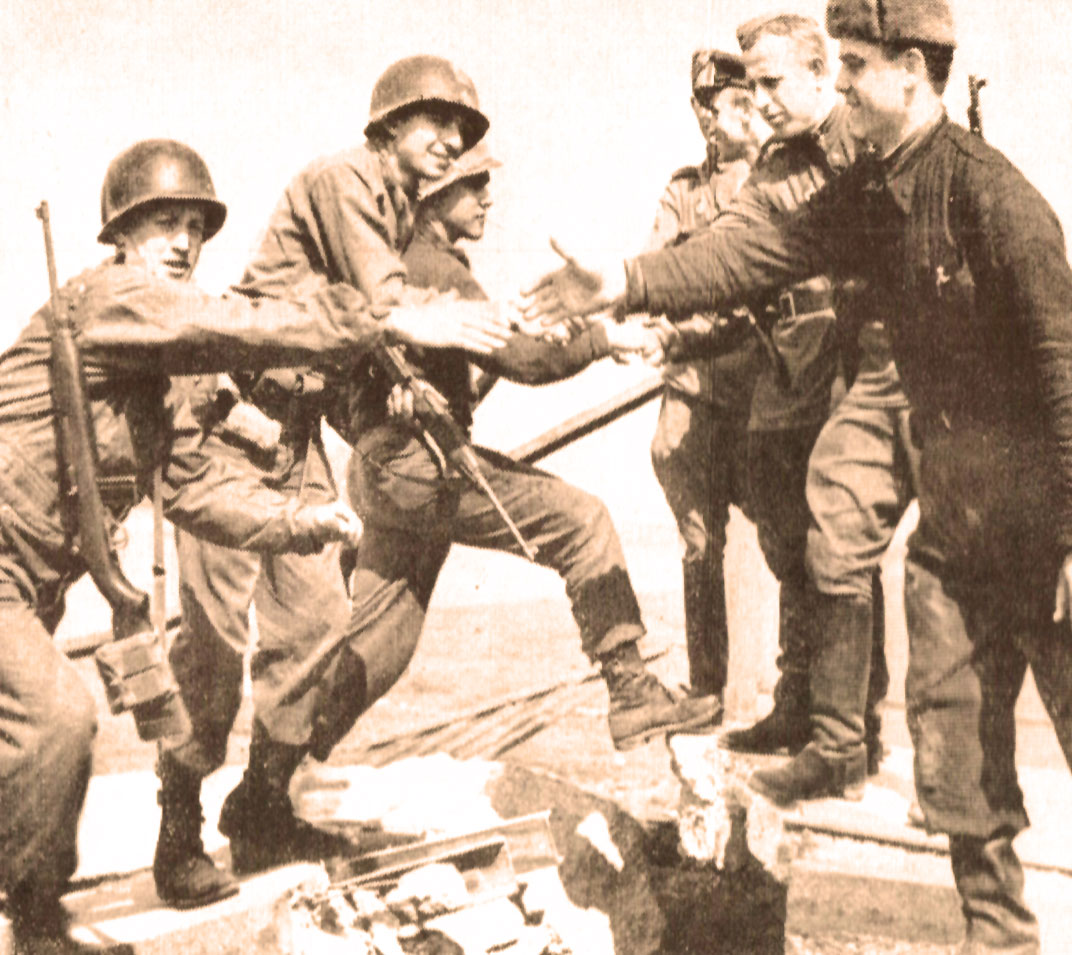 You may not think a buck gets anything, but it does: Become a Patron!

Very big news this day, 70 years ago. The link up of Soviet, British and American forces at the Elbe River, effectively cutting Germany in two and almost certainly sealing the fate of the War in Europe and an Allied victory.

The White House issued a statement regarding the decisive meeting of the two armies:

THE ANGLO-AMERICAN armies under the command of General Eisenhower have met the
Soviet forces where they intended to meet-in the heart of Nazi Germany. The enemy has been
cut in two.

This is not the hour of final victory in Europe, but the hour draws near, the hour for which all the
American people, all the British peoples and all the Soviet people have toiled and prayed so
long.

The union of our arms in the heart of Germany has a meaning for the world which the world will
not miss. It means, first, that the last faint, desperate hope of Hitler and his gangster government
has been extinguished. The common front and the common cause of the powers allied in this war
against tyranny and inhumanity have been demonstrated in fact as they have long been
demonstrated in determination. Nothing can divide or weaken the common purpose of our
veteran armies to pursue their victorious purpose to its final triumph in Germany.

Second, the junction of our forces at this moment signalizes to ourselves and to the world that
the collaboration of our nations in the cause of peace and freedom is an effective collaboration
which can surmount the greatest difficulties of the most extensive campaign in military history and
succeed. Nations which can plan and fight together shoulder to shoulder in the face of such
obstacles of distance and of language and of communications as we have overcome, can live
together and can work together in the common labor of the organization of the world for peace.

Finally, this great triumph of Allied arms and Allied strategy is such a tribute to the courage and
determination of Franklin Roosevelt as no words could ever speak, and that could be
accomplished only by the persistence and the courage of the fighting soldiers and sailors of the
Allied Nations.

But, until our enemies are finally subdued in Europe and in the Pacific, there must be no
relaxation of effort on the home front in support of our heroic soldiers and sailors as we all know
there will be no pause on the battle fronts.

Breathless reports and eye-witness accounts and cautions this didn’t mean it was V-E day, even though a lot of celebration was going on. It meant the final push to Berlin and the final defeat of Germany was days, if not hours away.
And so the day was filled with bulletins and re-caps and breaking news, along with hurried connections from correspondents on the scene, all created a heightened sense of anticipation that one aspect of the war would be over soon.

Here is a one-hour extract of breaking news that day, as reported on NBC Radio from April 27, 1945.