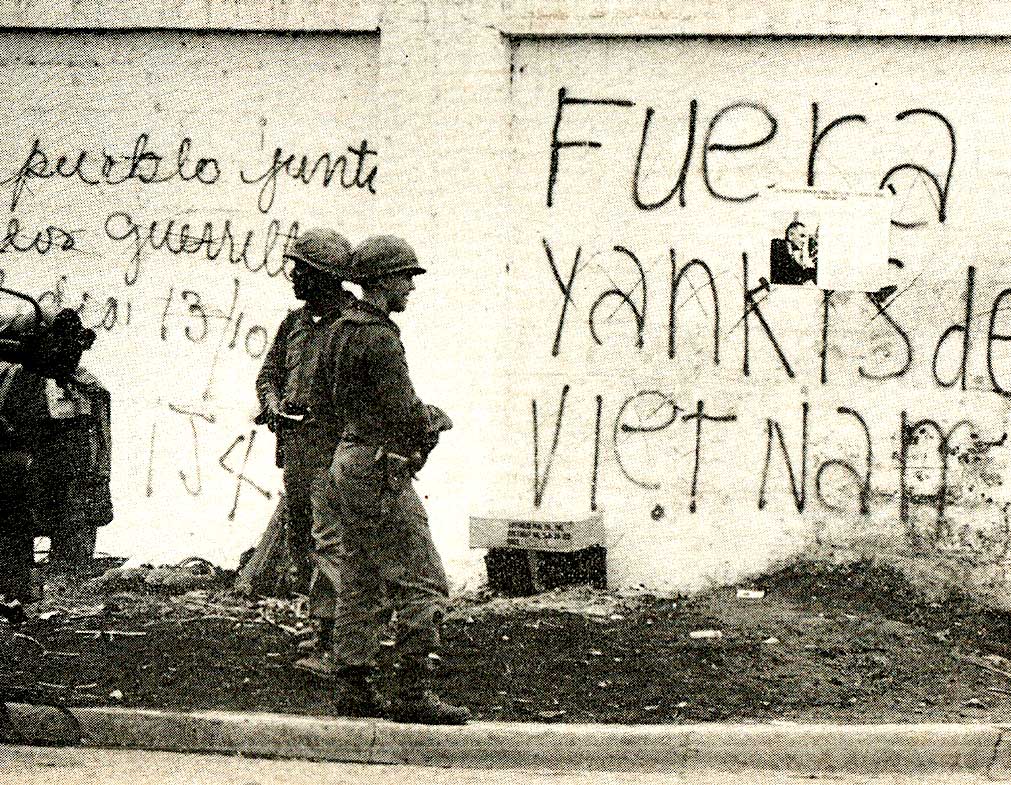 May 13, 1965; we were embroiled in another Latin–American conflict. This time it was the Dominican Republic and a coup with leanings towards a Civil War which erupted in April.

In the early morning of April 27, 1,176 foreign civilians who had previously assembled in Hotel Embajador were airlifted to the Bajos de Haina naval facility, where they boarded USS Ruchamkin and USS Wood County, as well as the helicopters of HMM-264 which evacuated them from the island to USS Boxer and USS Raleigh. Later in the day, 1,500 loyalist troops supported by armored cars and tanks marched from the San Isidro Air Base, capturing the Duarte bridge and taking position on the west bank of the Ozama river. A second force consisting of 700 soldiers left San Cristóbal and attacked the western suburbs of Santo Domingo. Rebels overran the Fortaleza Ozama police headquarters, taking 700 prisoners. On April 28, armed civilians attacked the Villa Consuelo police station, executing all the police officers who survived the initial skirmish. One U.S. Marine battalion landed in Haina, later moving to Hotel Embajador where it provided assistance in the upcoming airlifts. During the night, 684 civilians were airlifted to USS Boxer. One U.S. Marine was killed by a rebel sniper during the operation.

On April 29, U.S. Ambassador to the Dominican Republic William Tapley Bennett, who had previously sent numerous reports to President Lyndon Johnson, reported that the situation had reached life-threatening proportions for U.S. citizens and that the rebels received foreign support. Bennett stressed that the United States must act immediately as the creation of an international coalition would be time-consuming. Contrary to the suggestions of his advisers, Johnson authorized the transformation of evacuation operations into a large-scale military intervention through Operation Power Pack, aiming to prevent the development of what he saw as a second Cuban Revolution. It was the first U.S. military intervention in Latin America in more than 30 years.

At 2:16 AM on April 30, 1965, the 3rd Brigade of the 82nd Airborne Division landed at the San Isidro Air Base, beginning the American military intervention in the conflict. During the next couple of hours, two brigade combat teams and heavy equipment were also dispatched. At sunrise the 1st Battalion, 508th Infantry Regiment moved up the San Isidoro highway, securing a position east of the Duarte bridge. The 1st Battalion 505th Infantry Regiment remained at the airbase and sent out patrols to the perimeter. A force of 1,700 Marines of the 6th Marine Expeditionary Unit occupied an area containing a number of foreign embassies; the locale was proclaimed an International Security Zone by the Organization of American States (OAS). Earlier in the day, OAS also issued a resolution calling the combatants to end all hostilities. At 16:30 hrs, representatives of the loyalists, the rebels and the U.S. military signed a ceasefire that was to take effect at 23:45 hrs. The treaty’s timing favored the demoralized loyalists, who had at that point lost control of Ciudad Colonial.

On 5 May, the OAS Peace Committee arrived in Santo Domingo, a second definite ceasefire agreement was then signed ending the main phase of the civil war. Under the Act of Santo Domingo, OAS was tasked with overseeing the implementation of the peace deal as well as distributing food and medication through the capital. The treaties failed to fully prevent violations such as small scale firefights and sniper fire. A day later, OAS members established the Inter-American Peace Force (IAPF) with the goal of serving as a peacekeeping formation in the Dominican Republic. IAPF consisted of 1,748 Brazilian, Paraguayan, Nicaraguan, Costa Rican, Salvadoran and Honduran troops; it was headed by Brazilian general Hugo Panasco Alvim, with U.S. Army General Bruce Palmer serving as his deputy commander.

Amid unsubstantiated rumors the rebels were “communist inspired”, President Johnson sent a contingent of U.S. troops to aid in evacuating American civilians and government workers. The small contingent of troops landed on April 29th and were immediately stuck in the middle of crossfire between rebel forces and coup elements, and the U.S. presence shifted from evacuation to restoring order and 42,000 additional U.S. Marines landed.

The conflict was taken up by the UN Security Council and calls for a multi-national force of peacekeepers were made to the OAS.

This report, from Day 16 of the conflict, covers the diplomatic attempts at restoring order, and the ongoing fighting in the streets of Santo Domingo. In the two weeks since the Marines had landed, some 18 Americans were killed by sniper fire.

All this from an ABC Radio News Special Report on the Crisis in The Dominican Republic, for May 13, 1965.