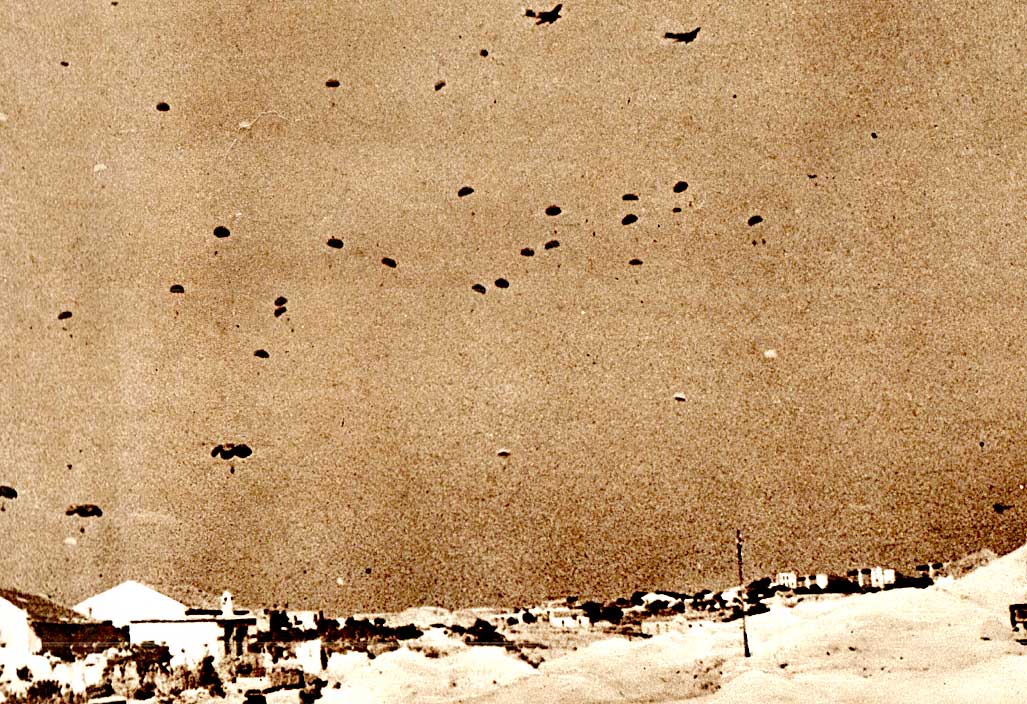 . . . and suddenly the sky was filled with little black dots.

. . . and suddenly the sky was filled with little black dots.

News for this May 22nd in 1941, which was the 627th day of War, was about the continuing expansion of the War in Europe. The Germans were now focusing their attention on Crete, and sending the first wave of Paratroops, landing on the island. Reports of strenuous fighting were taking place, but no confirmed reports.

The matter of American passengers, traveling on the Egyptian ship Zamzam, which was sunk by German U-Boats, were scheduled to be released once a thorough investigation had taken place to determine if the American passengers were actually Americans, since many of their identification papers were left on the ship when it was hit by torpedoes.

The war was busy on all fronts, with fighting in the Middle East and the Mediterranean ramping up.

There was also news from Berlin that rationing of tobacco was now down to 5 cigarettes or 1 cigar per person per day. It was now a common site to see people lined up in front of tobacco shops for blocks, waiting for their daily rations.

The matter of Vichy, or occupied France was the subject or discussion in London. With reports that the Vichy government was now taking an active collaborative role with Germany was seen a change of position from the previous role of the unwilling tool of Germany, which was encouraged to offer as much resistance as possible to German demands. Now that policy has ended. The recent actions of the Vichy French were seen in London as incompatible with the concept of French honor.

Meanwhile, on Capitol Hill – New York’s Mayor La Guardia was coming to Washington to assume the role of head of the Office of Civilian Defense. The Office of Production Management was asking the Army to ask Congress for another $4 billion for tanks and planes.

Pickets marching in front of the White House, protesting the U.S. involvement in the War in Europe were the objects of scuffles involving some members of the military. The group staging the protest, The Peace Mobilization Group, was labelled by the Dies Committee as a Communist front organization and was purported to be actively organizing labor strikes within the Defense community.

And that’s just a sample of what went on, this May 22nd in 1941 as reported by The Blue Network’s News Of The World.