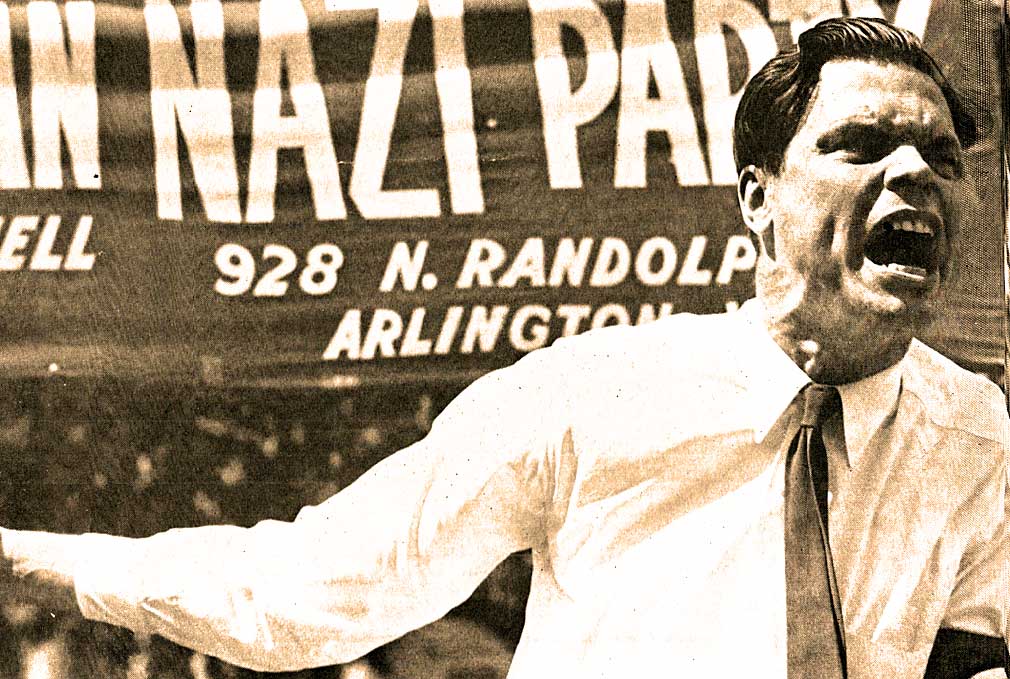 Photo: George Lincoln Rockwell - American Nazi Party - 'we are a violent people with a violent history, and the instinct for violence has seeped into the bloodstream of our national life.' - Arthur Schlesinger, jr.

Photo: George Lincoln Rockwell – American Nazi Party – ‘we are a violent people with a violent history, and the instinct for violence has seeped into the bloodstream of our national life.’ – Arthur Schlesinger, jr.

With the latest act of horrific violence visited on, of all places, a Church Bible Study in Charleston South Carolina yesterday, the decades-old conversation about hate, racism and violence in our society bubble to the surface, like an open sore, once again.

The conversation is as old as America. The violence continues without stopping. The hate is embedded in our society. The ignorance is far-reaching and deep-seeded. The notion that murders, such as the one which took place last night are the work of a “lone wolf” or “deranged individual” conveniently sweep the issue under the carpet, tie a ribbon of faux-concern around the problem, wait patiently for the next distraction to arrive so the subject can be quickly changed and quietly forgotten about.

This has been a most violent year; more violent than perhaps most in the last few decades. The surge in Hate Groups in the U.S. has shot up by an alarming rate, and the incidents of violence have multiplied accordingly on an almost daily basis.

And again, there is a call for dialogue; a conversation about the attitudes of race in America today, the racism that permeates our institutions and our ways of life – the sickness that has overtaken us.

Calls for conversation and dialogue are laudable and desperately needed at every step. But here’s the problem; the ones needing to actually hear the conversation, to take part in it, to take responsibility for their actions, refuse to. Those people, so imbued with a sense of twisted superiority, are so deluded and indoctrinated in generations-old hatreds and nightly rants, that dialogue is out of the question. The rational words on insane ears have no effect. And the ones left in the conversation are members of the choir.

The problem is ignorance and the sickness is those who should know better, but stoke the hatreds anyway for purposes of agenda, audience and advertisers.

But if you think these acts of violence are new – these outrages are products of the “new racism” that has sprung up since 2008, you would be wrong. It’s always been there, just hidden slightly out of view for a long time.

As evidence of that, here is a documentary produced in 1969. Called America: The Vision and The Violence, it looks at the state of hatred and violence in this country from 46 years ago. There was a call for conversation then, a call for dialogue. Then as now, it fell on deaf ears, those who needed to hear it most. There was the Vietnam War and Protest to it then – the conversation faded into the background and was quietly forgotten – until the next time.

The question is; will it ever change?

And again, there are calls for conversation. Maybe this time it will be different; the treadmill may stop once and for all. Or maybe like the last time, fists were pounded, tears were shed, questions over our nation’s sanity were raised – and then quietly forgotten, distracted by the next shiny object, until the next time.

Those are the choices.

Here is what they were talking about in 1969 with America: The Vision And The Violence from NBC Radio, broadcast on March 3, 1969.