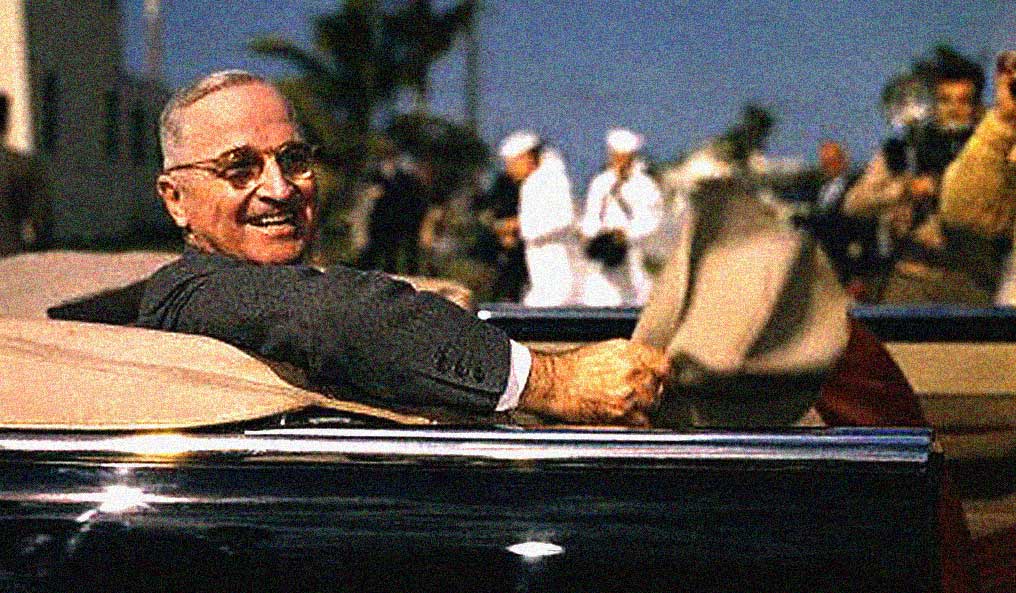 4th of July, 1947. Smack in the middle of Postwar reconstruction and grumblings of Cold Wars and Iron Curtains and talk of Independence and the Middle East getting ready to explode. Of instability and civil wars in Greece and refugees and displaced persons and cities slowly coming back to life.

And there we were, celebrating our own Independence and Harry Truman was our President. The sigh of relief and the Big Question Mark. One war ends and another threatens. The future was bright, even if bright meant the initial blast and the fallout after and no life left in between. Brave times and America was still the land of opportunity and still gladly accepting huddled masses.

President Truman:“The Declaration of Independence was an expression of democratic philosophy that sustained American patriots during the Revolution and has ever since inspired men to fight to the death for their “unalienable Rights.”

The standard phrase used by writers of Jefferson’s day to describe man’s essential rights was “life, liberty and property.” But to Jefferson, human rights were more important than property rights, and the phrase, as he wrote it in the Declaration of Independence, became “Life, Liberty and the pursuit of Happiness.”

The laws and the traditions of the colonies in 1776 were designed to support a monarchial system rather than a democratic society. To Thomas Jefferson the American Revolution was far more than a struggle for independence. It was a struggle for democracy.

Within a few weeks after independence had been proclaimed at Philadelphia, Jefferson resigned his seat in the Continental Congress and returned to his place in the Virginia Legislature. There he began his monumental work of laying the foundation of an independent democracy.

Within a few years the Virginia Legislature, under Jefferson’s leadership, instituted full religious freedom, abolished the laws which had permitted great estates to pass undivided from generation to generation, prohibited the importation of slaves, revised the civil and criminal code of laws, and established a general system of public education. These acts, according to Jefferson, eradicated every fiber of the ancient and future aristocracy. These acts formed the basis for a truly democratic government.

Jefferson knew it was necessary to provide in law the requisites for the survival of an independent democracy. He knew that it was not enough merely to set forth a Declaration of Independence.”

That was The Fourth Of July in 1947. Different from our current Fourth Of July. People and circumstances and motives have changed – no longer a Cold War but a war of ideologies. No longer Iron Curtains but melting ice caps. The huddled masses huddle adrift on boats and not on Ellis Island. Some things change – some things remain the same. Human nature just never goes anywhere.

And it’s another Fourth Of July – where the fireworks happen on the 2nd or 3rd or even the 1st – and the Roman Candles trigger PTSD and a good excuse to get loaded. And its another celebration and another holiday and the last one until September. Better make it last.

So here is President Harry S. Truman‘s 4th Of July Address, as the world turned in 1947.