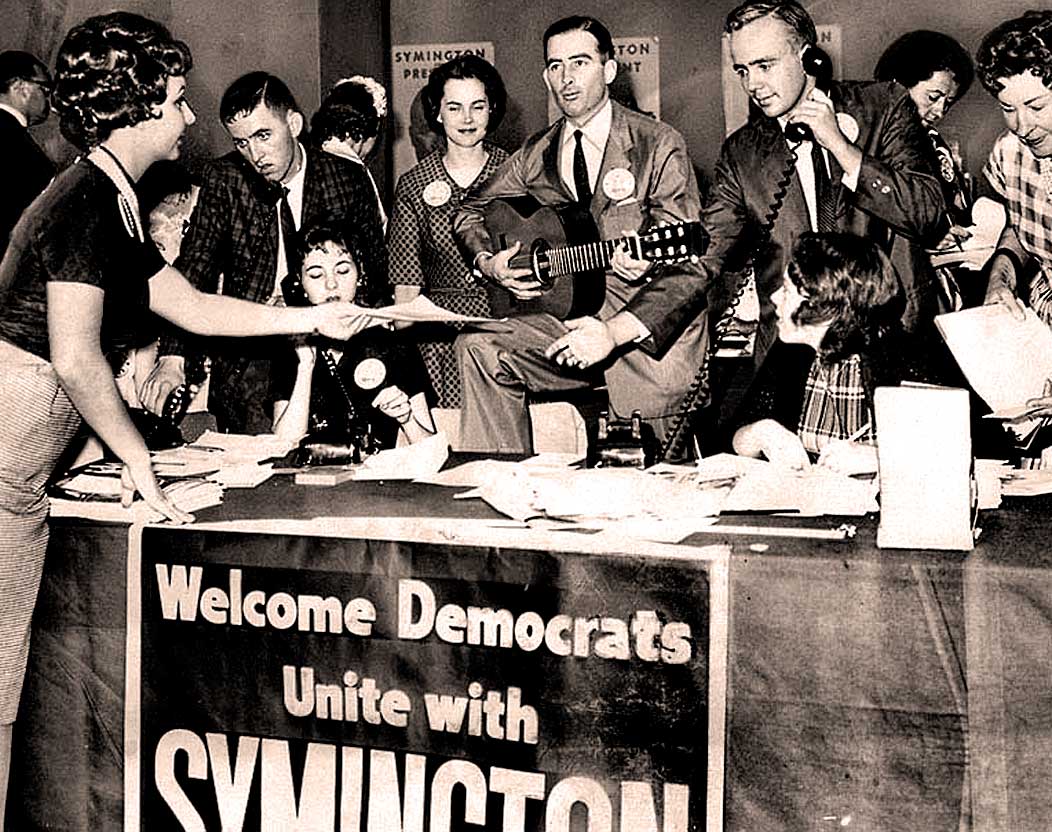 1960 Democratic Convention – Stuart Symington supporters – hoping up to the last minute that fortunes would change.

As the excitement surrounding the Democratic Convention reached a fever-pitch, the airwaves were flooded with a seemingly endless barrage of programs dealing with the Convention itself, the candidates, the sure-bets, the odds-on favorite, the dark horses and the hoopla coming to Los Angeles in less than a week.

As part of its countdown, NBC Radio began airing a series of reports (the first began yesterday), running down what to expect and what not to expect in the way of Election year drama over the coming days.

Senator John F. Kennedy was the odds-on favorite, but there were still holdouts for some of the other candidates. Adlai Stevenson was looking like a long shot, but there were delegates who remembered 1952. Stuart Symington was another dark-horse as was Lyndon Johnson, who declared his candidacy rather late in primary season. Many of the holdouts were jockeying for bargaining positions and some Democrats just wanted to keep the suspense going.

The Democratic platform in 1960 was the longest yet. They called for a loosening of tight economic policy: “We Democrats believe that the economy can and must grow at an average rate of 5 percent annually, almost twice as fast as our annual rate since 1953…As the first step in speeding economic growth, a Democratic president will put an end to the present high-interest-rate, tight-money policy.” Other planks included national defense, disarmament, civil rights, immigration, foreign aid, the economy, labor and tax reform. Senator Sam Ervin of North Carolina attempted to soften the party’s plank on civil rights. A speech by Hawaii delegate Patsy Mink persuaded two-thirds of the party to keep their progressive stance on the issue.

Due to its size, the Biltmore Hotel was selected to serve as the headquarters hotel for the Democratic National Committee. It also housed command-posts for the campaigns of the various candidates seeking the nomination, temporary studio spaces for the television networks, and workspaces for select print journalists.

So the Carnival atmosphere was beginning to take shape. Los Angeles was gearing up for the onslaught – and even though L.A. was used to displays of pomp and pageantry – this entertainment was all political.

As a reminder that Political conventions were not always cut-and-dried affairs, here is the second preview report from the 1960 Democratic Convention, broadcast on July 6, 1960 by NBC Radio.