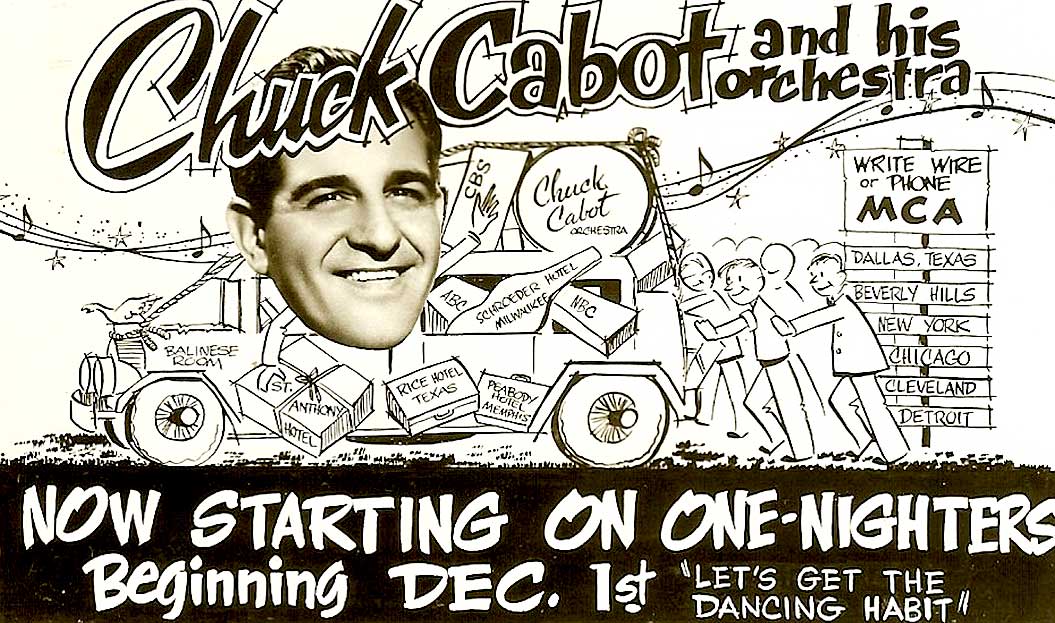 Big bands were rapidly vanishing - but there was still a youth market to consider.

Big bands were rapidly vanishing – but there was still a youth market to consider.

As a distinct contrast between my Lennie Tristano post earlier today, I ran across this tape, and noted only a year separated the two. The Trstano concert from 1952 and this one from Chuck Cabot and his orchestra from 1953.

Bear in mind that, Tristano represented the underground and not the mainstream in music at the time. Jazz had a pretty broad set of definitions, as anyone reading a copy of Downbeat Magazine from those years will realize. Musicians like Konitz, Tristano, Mulligan, Parker and Monk were not considered mainstream – it would be the equivalent to Alternative/Experimental today. A solid audience, to be sure. But not one which everyone listened to, at least in 1953.

The Cabot orchestra represented the Big Band era in its declining days. There was still a need for Dance music – something not too pressuring on the intellect – something to serve as a background to be listened at, and not particularly listened to.

And there were a number of these bands, dotting the country – playing hotels and the remaining ballrooms in each town; usually consisting of pickup musicians from the local unions. Most of these bands played one-nighters, or limited engagements at those hotels.

What’s interesting about Chuck Cabot (whose real name was Carlos Cascales; born in Querétaro, Mexico) is that he was the brother of Johnny Richards (born Juan Cascales in the same town), who was an arranger for Stan Kenton and became one of the pivotal figures in the Progressive Jazz movement in the 1950s. Chuck eventually left the Big Band scene and became a Talent Agent and was responsible for the first West Coast bookings for The Rolling Stones in 1964 as well as a number of rock acts in the early 1960s.

So – how things morph and change and people reinvent themselves. But that’s another story.

To give you some idea of the musical climate in America, prior to the dawn of Rock n’ Roll (which was still, by all accounts, two years off) – this is what mainstream America was listening and dancing to in 1953. Contrary to what you may have heard – nothing happened overnight. Progress, no matter what it is, usually takes a long time.

Listen with an open, historic mind.