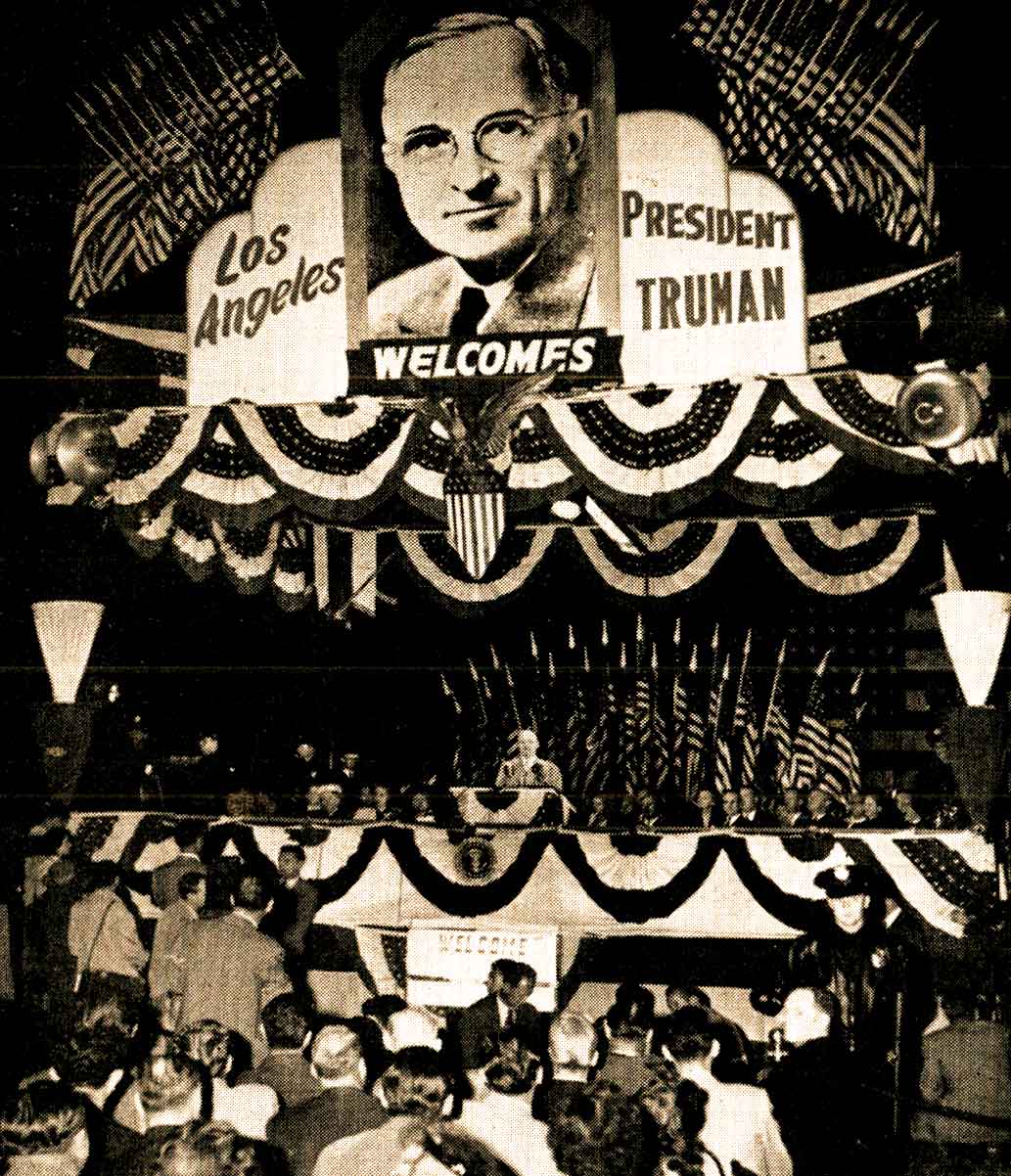 First day of Fall, 1948. Election season was in full-swing. So was the Berlin crisis. So was the Cold War.

In Britain, Foreign Secretary Ernest Bevin told the House of Commons that Britain, France and the U.S. were bound together in their opposition to Soviet aggression in Europe. They were giving the Kremlin one more chance to ease tensions over the blockade of Berlin to avoid a complete break. Bevin went on to add that steps were being taken, and would be taken over the blockade issue, but that it didn’t mean war, yet.

Meanwhile, the election ballyhoo was heading to the final stretch, with Dewey appearing before a crowd in Albuquerque New Mexico, Truman appearing in Reno Nevada. Dewey talked about inflation at home and peace in the world – Dewey called for cutting government spending and maintaining a substantial surplus of government revenues. National income, Dewey went on to say, was at such high levels, that the U.S. could build up the military, reduce the debt as well as taxes. Truman spoke about the 80th (do-nothing) Congress. He asked the voters to fire the 80th congress because it was, as Truman put it; “led by a bunch of old mossbacks”. A Republican victory would return control of the government to the interests of Big Business. He went on to say the Republicans wanted to set up a ruling class in America – and added it was a question of supporting people who wanted to turn the clock back and people who had the interests of working Americans at heart.

The House Un-American Activities Committee hearings were continuing. The fear factor of Communist influence, spying and “fifth-column” activity was reported rampant throughout Washington.

And politics in the form of Louisiana was making news this day in 1948 – Earl Long, brother of the late Huey Long and governor of Louisiana of just four months, called an emergency session of the state Legislature for the announced purpose of putting the names of Harry S. Truman and running mate Alban Barkley back on the Louisiana Primary. The names of Truman and Barkley were stricken from the ballot, and those of Dixiecrats Strom Thurmond and Fielding Wright were substituted in an unprecedented move by the state’s Central Committee of the Official Democratic Party in Louisiana. Governor Long said he was for State’s Rights, but he feared it would place the state in an “improper light”, if the voters were not allowed to make their own choice at the polls. But the law will have to be amended in order to make a place for the States Rights and Democratic nominees on the ballot. And so the call for an emergency session slated for 10:00 that evening. Coincidentally, the appearance in Washington of newly elected Russell Long, Huey’s 29 year-old son had many speculating the long shadow of the Long dynasty would be around for a while.

And that’s a little of what went on, this first day of Fall – September 22, 1948, as presented by The News Of the World from NBC Radio.