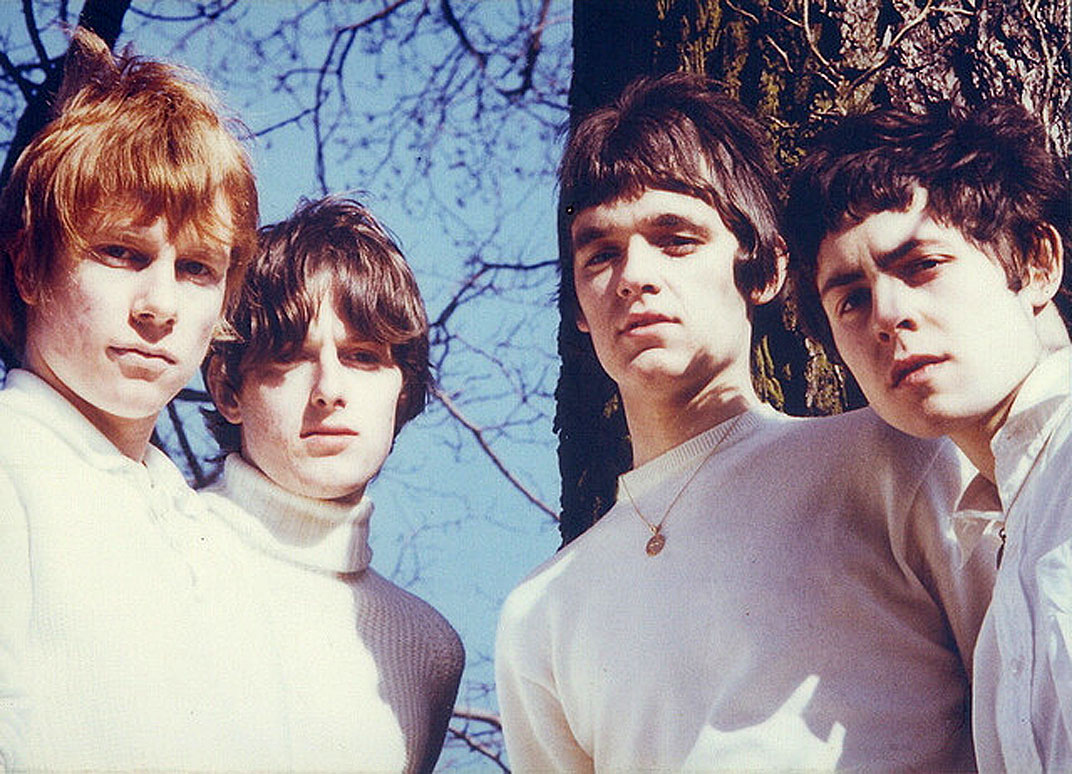 John's Children - with the inimitable Marc Bolan (r) - the other-worldly writing was on the wall.

John’s Children – with the inimitable Marc Bolan (r) – the other-worldly writing was on the wall.

Fans of Marc Bolan and T. Rex are well aware of Bolan’s early endeavors. And the period with John’s Children stands out as a definite harbinger of things to come. Although they had really only one hit (in the U.S.) – the milestone Smashed, Blocked, John’s Children came at the right place and at the right time – right at the end of 1966, ushering in 1967. The hit came as a complete surprise, not only to the band but the producers of the single (Ray Singer and Simon Napier-Bell). Their follow-up singles did very well in the UK and Europe, but failed to get noticed in the States. Shortly after this session, Marc Bolan would leave and start what would later be known as T. Rex – and the rest, as they say, is history.

John’s Children were active for less than two years and were not very successful commercially, having released only six singles and one album, but they had a big influence on punk rock and are seen by some as the precursors of glam rock. In retrospect the band has been praised for the impact they had, and their singles have become amongst the most sought-after British 1960s rock collectables.

Music critic Richie Unterberger at AllMusic described John’s Children as an “interesting, if minor, blip on the British mod and psychedelic scene”, but added that because they were better known for their “flamboyant image and antics” rather than the music they made, they “are perhaps accorded more reverence by ’60s collectors and aficionados than they deserve.” In a Chris Townson obituary published in The Independent in February 2008, Pierre Perrone wrote that John’s Children’s live performances had “raw energy and power chords worthy of The Who.” Perfect Sound Forever columnist Richard Mason said that John’s Children “made a fine upstanding racket. Guitars and drums are thrashed within an inch of their lives; vocals are intoned with, one might hazard a guess, a grin on the face of the protagonist.” Their lyrics were “generally disrespectful and crazed” and their music was “eccentric, loud, irreverent and to the point.” Mason believes that musically the band was not as bad as generally perceived: “They sound as if they can actually play but would rather enjoy themselves, which is no mean feat.” He said that they came from an era that is “for the most part misunderstood, either cloyingly romanticised or short-sightedly vilified”, and today the story of John’s Children is “relegated to a condescending historical footnote.”

Despite having little success, John’s Children were a heavy influence on punk rock, with their shambolic stage presentation and headline-grabbing controversies. AllMusic called them “pre-glam rockers of sorts”, and The Illustrated New Musical Express Encyclopedia of Rock said that John’s Children “have claims to being the first-ever glam rock band.”[ Notwithstanding their brief tenure in the spotlight, the group went on to achieve a cult following that persists today. Their handful of singles have become amongst the most sought-after British 1960s rock collectables A copy of their unreleased single, “A Midsummer Night’s Scene” was auctioned in 2002 for £3,700. Their controversial song “Desdemona” was covered by several bands, including punk rock band The Jam.

But as a reminder of just how Psychedelia was grabbing audiences in 1967, here is a session John’s Children recorded for the popular Saturday Club on BBC Radio 1 – from June 6, 1967.

The world was turning paisley quickly – and John’s Children were right at home.

Play loud – apologies about track 3 – the original was badly damaged and an aircheck had to substitute – but you get the idea anyway.