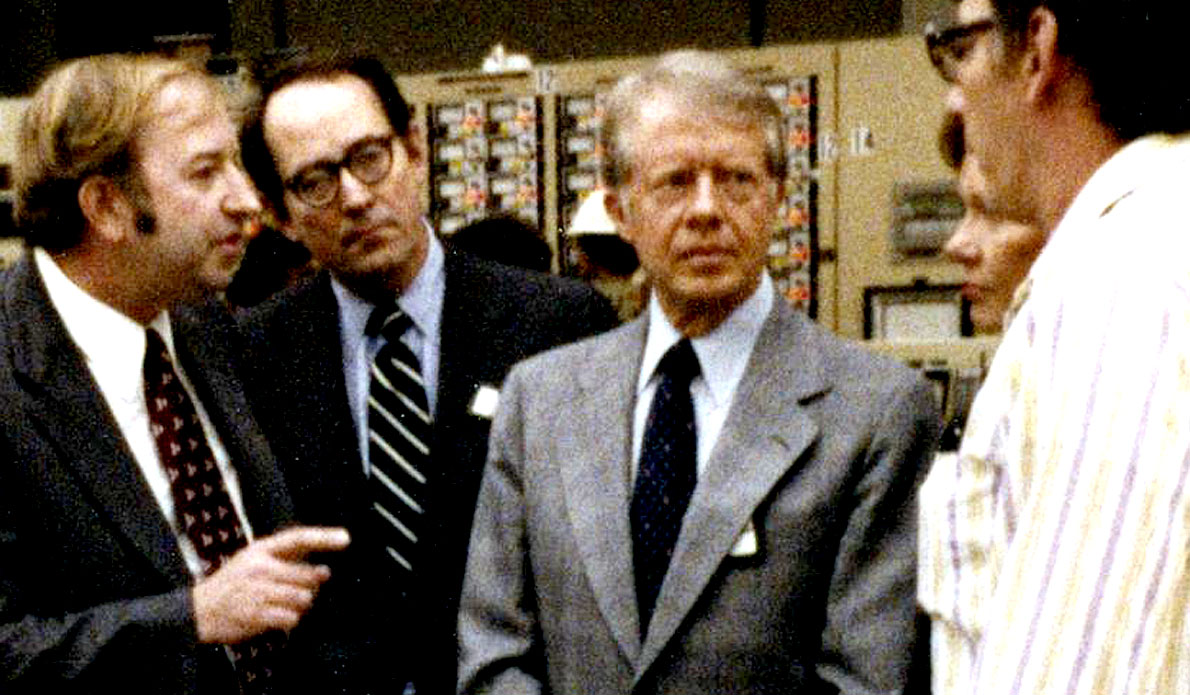 April 1, 1979 – the situation at the 3 Mile Island Nuclear Power Plant had already gone into the history books as the worst Nuclear Power Plant accident in U.S.history. On this day, the situation was reported as “no change”, despite speculation and rumors that a partial meltdown had occurred. Fear, panic and a sense of helplessness gripped the residents around the 3 Mile Island Nuclear Power Plant – most had evacuated, but many also stayed. And since this April 1st in 1979 was a Sunday, residents were crammed into the local church, looking for answers the Nuclear Regulatory Commission and Metropolitan Edison seemed unable to give.

President Carter flew to the scene of the accident, and toured the site; making a personal inspection of the damage and getting first-hand reports on the situation. He emerged later to give an impromptu Press Conference and tried his best to allay fears. not only to the people living within a five-mile radius of the damaged plant, but also to the American people, who were nervously eyeing similar Nuclear Power plants in their own cities and towns.

So on this day the world waited and held its collective breath. There was other news, but it seemed to take a distant backseat, at least in the U.S., as engineers worked frantically to stop a serious disaster from getting worse. Here are bulletins, news reports and President Carter’s Press Conference outside the 3-Mile Island Nuclear Power Plant on April 1, 1979.

And while you’re reliving some of the more nail-biting moments of history, please consider chipping in what you can, and make your Tax Deductible donation to help keep Past Daily up and running and the Archive (where all these historic news items come from) digitizing, preserving and making available to you to listen, download and share. It’s our Annual Past Daily Spring Fundraiser, we’re only here a couple weeks out of the year to state our case to you and hope you like what we do enough to contribute. We’re not asking a lot from a few of you – just a little from everyone who comes by each day and bookmarks us and tells your friends about us, to chip in what you can and help spread the word. All you have to do is click on the link in the box below and make your pledge and take us off on your Taxes – we’ll be grateful, you’ll be happy and the world will be a better place for it – well . . .at least a more informed place. We count on people like you for your kindness and generosity and we give it back by offering thousands of hours of history, information, news and Music – a world at your fingertips. So please do what you can and we’ll be forever grateful.