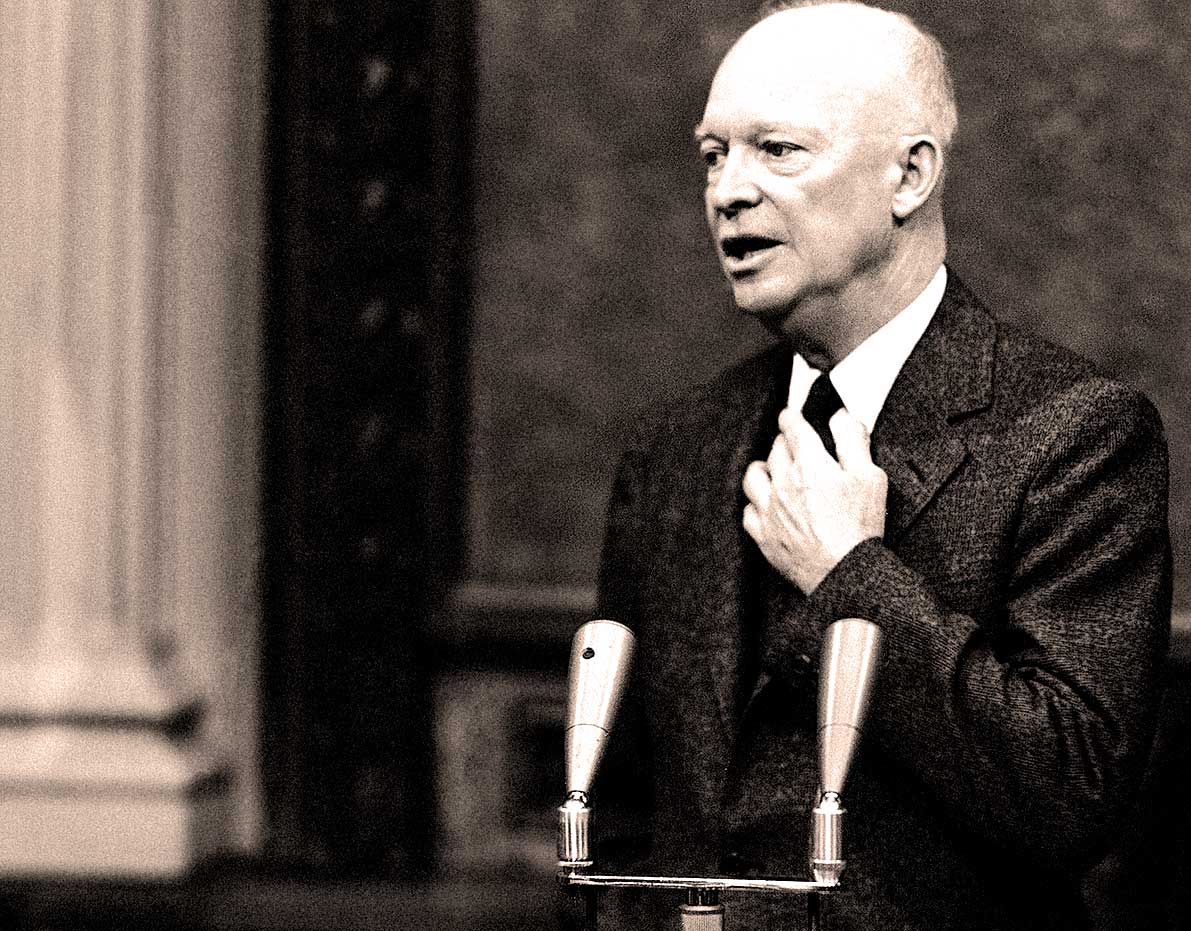 April 4, 1959 – President Eisenhower, in an address to the students at Gettysburg College, talked about our nations security and the potential hotspots around the world in 1959. Although it didn’t seem like much at the time, Eisenhower spoke about the situation in Southeast Asia, and the former French colony of Vietnam:

President Eisenhower: “Let us consider briefly the country of Viet-Nam and the importance to us of the security and progress of that country. It is located, as you know, in the southeastern corner of Asia, exactly halfway round the world from Gettysburg College.

Viet-Nam is a country divided into two parts, like Korea and Germany. The southern half, with its 12 million people, is free but poor. It is an underdeveloped country; its economy is weak, average individual income being less than $200 a year. The northern half has been turned over to communism. A line of demarcation running along the 17th parallel separates the two. To the north of this line stand several Communist divisions. These facts pose to south Viet-Nam two great tasks: self-defense and economic growth.

Understandably the people of Viet-Nam want to make their country a thriving, self-sufficient member of the family of nations. This means economic expansion.

For Viet-Nam’s economic growth, the acquisition of capital is vitally necessary. Now, the nation could create the capital needed for growth by stealing from the already meager rice bowls of its people and regimenting them into work battalions. This enslavement is the commune system, adopted by the new overlords of Red China. It would mean, of course, the loss of freedom within the country without any hostile outside action whatsoever.

Another way for Viet-Nam to get the necessary capital is through private investments from the outside and through governmental loans and, where necessary, grants from other and more fortunately situated nations.

In either of these ways the economic problem of Viet-Nam could be solved. But only the second way can preserve freedom.

And there is still the other of Viet-Nam’s great problem–how to support the military forces it needs without crushing its economy.

Because of the proximity of large Communist military formations in the north, Free Viet-Nam must maintain substantial numbers of men under arms. Moreover, while the Government has shown real progress in cleaning out Communist guerrillas, those remaining continue to be a disruptive influence in the nation’s life.

Unassisted, Viet-Nam cannot at this time produce and support the military formations essential to it or, equally important, the morale–the hope, the confidence, the pride–necessary to meet the dual threat of aggression from without and subversion within its borders.

Still another fact! Strategically south Viet-Nam’s capture by the Communists would bring their power several hundred miles into a hitherto free region. The remaining countries in Southeast Asia would be menaced by a great flanking movement. The freedom of 12 million people would be lost immediately and that of 150 million others in adjacent lands would be seriously endangered. The loss of south Viet-Nam would set in motion a crumbling process that could, as it progressed, have grave consequences for us and for freedom.

Viet-Nam must have a reasonable degree of safety now–both for her people and for her property. Because of these facts, military as well as economic help is currently needed in Viet-Nam.

We reach the inescapable conclusion that our own national interests demand some help from us in sustaining in Viet-Nam the morale, the economic progress, and the military strength necessary to its continued existence in freedom.

It wouldn’t be until a few years later that our involvement would increase; from financial aid and military supplies to Military Advisers, to an all-out shooting war. And the situation had been brewing since the French were defeated at Dien Bien Phu and France quit its colonial claim to the country – slowly we were getting involved, but we were distracted by Berlin and Europe and hardly noticed what the other hands were doing.

Such is history. Here is that address from Gettysburg College, given on April 4, 1959.

While you’re listening, please consider your Tax Deductible contribution to Past Daily’s annual Spring Fundraiser – we do this every year to raise enough money to keep the site up and the Archive busy digitizing, preserving and making available the thousands of hours of rare broadcasts, news, interviews and Music. So please, give what you can – chip in a little or a lot, but chip in something. Click on the link in the box below and make your pledge today.