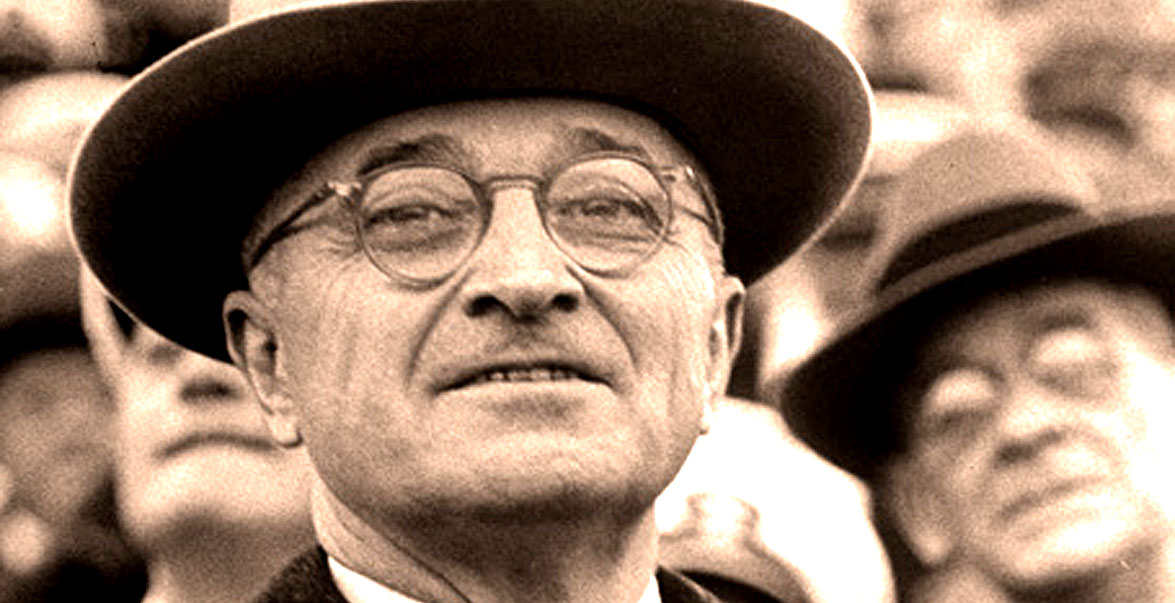 April 6, 1946 – President Truman, addressing an assembled crowd in Chicago, celebrating Army Day 70 years ago. On this day in 1946, it was almost a year to the month the War in Europe came to a close and we embarked on a new phase of political power in the world. On this day it was an assessment of what was left to do, what had been accomplished and what sort of future lay ahead.

And even though the winds of a Cold War were just beginning, it was still a time to be optimistic and to look ahead at how this new world was going to look.

President Truman: “It is no answer to say that we do not need a large army in this atomic age. No one knows yet precisely what we shall need–in terms of infantry, artillery, pilots, paratroopers, ships, radar, planes, rockets, or bombs.

We do know this: modern war calls for the total mobilization of all men and all energies. We know, too, that we are not likely again to be given 2 years or more by heroic allies to get ready. Next time–if there must be a next time–we are likely to be the first target.

And so on short notice, each man must be ready to take his place and go forward-not at the end of a few months, or a few years, but immediately. Otherwise it may be too late.

There is only one way that each man can be ready, and that way is by training ahead of time. He will not be trained to do things which are obsolete. He will be trained to do only whatever is required in modern warfare. A nation like ours, whose responsibility is leadership against tyranny and oppression, surely cannot expect less of its people than that they be made ready to fight or to work to preserve the Nation.

Unification of the Armed Forces, temporary extension of the Selective Service Act, and a universal training program-those are the foundation stones which hold the promise of a strong nation. They are essential if we are to maintain our leadership on the road to peace and freedom.

Now, even in an election year like this, nobody should play politics with the national safety.

The desire for peace and freedom is the very root of our foreign policy. I stated the fundamental foreign policy of the United States in New York City on Navy Day last October, and in my message to the Congress January 21, 1946. That policy remains the same today. It is based squarely upon the pursuit of peace and justice; and it definitely rejects any selfish advantage for ourselves.

The immediate goal of our foreign policy is to support the United Nations to the utmost.

It is my conviction that the Security Council of the United Nations, now meeting in New York City, is fully capable of reaching agreements between the peoples of the world–however different their traditions and philosophies, and however divergent their interests. The essential requirements to that end are that its member nations follow the dictates of justice, that they consider and respect the legitimate aspirations and needs of their fellow members.

All citizens of the United States worthy of the honor of that citizenship are determined to preserve our democratic form of government. They will not, on the other hand, interfere in any way with the governments of other peace-loving people.”

70 years ago today, on April 6, 1946, the world was at peace – an uneasy and fragile peace, but peace nonetheless. With opening addresses by General Eisenhower and Chicago Mayor Edward J. Kelly, President Truman laid down his plan for the future and was hoping Congress, and the American people would support it.

And while you’re listening – We do a lot of history here – and a lot of different kinds of history. From wars and peace to Arts, Music and the passings of legends – we’re a little bit of everything. But that’s what we’re here for – to give you as broad a picture as possible of life around you – how situations in the past have influenced us in the present and will shape our futures. And for that reason, we have our annual Past Daily Spring Fundraiser to ask for your support – to chip in whatever you can and to help us meet our goals and to help us continue giving you all this history and rare moments, so you can play them at your leisure and be reminded that some things which happen in life are repeats from before. So, if you could click on the link in the box below, and make your Tax Deductible Donation, in whatever amount you’re comfortable with, we will be more than happy and grateful. We’re here because you are and your support has been incredible. Let’s keep it up.