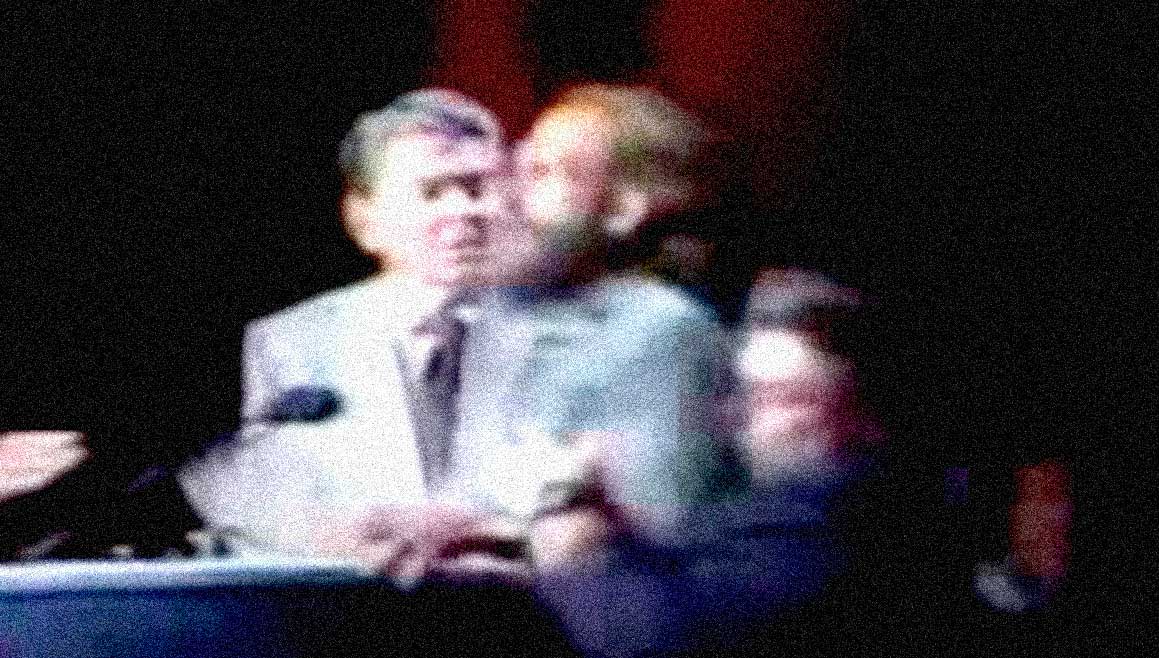 April 13, 1992 – Big scare for former President Ronald Reagan on this day. While delivering a short speech, thanking the National Association of Broadcasters for an award he had jusut received at their annual convention in Las Vegas, an unknown man ran up to the stage and attempted to take over the microphone. Smashing the glass award to bits and shouting protests over an upcoming nuclear test, he was immediately pounced on by several Secret Service agents and dragged off. President Reagan was hustled off the stage. After a few minutes, Reagan returned to the stage, finished he speech and quipped “now I’m gonna go find that guy”. The assailant was identified as Richard Springer, head of the anti-nuclear group 100th Monkey. He was charged with assault on a Federal officer. Other members of the group, who were in town for a series of protests said they had no idea Springer was planning the escapade.

Meanwhile, in Chicago – a broken water-main in downtown Chicago forced the closure of all commercial and government buildings and forced hundreds of thousands of people to evacuate the area. Water from the Chicago River leaked into utility tunnels and flooded building basements, risking explosions from water hitting the high-voltage lines. Chicago Transit buses were put into rush-hour mode, helping evacuate people from the area.

On Capitol Hill – President Bush was putting the heat on Labor Unions and the Democrats who supported them by spotlighting a three and a half year old Supreme Court decision. The Beck ruling prohibited unions from spending dues on political causes if the objecting union worker is not a member. Bush called for a posting of the ruling in public work places, informing workers of their rights. The ruling would also spell how union dues were spent. Democrats objected, saying the Bush moved gave hypocrisy a bad name and that it benefited Right wing interest groups. As a reaction, the AFofL-CIO was moving closer to endorsing Bill Clinton as President.

And word from South Africa disclosed Black leader Nelson Mandela was separating from his wife Winnie. The couple never really had a normal married life, with Nelson imprisoned for 27 years and Winnie becoming the symbol for Black resistance to apartheid. Nelson Mandela gave no specific reason for the separation, other than saying he still loved and supported his wife, but that numerous differences made it impossible for them to live together. He went on to say that the decision was not based on recent allegations of criminal activity by his wife, who was convicted the previous year for kidnapping and an accessory to assault.

And while you’re listening, please take a minute to make your Tax Deductible contribution to Past Daily’s Spring Fundraiser.We do this a couple times a year and we need your support to help our website stay up and the archive to continue its daily task of preserving and digitizing the thousands of hours of history you get to hear at Past Daily. A little goes a long way, so anything you can chip in is gratefully appreciated and used towards making the site bigger and better. We can’t do it without you – there’s a few days left before we have to end it, so in the meantime, please donate what you can and help keep history alive.