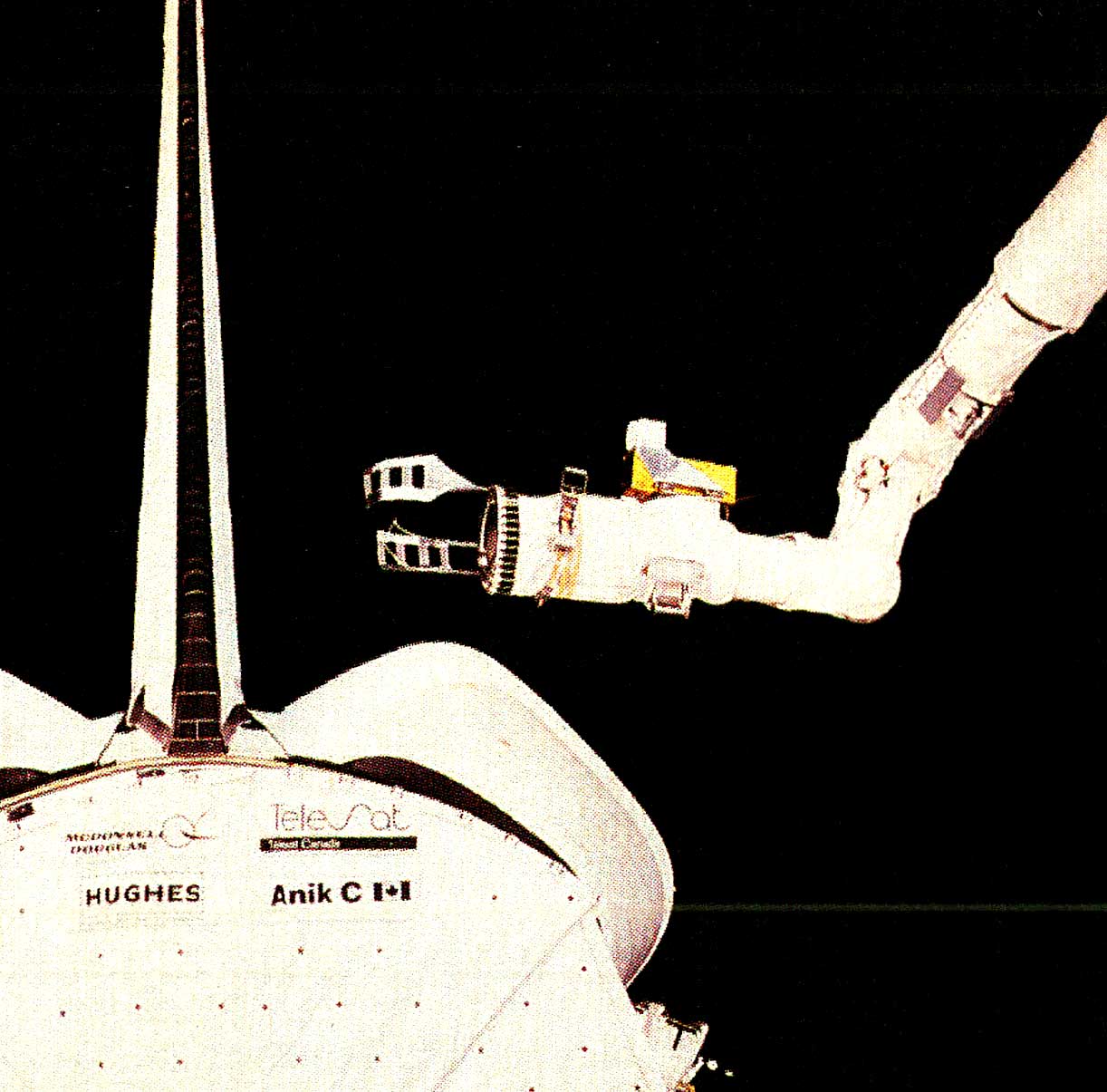 Busy day in space, April 15, 1985. The Shuttle Discovery crew was up early, readying for a battery of tests and an attempt to rescue a wayward satellite, spinning out of control.

Hopes were pinned on an arm, the length of a hockey stick, with a device which would flip a switch on the unresponsive satellite, in order to stabilize it and put it back on course. It was a simple matter of flipping a 4-inch switch to the “on” position. And while one of the Shuttle Astronauts could conceivably do it, the risks in attempting such a maneuver were greater than just doing it via “the gizmo”.

Meanwhile, back on earth – the world’s fifth artificial heart recipient was undergoing a surgical procedure this day. 62 year-old Jack Burcham was having a drainage tube inserted into his chest, following his six-hour implant operation the previous day. Burcham bled so heavily, that doctors at Louisville’s Humana Hospital had to replace more than twice the amount of blood in Burcham’s body. As of this morning, Doctors reported Burcham’s condition as “satisfactory”. The procedure on inserting the tube was to reduce pressure on Burcham’s lungs.

On Capitol Hill – debate over President Reagan‘s budget package and compromise, with all eyes on Social Security as one of the objects of deep cuts in Domestic spending. Opponents was qluickly focusing on the proposal to hold Social Security cost of living increases to 2% a year over the coming three years. The House committee was busy calling witnesses in to testify, claiming hundreds of thousands of the elderly would be driven below the poverty line. Some thought the Social Security issue was tampering with the system and breaking President Reagan’s promise to leave Social Security alone. Although many felt it wasn’t going to hurt “that much”.

And that’s just a sample of what was going on, this April 15th in 1985, as reported by The CBS World News Roundup.

Okay – we’re heading into our third weekend of the Past Daily Spring Fundraiser and we’re hovering at the point of desperation. We really need to hear from you this weekend – to chip in what you can, and to help us keep Past Daily up and running and the archive continuing its daily job of preserving, digitizing and making available thousands of hours of historic audio; newscasts, events, culture, Music and news. It’s all here and that’s what makes Past Daily so unique. So please, for the price of a cup of coffee, you can help us preserve and make available endless hours of history-as-it-happened, and those voices which shaped our future and cemented our history. Just click on the link in the box below and make your contribution, in whatever amount you want – it all helps and it’s all crucial. Do what you can, and tell your friends.