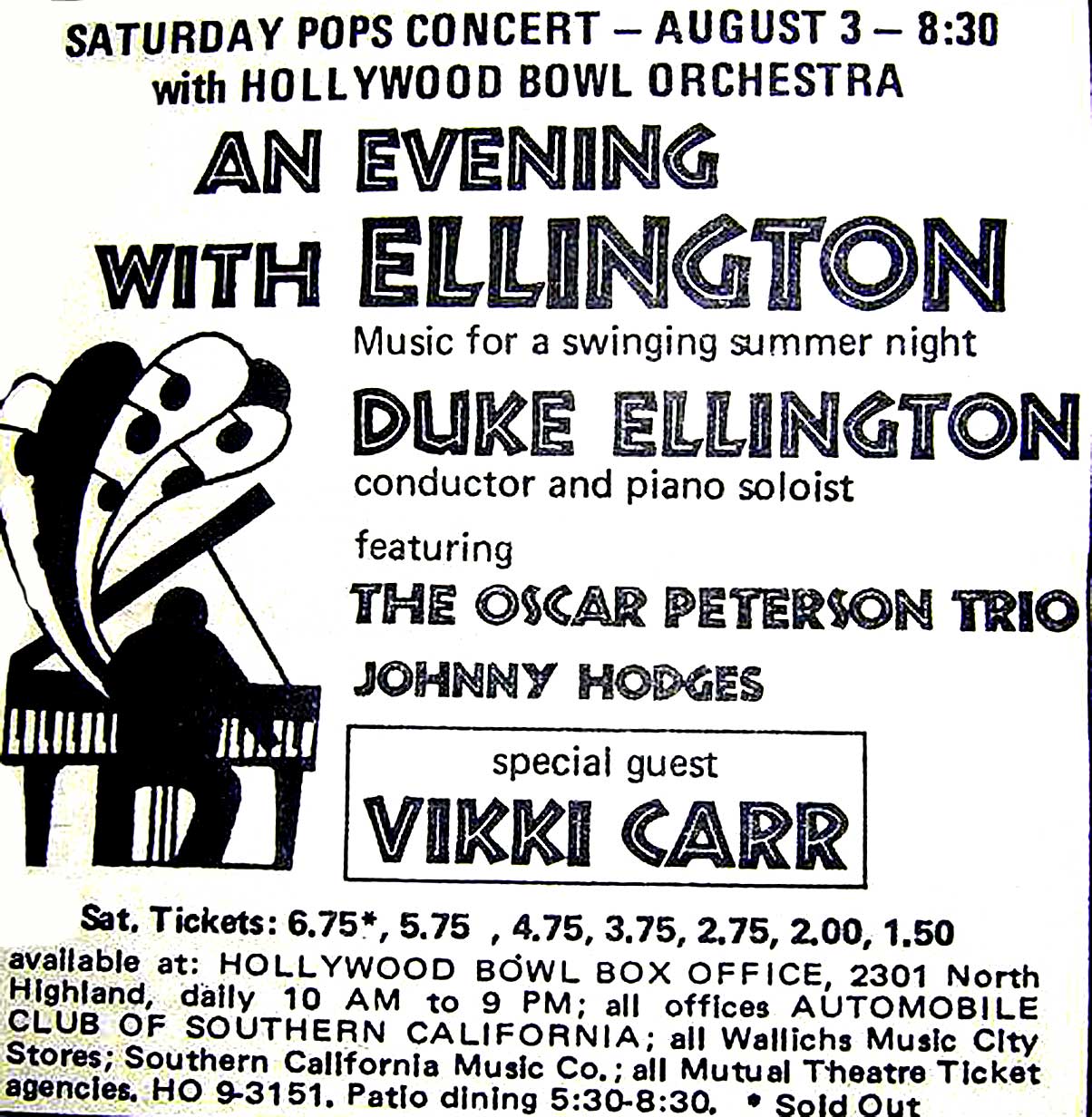 Duke Ellington and guests - they promised a Swinging Summer Night - they got one. And it was sold out.

Duke Ellington – Jazz At The Bowl 1968 – Past Daily Downbeat

Duke Ellington and guests – they promised a Swinging Summer Night – they got one. And it was sold out.

Duke Ellington, along with special guests Oscar Peterson, Vickie Carr and Johnny Hodges in a sold out concert at The Hollywood Bowl on August 3, 1968. For purists, the inclusion of Vickie Carr may seem strange, since the bulk of her audience was decidedly Pop – still, Jazz was a lot more inclusive 50 years ago than it is now, and her backing band featured a plethora of noted session musicians with Jazz stripes in the ranks.

This was what The Hollywood Bowl was all about in 1968, when it wasn’t hosting L.A. Philharmonic or Rock Concerts – appealing to the middle-of-the-road audience who leaned towards Jazz of the Big Band variety, and with the legendary Oscar Peterson as opening act.

This concert has not been available commercially, in fact it was never supposed to exist. Around this time in 1968, the Hollywood Bowl staff were visited by representatives of the Musicians Union, and informed that their regular policy of recording these concerts, which they had done since the first tape machine was installed by Ampex in the late 1940s, was illegal, and all those tapes were ordered destroyed. Eyewitnesses told of industrial sized dumpsters, pulling up and hauling off thousands of reels of concerts, going back to the 1949 season, all to be destroyed. Well . . .most of them.

Precious few survived; stashed in cabinets, under stairwells, in utility closets. Over the years they’ve been found, discovered and turned up in all sorts of places and in all kinds of collections. This was one of those tapes. I’ve run it as excerpts several years ago, via my other site, but this is the first time the entire concert is being run. All two hours worth.

So I split up the concert into two parts – the first part is Oscar Peterson and Vickie Carr – and the second part is Duke Ellington. A couple glitches here and there, but for the most part, the concert is in pristine quality, belying it’s age.

And while you are – just remember that this tape and thousands more like it are only available from Past Daily – we have rare stuff, unheard concerts, lost concerts and interviews (you heard the lost Billie Holiday interview, right?) – news that’s been forgotten about, history that’s been uncovered – all this and a lot more is what you get to experience every day from Past Daily. So, here we are, coming up on the last few days of our Spring Fundraiser and we’re asking you to chip what you can – if you like what we’re doing and want us to keep doing it, we need your help and your tax deductible contributions do just that. They make it possible for Past Daily to continue and it makes it possible for the Archive to keep preserving and restoring these thousands of hours of rare and priceless recordings – so you can listen to them whenever you want. We don’t think History should be kept in a locked room, so that one day somebody comes along and orders it destroyed – we think it should be alive and available and accessible to everyone. And you can help keep that happening – by making your tax deductible donation to keep history alive and to keep it vital. We’re here because of you and we’ll stay here with your help.

Just click on the link in the box below and make your commitment to keeping history alive, and getting a Premium as our way of saying thanks and telling your friends. We’ve got 6 days to make it all happened and we can do it with your help. Go team!