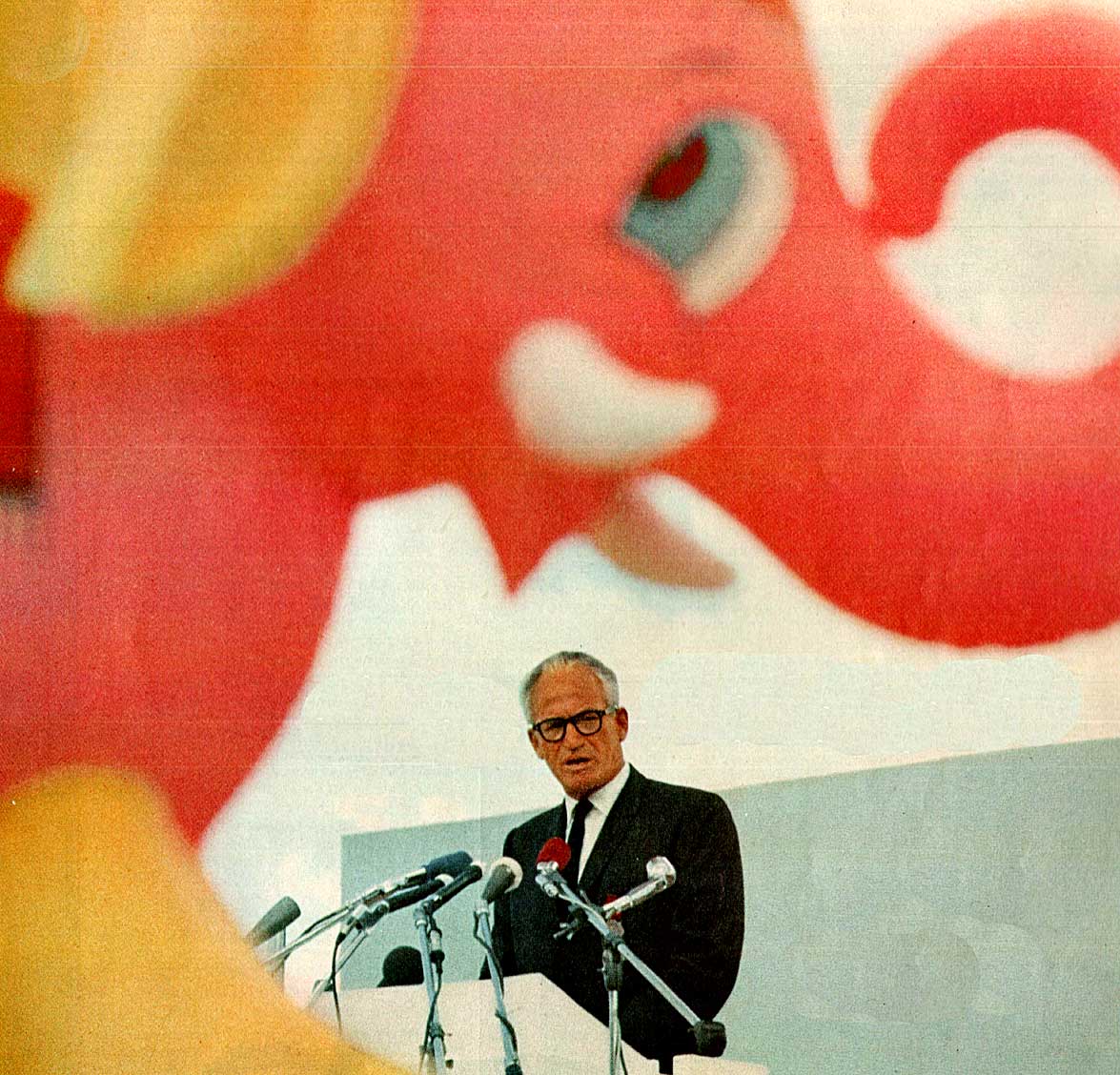 The 1964 Republican standard bearer - Barry Goldwater - a decided shift to the right.

The 1964 Republican standard bearer – Barry Goldwater – a decided shift to the right.

As this election year gets closer to the respective conventions, I thought it would be a good idea to take a look at some of those Presidential races from the past. This one; Barry Goldwater’s ascendency to standard bearer for the Republican Party in 1964.

Barry Goldwater represented a shift to the right in the Party; a decided lean towards hard conservatism. Prior to that, the party had its liberal wing and its moderate wing, and this was the primary elements of the GOP which took back the White House in 1952. But the writing was on the wall over the great ideological shift, some say going back to 1954, when the Conservative movement began in earnest. It wasn’t fully organized by the 1960 election, but by the 1962 off-year election, the movement was organized and braced to stage a takeover of the Party. Barry Goldwater represented the new-breed of conservative – the one who railed against big government and taxes and who represented a shift in Civil Rights policies.

People have come to think that it was the Democratic Party who were all for Civil Rights and who vigorously campaigned for landmark Legislation in the 1950s. Not so. The Democratic Party, at least the Southern branch, represented States Rights, Segregation in housing and schools – threatened to break away in 1948 and became known as Dixiecrats. While the GOP in the 1950s, under Eisenhower introduced the 1957 Civil Rights Bill. So, the GOP represented a much more social values Party than the Democrats during that time.

What has happened over the years, has been a shift – the Democrats are now perceived as the Party of Social issues and the GOP is perceived as the party of less government and bigger tax breaks.

Barry Goldwater’s victory represented a death-knell to the liberal wing of the GOP. The Party of Nelson Rockefeller, William Scranton and Henry Cabot Lodge was now a thing of the past, and it was Barry Goldwater, considered the “tough, plain spoken candidate” who was now the new face of the Republicans.

To remind you, or to acquaint you with the Presidential Election of 1964 and just how much the political parties in this country have changed, here is a radio documentary produced by NBC – The Republican Party Of Barry Goldwater – produced in July of that year, on the heels of Goldwater’s victory at the Convention.

And while you’re listening – we are only 6 hours from ending our Past Daily Spring Fundraiser – we need your help and we need to hear from you between now and when we end. It means a lot to us and it means a lot to you, the ones who have generously contributed and made your donations to keep us up and running – we need the rest of you – the ones on the fence – the ones who wait for the last minute. We need you and we are desperate for your support – So please, click on the link in the box below and make your Tax Deductible contributon while there’s still time. We’re crossing our fingers and hoping you will say yes, you’ll be part of Past Daily.